The environmental agreement signed yesterday between Israel and Jordan is the first such development ever between the two countries. 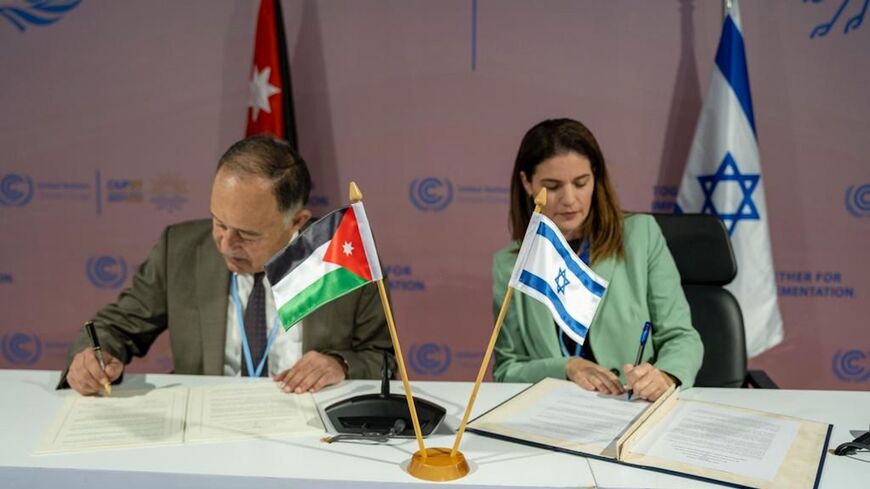 In Sharm al-Sheikh yesterday, Israel’s Environmental Protection Minister Tamar Zandberg and Jordan’s Water and Irrigation Minister Mohammed Al Najer signed a declaration of intent to partner in the ecological rehabilitation and the sustainable development of the Jordan River.

Zandberg noted, “This is the first environmental agreement [between Israel and Jordan] since the peace treaty. It’s a critical agreement for the restoration and the prosperity of the Jordan River, with its religious, cultural and ecological significance for our region.”

“Cleaning up all the harm done to the river, bringing back the water flow and reinforcing the natural ecosystems of the river will offer health and prosperity to all the populations residing in its environs," Zandberg added. "The signing today expresses the willingness of both Israel and Jordan for environmental cooperation, as we are neighboring countries with a river between us. We must work together to rehabilitate nature so that we can build a better future for the region, especially on the backdrop of the global and regional changes which endanger all of us.”

The Jordan River protection agreement follows an Israeli decision last July to clean up and rehabilitate the long-polluted Jordan River.

Another milestone in Israel-Jordan relations was marked earlier this month, also at COP27, where Israel, Jordan and the United Arab Emirates signed a memorandum of understanding to accelerate the implementation of a cooperation deal on a water project in exchange for clean electricity. That agreement was originally signed in Jordan a year ago, but advanced slowly because of a series of technical and administrative obstacles.

Bennett met with Jordan's King Abdullah II in his Amman palace on July 2021. As foreign minister, Lapid met and spoke on the phone several times with his Jordanian colleague. Last July, Lapid as prime minister met with Abdullah in Amman. Defense Minister Benny Gantz met with the king last January and last August, Israel’s Population Authority approved the entry into Eilat from Aqaba of 2,000 Jordanian workers to be employed by city’s hotel industry.

During the last government of Prime Minister Benjamin Netanyahu, bilateral ties deteriorated significantly on the backdrop of tensions in Jerusalem and Temple Mount and noticeable mistrust between Netanyahu and Jordan's king. Abdullah was bitter over several incidents including the 2017 shooting and killing of two Jordanians in Amman by an Israeli Embassy guard. Netanyahu was bitter over a 2021 incident that made  him cancel his trip to the Emirates when Jordanian authorities did not authorize his flight to cross Jordan's skies in time.

On Nov. 14, Abdullah phoned Netanyahu to congratulate him on his election victory. Other reports said that since his win, Netanyahu has sent reassuring messages to Amman pledging not to change the status quo on the Temple Mount.