Lapid’s legacy to include better relations between Israel, Jordan

First as foreign minister, and then as prime minister, Yair Lapid identified rehabilitating commercial and diplomatic ties with Jordan as top priority for Israel. 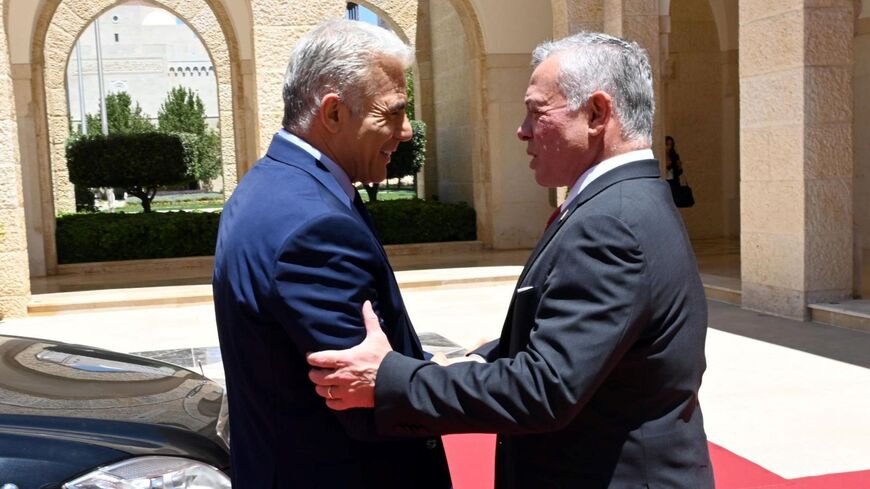 Israel’s Population Authority announced yesterday that 2,000 Jordanian workers will enter Eilat from Aqaba, to be employed by Eilat’s hotel industry. Contrary to COVID-time regulations, the Jordanian workers can now go home after work and come back the next day without being required to stay and sleep in Israel.

This decision should not only help the tourism industry, in dire need of workers, but also contribute to Israel-Jordan relations — which have been improving in recent months in diplomacy, economy and security.

Prime Minister Yair Lapid met July 27 with Jordanian King Abdullah II at the royal palace in Amman. It was their fourth meeting in five months, but the first one since Lapid was appointed prime minister. Shortly afterward, Lapid tweeted, “Thank you, Your Majesty King Abdullah for the warm welcome today in Jordan. Strong ties between Israel and Jordan mean a more stable and prosperous region. Together, we’ll continue building on our peace for the benefit of both our people.”

In his tweet in Hebrew, Lapid noted, “We emphasized the importance of a close personal relationship to preserve regional stability and for reaching real achievements for both nations and for the entire region. We discussed the [mid-July] visit of US President Joe Biden to Israel and the region, the possibilities and opportunities that this visit brought with it, including everything related to the regional [security] architecture.”

Indeed, Lapid followed up quickly. On July 31, he tweeted, “The Jordan Gateway Industrial Park will become one of the largest-ever joint business ventures between Israel and one of our neighbors. What does this historic project mean for Israel and Jordan? More jobs, Stronger economies, Prosperity and lasting peace. Thanks to today’s government decision to move forward with this project, as well as hard work by Ministers Esawi Frej and Merav Michaeli — Israel’s ties with Jordan are reaching new heights.”

This feeling of accomplishment was visible also in the statement of Frej, who said “Our efforts over the past year bore fruit today with the government's decision to renew the promotion of the Jordan Gateway Industrial Park, shared by Israel and Jordan. After years of stagnation, we managed to breathe life into this important project that many have already eulogized in the past.”

The government established a year ago by Naftali Bennett and Lapid worked from the very start to rehabilitate bilateral ties with Jordan, damaged under the Netanyahu government. These efforts included visits in Amman by Bennett (as prime minister), Lapid (as foreign minister), Defense Minister Benny Gantz, and President Isaac Herzog, who most recently visited Amman June 29, as part of Israel’s preparations for Biden's visit.

Bennett and King Abdullah did not see eye to eye on Jerusalem and the Temple Mount compound, but the two governments prevented the disagreement from turning into a diplomatic crisis. In fact, Herzog played a central role in appeasing tensions when he met with the king at the end of March, when Israel suffered terror attacks and rising tensions on Temple Mount. At the time, Abdullah condemned the violence, expressing his condolences to the families of the Israeli victims, in a statement widely quoted by the Israeli press.

Still, the issues of Temple Mount and the Palestinians keep influencing Israel’s ties with Jordan. Jordan’s foreign minister was absent from the 2022 March Negev summit, organized by Lapid, which brought together the foreign ministers of Israel, the US, Emirates, Bahrain, Egypt and Morocco. Similarly, the director general of the Jordanian foreign ministry did not participate in early June at the Negev Summit Steering Committee meeting in Bahrain.