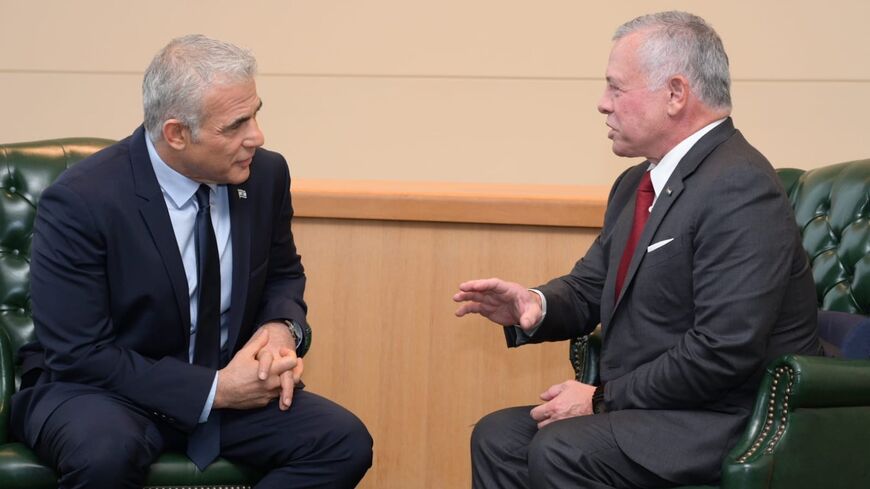 After his meeting with the King, Lapid tweeted, “Jordan is an important strategic partner of Israel. His majesty and I discussed bolstering and broadening cooperation between our countries as well as maintaining calm in the region.” This morning, Lapid tweeted, “Yesterday, I had a productive meeting with Turkish President Erdogan, the first meeting between the President of Turkiye and Israel’s Prime Minister in nearly 15 years. Relations between Israel and Turkiye are key for regional stability and bring tangible benefits for both countries.”

Later in the day, Lapid met with Greek Prime Minister Kyriakos Mitsotakis and and with UN Secretary General Antonio Guterres.

In the room with Abdullah

Lapid’s meeting with Abdullah was not an easy one. Violence has been escalating in the West Bank in the last few weeks, with ramped up Israeli military raids. Addressing the UN shortly before his meeting with Lapid, the Jordanian monarch warned against undermining the status quo at the Temple Mount, saying that the future of Jerusalem was a topic of concern and that “Christianity in the holy city is under fire.” During the meeting, the leaders were informed that an 84-year-old Israeli woman was beaten to death by a Palestinian assailant while walking in the Holon suburb of Tel Aviv.

Lapid reportedly told the king that the escalation in Palestinian violence in the West Bank must be halted before the start of the Jewish New Year Sept. 26, stating, “Israel will not stand idly by and will fight terrorism directed against it in all its forms, and will not allow harm to the security of its citizens.”

Still, Lapid’s office emphasized that the conversation was “an additional expression of the tightening of Israel-Jordan relations, and the continued strengthening of the personal connection between the Prime Minister and the King of Jordan.” Israeli leadership was careful not to react publicly to Abdullah’s statement. Rather, Lapid posted a picture of the two leaders, who last met in July 2022 in Jordan, shaking hands and smiling. Other ministers, such as Defense Minister Benny Gantz have also met with the king in Amman in recent months.

In the room with Erdogan

The meeting between Lapid and Erdogan signaled further rapprochement between the two countries. Lapid’s office said the conversation focused on terrorism against Israelis in Israel and abroad. Lapid reportedly thanked Erdogan for Turkish security cooperation last June, especially Turkish willingness to share intelligence with Israeli counterparts in order to thwart Iranian plots targeting Israeli tourists in Istanbul. Another security matter raised was Jerusalem’s demand that Hamas releases two Israeli nationals and the bodies of two Israeli soldiers held in Gaza for years. The issue apparently came up in relation to Ankara’s ties with Hamas.

Also in the conversation, Lapid welcomed the recent resumption of Israeli flights to Turkey, which were halted due to the travel warning. The Israeli prime minister noted that this development will surely lead to a boost in tourism for both countries. He also addressed the nomination yesterday of Israel’s new ambassador to Ankara, Irit Lillian, as symbol of reconciliation between the two nations.

What this boils down to