The day after Defense Minister Benny Gantz traveled to Jordan and met with King Abdullah II, Israel’s President Isaac Herzog also traveled to the kingdom for a historic visit. 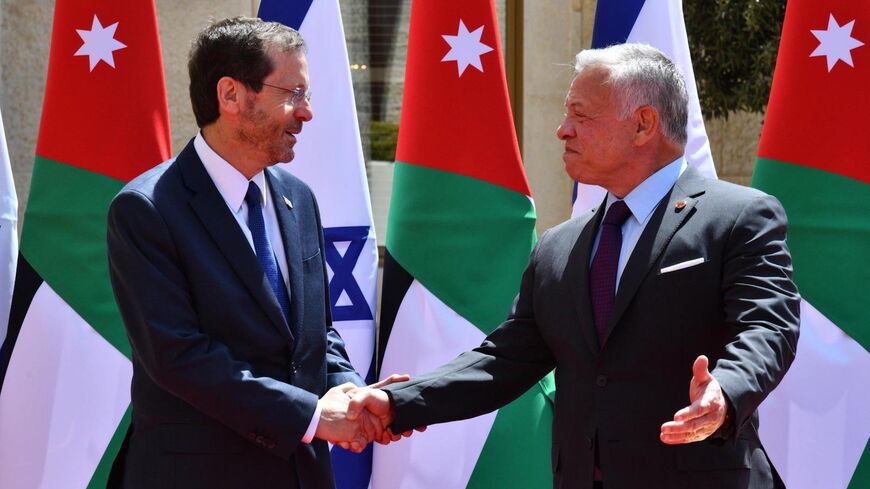 Israel’s President Isaac Herzog traveled today to Jordan and met King Abdullah II at the monarch's invitation. Herzog was received at Al Husseiniya Palace in a ceremony that included an honor guard against a backdrop of Israeli and Jordanian flags. The two leaders met privately, followed by a diplomatic meeting that included several officials from both sides.

Abdullah started the second meeting by condemning the recent terror attacks in Israel, expressing his condolences to the families of the victims. "The conflict has been going on for a long time and the violence that has been created continues to be fertile ground for extremism. I condemn the violence in the name of Jordan," he said.

Herzog thanked the king for his hospitality. "I bring a message of warm regards and friendship from the Israeli people. We have suffered heinous terror attacks in the last 10 days. Eleven innocent lives were taken in terrible attacks by vile terrorists. We must fight together against any type of terror and cooperate for the benefit of the security of our nations."

Herzog paid tribute to the king’s late father, under whose leadership the 1994 peace treaty between the two countries was signed, saying, "We share common values of prosperity and peace based on our peace agreement, which was carved out by the late King Hussein, your legendary father, as well as by the late Prime Minister Yitzhak Rabin. Together we must now move forward, and we are offering an alternative … of people-to-people dialogue, of respect, of speaking to each other, of showing the region that there could be a different way."

Herzog called for furthering partnerships and dialogue toward peace and prosperity for the benefit of the entire region, including the people of Iran. He also made reference to Israeli security concerns, raised before the three recent terror attacks, about possible violence in the sensitive period of Ramadan and Passover, noting, “As we enter these holy days for all three religions, with Easter, Passover and of course Ramadan, we must move toward enabling everyone to practice their beliefs in safety, in security, in calm circumstances. This is what we need to work toward, and we know that there is a constant dialogue between the Israeli government and your government toward that goal as well as all other partners in the region.”

The two leaders reportedly discussed several other issues including deepening bilateral relations and maintaining regional stability with an emphasis on the upcoming holiday period.

After the meeting, Herzog tweeted, "Concluding an important visit in Jordan. I thank King Abdullah II for his warm hospitality and invitation. Israel has suffered heinous terror attacks in the last 10 days. Innocent lives were taken in terrible attacks by vile terrorists, which I thank his majesty for condemning. This is a sad day in Israel, a day of funerals. We must fight together against terror and cooperate for our nations' security. Against yesterday's horrible scenes, we offer an alternative of dialogue and respect between Jews and Muslims, showing the region there's another way."

When Herzog first entered office, Abdullah called him to congratulate. Since then, the two leaders have spoken several times on the phone.

Yesterday, Defense Minister Benny Gantz met with King Abdullah in Amman to discuss concerns over spiraling violence as the holidays approached. It was the third meeting between the two men in recent months. A first secret meeting took place in February 2021 and there was a second public meeting in January this year.

Gantz reportedly presented the king with the measures that Israel intends to take in the coming days to maintain freedom of worship for Palestinians in Jerusalem and Al-Aqsa Mosque during Ramadan as well as other moves intended to improve the lives of Palestinians both in the West Bank and in Gaza.

“The defense minister emphasized to him the importance of maintaining stability and calm and the overall need to fight terror, in particular the Islamic State organization, which is behind the recent terrorist attacks in Israel,” said Gantz’s office.

Before meeting the king, Gantz met with Jordanian Foreign Minister Ayman al-Safadi. Safadi was the only foreign minister from the Arab countries Israel has signed peace and normalization treaties not to attend the March 28 Negev Summit in Israel. The foreign ministers of Egypt, Morocco, the Emirates and Bahrain all attended the summit, as did US Secretary of State Anthony Blinken.

Reports last week revealed that Public Security Minister Omer Bar Lev had also recently met with Safadi in a meeting that also focused on efforts to maintain calm in Jerusalem during the Ramadan.

Since it was formed in June 2021, the Israeli government has made considerable efforts to improve ties with the Hashemite Kingdom. Relations had significantly deteriorated under longtime Prime Minister Benjamin Netanyahu over a serious of incidents and diplomatic crisis, and the king had refused to take Netanyahu's calls. The current government’s efforts included meetings between Foreign Minister Yair Lapid and his Jordanian counterpart, a secret visit to Jordan by Prime Minister Naftali Bennett last July and then a secret visit to Jordan by Herzog in August.