During the meeting, Jordanian King Abdullah II "reiterated the need to maintain calm in the Palestinian territories," according to the royal court. 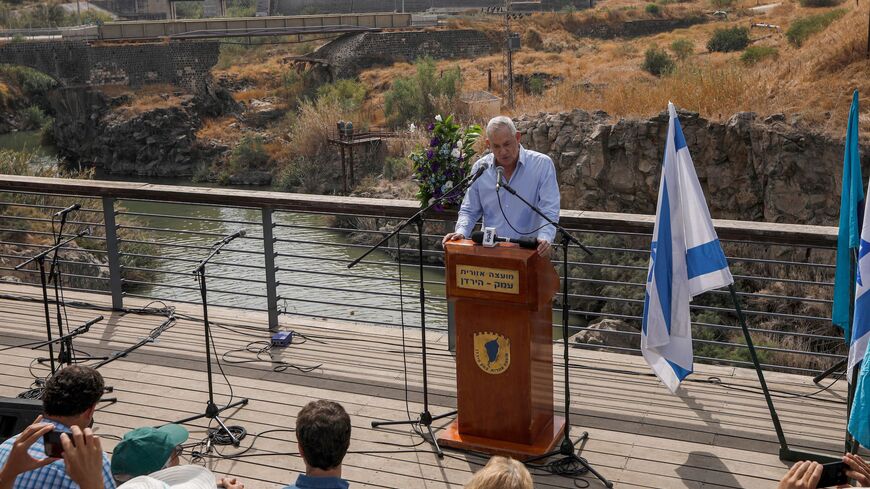 Before he became defense minister, retired Gen. Benny Gantz speaks at the Jordan Valley site of Naharayim, also known as Baqura in Jordan, east of the Jordan river, on Oct. 18, 2019. - JALAA MAREY/AFP via Getty Images

It was an honor to visit the Hashemite Kingdom of Jordan and to be hosted by His Majesty @KingAbdullahII. Our meeting reflected the enduring ties and excellent cooperation between our countries. We are committed to working together for the security and prosperity of our nations. pic.twitter.com/wqx224fH1b

Jordan signed a peace treaty with Israel in 1994, becoming the second Arab country to do so after Egypt. But the Palestinian-Israeli conflict has strained relations. Frequent clashes between Muslim worshippers and Israeli security forces in east Jerusalem, where Jordan has custodianship of over holy sites, is a major source of tension.

During the meeting, the Jordanian monarch “reiterated the need to maintain calm in the Palestinian territories, and to take the necessary measures to create the horizon needed to achieve just and comprehensive peace, on the basis of the two-state solution,” the royal court said in a statement.

Jordanian Foreign Minister Ayman Safadi was also in attendance. On the Israeli side, defense officials including Gantz' Chief of Staff Maayan Israeli attended the meeting.

Abdullah and Gantz last met secretly in February, the Israeli press reported. Israeli Prime Minister Naftali Bennett, who “pledged to fix the relationship” with Jordan, also met secretly with the king in July.