After months of secret negotiations, mediated by the United Arab Emirates and with the assistance of US Climate Envoy John Kerry, Israel and Jordan will sign an agreement next week in Dubai that should help them both to face climate change challenges. 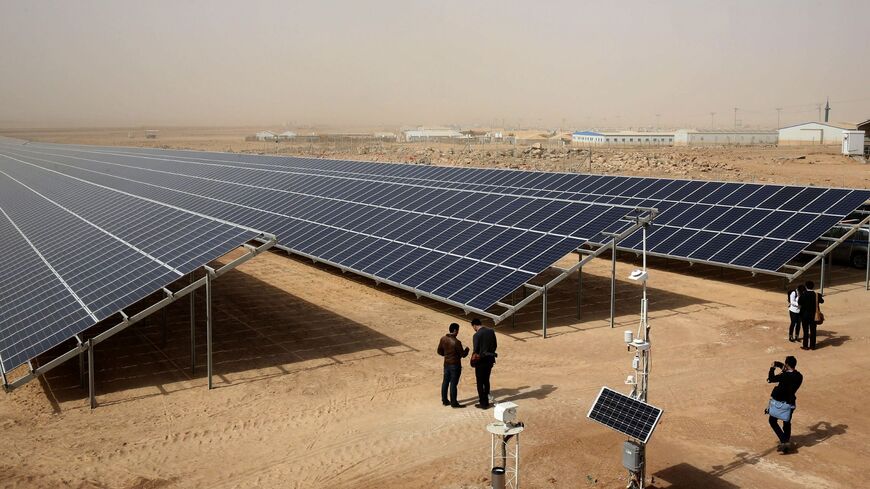 A 12.9 megawatt solar plant, funded by the German government, is inaugurated at the Zaatari refugee camp in Jordan on Nov. 13, 2017. - KHALIL MAZRAAWI/AFP via Getty Images

Israel, Jordan and the Emirates will soon sign an agreement on green energy and water, with the countries helping each other on climate challenges. The deal is slated to be signed in Dubai next week after months-long secret negotiations between the three countries. US Climate Envoy John Kerry, Israeli Energy Minister Karine Elharrar, Jordanian Water Minister Mohammed Al-Najjar, Emirati special envoy on climate change Sultan Ahmed Al Jaber and Israeli National Security Adviser Eyal Hulata are expected to participate at the signing ceremony.

The deal was reportedly first proposed in meetings three months ago between Elharrar and Emirati Ambassador to Israel Mohamed Al Khaja. It could have been signed at the Glasgow COP26 climate summit, but Prime Minister Naftali Bennett reportedly preferred to wait until after the Nov. 4 vote at the Knesset over the budget. Reportedly, Kerry has been also involved in promoting the deal, raising the issue on multiple occasions with both Foreign Minister Yair Lapid and Jordanian King Abdullah.

The cooperation agreement will see the construction of a solar plant in the Jordanian desert, generating clean power for Israel, in exchange for a desalination plant in Israel that will provide Jordan with water. Jordan is suffering from years-long drought. Environmental Protection Minister Tamar Zandberg tweeted today that the deal “will enable moving towards renewable energies, moving towards meeting climate goals and contributing to regional cooperation.”

Zandberg also paid tribute to the EcoPeace Middle East NGO, which brings together Jordanian, Palestinian, and Israeli environmentalists. The group has been advocating for years for such a deal. “Offering my respect and gratitude to EcoPeace, who conceived the idea years ago, and were involved in its implementation and fulfillment, including activists who labored with tireless optimism and force for the benefit of the environment, our region, and the connection between them,” she tweeted.

The deal is expected to contribute to better relations between Israel and Jordan. Ties between the two countries were cold during the Netanyahu era, but the new government had made it a priority to reach out. Shortly after taking office, Bennett met in Amman with the Jordanian monarch, offering to double the amount of water Israel supplies to the Hashemite kingdom. That deal was sealed Oct. 12, when Elharar and Al-Najjar signed the agreement in Jordan. Lapid and Defense Minister Benny Gantz have also met with Jordanian officials in recent months, expressing Israel’s desire to tighten cooperation in security and civilian domains.