Israel, Jordan and the United Arab Emirates have inked a memorandum of understanding to speed progress on a deal to exchange solar energy for desalinated water. 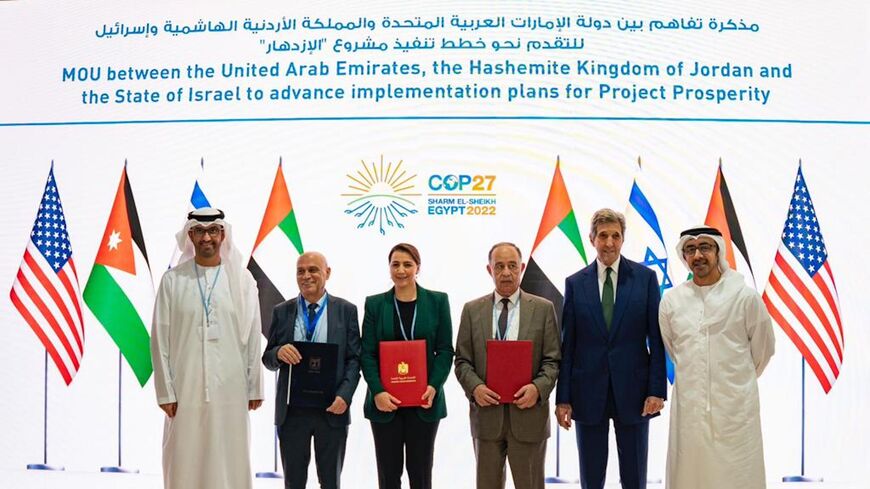 Representatives from Israel, Jordan and the United Arab Emirates pose with US climate envoy John Kerry after signing an agreement on advancing a deal on green energy and desalinated water at the COP27 summit in Sharm al-Sheikh Egypt, Nov. 8, 2022. - Bradley D'coutho

Israel, Jordan and the United Arab Emirates signed a memorandum of understanding today in Sharm al-Sheikh, Egypt, to accelerate the implementation of a cooperation deal on a water project in exchange for clean electricity signed in Jordan a year ago known as the Prosperity projects.

In the 2021 agreement, Jordan committed to creating a solar facility funded and managed by the Emiratis and providing some of its output to Israel, and Israel committed to providing Jordan with 200 million cubic meters of water a year from its new desalination plant.

The project has been criticized both in the Emirates and in Israel for advancing too slowly because of bureaucratic hurdles. The MOU is designed to reduce these obstacles.

Today’s MOU was signed on the sidelines of the COP27 climate conference. Israel was represented by Regional Cooperation Minister Esawi Frej, the Jordanian side by Water Minister Mohammad Al Najjar and the Emirates by the Minister of the Environment Mariam Al Mheiri. The ceremony was attended by US President Joe Biden’s climate envoy John Kerry.

In the memorandum, the sides committed to accelerating the process of implementing both parts of the project. The memorandum states that Israel and Jordan commit to finding solutions for all the ​unresolved issues as well as furthering the work of the joint committees ​tasked with supervising and administer​ing the joint projects. ​The committees are expected to present their progress in a year at the COP28 conference in the United Arab Emirates.

Frej told Al-Monitor, “Today we leave the next government a legacy of regional cooperation that crosses borders and creates hope for the whole region. This can happen only when nations join together to advance an optimal use of natural resources. This legacy that we will leave will prove the power of peace.”

Israeli Energy Minister Karine Elharrar stated, “The signing of the Prosperity agreement was the turning of a new leaf in relations between Israel and Jordan. Our tireless work since then to implement the project has built more trust in the relationship between the nations, in the understanding that common action against the impacts of the climate crisis will benefit the citizens of the region and holds geopolitical, economic and environmental opportunities. I sincerely hope that the government taking shape will adopt the project I led and won’t let any obstacle hinder its implementation, because this is a project that is good for all sides and that crosses political divides.”

Will the memorandum of understanding be binding for the incoming government? In principle, any side can cancel the agreement at this stage, but since the Abraham Accords are one of incoming Prime Minister Benjamin Netanyahu’s biggest achievements, he's likely to continue with the project, as the 2021 agreement and today’s MOU promises to bolster Israel’s relations with the Emirates and improve relations with Jordan.

Addressing the Israeli press, director of the Israeli Ministry of Energy Lior Shilat rejected criticism over the slow implementation of last year’s agreement. He said that Israel has met the schedule set by the initial agreement. According to him, in a year the sides will be able to reach a more complete agreement including a schedule for completing the entire project.