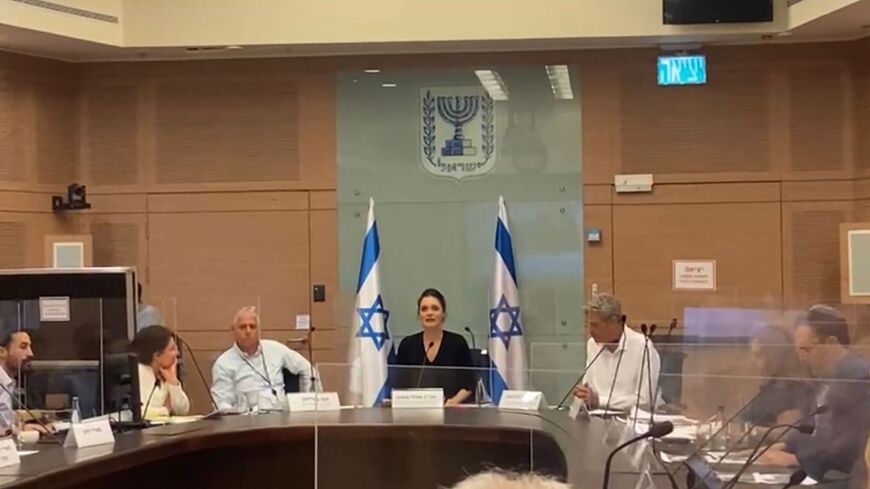 Knesset member Emilie Moatti chairs a meeting of the Knesset subcommittee for Foreign Policy and Public Diplomacy in the Israeli Knesset, Jerusalem, May 10, 2022. - Israeli Knesset

Labor Knesset member Emilie Moatti and Regional development Minister Esawi Frej have been advancing climate issues and related business opportunities for and with the Palestinians. On May 10, Israel’s Regional Cooperation Minister Esawi Frej participated in the spring session of the international donor coordination group in support of the Palestinian economy. While Frej was in Brussels exploring diplomatic and economic cooperation, Labor Knesset member Emilie Moatti convened the subcommittee for Foreign Policy and Public Diplomacy she chairs to explore Israeli-Palestinian cooperation on the environment and climate change.

When Moatti convened a first general meeting on Israeli-Palestinian cooperation on Feb. 15, she promised to hold five sessions on specific fields of cooperation. The next session was held May 10 to address Israeli and Palestinian civil cooperation over climate change, agriculture and environmental protection. A session on education is forthcoming.

Opening the session, Moatti stated, "All the debate's participants — committee members, representatives of government ministries, representatives of civil society organizations and academic institutions — agreed that in issues related to environment, climate and agriculture, in which Israel and the Palestinian Authority are effectively a single unit and borders have no meaning, there is potential and a shared interest in collaboration regardless of the geopolitical reality."

The session focused on existing projects and on suggestions for future cooperation. Adam Schalimtzek, who coordinates international relations at the Ministry of Environment, presented a long list of actions already undertaken by the ministry. He noted that Minister for Environmental Protection Tamar Zandberg had met with her Palestinian counterpart in July 2021, shortly after taking office, and that the ministry was committed to expanding cooperation with Ramallah. He said Zandberg would like to establish a working team on the environment with the Palestinians.

One central domain of joint activity, said Schalimtzek, is waste management in the West Bank, including the storage and transportation of waste and the management of fire risks, handling agricultural waste and advancing a new waste management facility. Another important area of cooperation is the management of sewage and other wastewater in the West Bank, including cleaning rivers and controlling the proliferation of mosquitos. Schalimtzek noted that the Israeli authorities facilitate the importation to Gaza of materials need in this domain, in accordance with Gaza authorities’ requests.

Samir Mawadi, agriculture coordinator for the West Bank in Israel’s Civil Administration, said, “In the agricultural field, there is full cooperation with the Palestinians, regardless of the diplomatic situation. The agriculture sector employs 15% of the Palestinian workforce and constitutes over 4% of their GDP. A total of 65% of Palestinian agricultural produce is marketed in Israel, so the two markets depend on each other. We have a pineapple-growing project with them, an effort to develop fish ponds and a biological pesticides project, and we are also training them together with the Ministry of Foreign Affairs' Mashav unit."

Mashav is Israel's Agency for International Development Cooperation is part of the Foreign Ministry. Part of its operations involve training courses, usually for people from developing countries, in fields such as education, smart agriculture, water ​management and institution building. The Foreign Ministry declined Al-Monitor’s request for more details on the involvement of Palestinians in these programs.

Moatti told Al-Monitor that with the escalating security tensions and on the backdrop of recent terror attacks, she hesitated on last week's session, wondering if the timing was right, but concluded that cooperation between civil societies is the most important way to strengthen the Palestinian Authority and advance hopes for peace. "Avian influenza, coronavirus, river pollution do not recognize human borders, which is why it is so important that we and the Palestinians cooperate,’’ said Moatti, adding that the issue of water desalination is also a major domain in which Israel could contribute to bettering the lives of Palestinians.

Water management is a major topic in discussions between Israelis and Palestinians as well as in trilateral forums with the Jordanians.  The nongovernmental organization EcoPeace Middle East was invited to the May 10 Knesset meeting on water projects because it actively promotes regional and local cooperation for protecting the environment. Its representative Sharon Bengio, who participated, explained to Al-Monitor that she presented several of the organization's recent projects on water and energy.

EcoPeace's list of projects contains the November 2021 "water for energy" deal signed between Jerusalem and Jordan. In the framework of this agreement, an Emirati company will build a plant in Jordan from which Israel will buy electricity in exchange for an Israeli desalination plant sending water to Jordan. EcoPeace would like to see this agreement expanded to include the Palestinians. The West Bank needs more electricity, as does the Gaza Strip, where there is a serious water shortage. Solar energy could be used to operate a desalination plant in the Strip.

Another project advanced by EcoPeace is working together with the Palestinian Authority, so it becomes autonomous in sewage treatment. EcoPeace is promoting projects that focus on building new Palestinian wastewater treatment facilities and on improving existing ones, and for solving the sewage problem in the source. EcoPeace is also working to advance a trilateral project between Israel, Jordan and the Palestinians to clean up the Jordan River.

Bengio explains that the Jordan River is constantly polluted with sewage and other contaminants. A few years ago, the World Bank had agreed to financially support several projects to clean it. These projects were not realized for a variety of political reasons, and EcoPeace now hopes to revive them. A clean Jordan River would offer clean water to Israeli, Jordanian and Palestinian farmers as well as allow the river's plants and animals a chance to recover.