Emilie Moatti, head of the Knesset's subcommittee on foreign affairs, is busily planning meetings on advancing cooperation between Israelis and Palestinians. 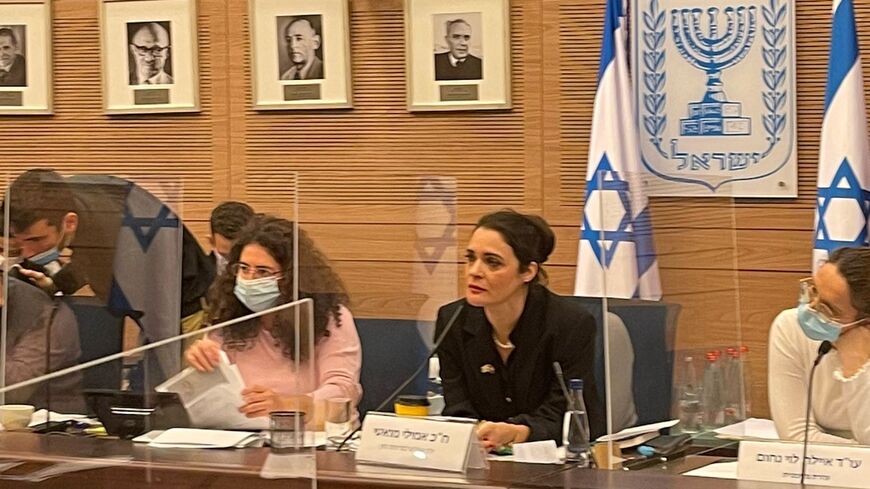 Chair of the Knesset Subcommittee on Foreign Affairs Emilie Moatti leads a debate on civil initiatives for cooperation between Israelis and Palestinians in the Knesset, Jerusalem, Feb. 16, 2022. - Hagit Klaiman/Knesset

Head of the Knesset subcommittee on foreign affairs Emilie Moatti convened a meeting Feb. 15 on civil initiatives for advancing cooperation between Israelis and Palestinians. She said, "Today is the first of a series of meetings I am planning throughout the year to examine our relations with the Palestinians. What the left and the right within the current coalition have in common is the unwillingness to cause suffering to the Palestinian people."

Moatti added that in the coming weeks, she intends to convene meetings on Israeli-Palestinian relations in the domains of sustainability, textiles, technology and agriculture, with the goals of promoting cooperation and of defining obstacles that need to be removed. She has already planned a meeting on Israeli-Palestinian cooperation over climate change in three weeks’ time. She explained to Al-Monitor that she is committed to convene as many meetings on working with the Palestinian leadership as on "traditional" foreign affairs issues.

Moatti invited several civil servants, public figures and activists engaged in projects supporting the Palestinian economy. Participants were invited to present existing projects and asked to evaluate the usefulness of the ventures, how they impact Palestinian and Israeli lives and what lessons can be learned from their success or failure.

The first to speak was Yael Patir, senior diplomatic adviser to the minister for regional cooperation, who explained that from the moment Issawi Freij was appointed minister, he has made advancing Israeli-Palestinian economic relations a priority.

Patir said, "Minister Freij had identified the Joint Economic Committee, which was established following the Paris Protocol agreement between the Israelis and the Palestinians, as the appropriate and efficient platform for advancing cooperation issue, but the committee in fact had not been convened since 2009. It is our priority now to convene this forum in order to create an ongoing dialogue between the sides and resolve economic/administrative red tape that stands in the way of entrepreneurs. … We are talking about ad hoc solutions in everything but strictly financial issues, which are handled by the Finance Ministry. This is why this committee is so important."

She explained that the failing Palestinian economy risks deteriorating even further, saying, "It’s an emergency situation. We need to address issues such as export red tape, money transfers, price hikes and salary payments for Palestinian workers."

An important issue that both Patir and other participants referred to was the recruitment of Palestinian tech workers by Israeli companies. A few weeks ago, Israel issued some 500 work permits for Palestinians in high-tech professions, a first in Israel. The pilot program could be expanded in the future.

Tech entrepreneur Eyal Waldman, who is behind two unicorn companies, told the committee about his personal experience. "My companies employ people in 21 countries across the globe. In Israel, we always made a point of also hiring Arabs, Druze, etc. And for me personally it was also very important to engage in the Palestinian Authority. We were actually the first company ever to open a development center at the new Palestinian town Rawabi. Later, we expanded to Hebron and Nablus. Five-six years ago, I decided we needed to expend to Gaza as well. People advised us against it, but we went ahead anyway." Waldman said that he encouraged several other companies to open branches in Rawabi. All in all, his company and the other companies now employ about 1,000 people in the town.

Senior research fellow at INSS, former peace negotiator and former Chief of Staff for Prime Minister Ehud Barak Gilead Sher suggested that Israel establish what he called a "Peace Authority." Moatti took up the proposal immediately to the letter, as formulated by Sher, and is already pushing for such an entity. The bill she presented explains that the role of this new authority would be to closely and actively monitor any diplomatic or security processes and initiatives designed to promote and achieve peace and prosperity, to report to the Knesset and the government on such development and, host debates and make recommendations.

The idea is to appoint a commissioner that will head the new authority for a period of six years. This person's mission would include proposing to the government alternative courses of action for the purpose of achieving, preserving and promoting peace and prosperity. The commissioner would address the public, including businesspeople, and organize cooperation and economic activities, in coordination with government ministries and foreign governments, particularly in the Middle East and the Arab world, and with the Palestinian Authority.

Moatti must be aware of the fact that the current government under Prime Minister Naftali Bennett will not promote a diplomatic process with the Palestinians. Foreign Minister Yair Lapid has conceded as much on more than one occasion. Still, as is evident in the meetings between government ministers and their Palestinian counterparts in recent months, the government is keen to support the Palestinian economy and establish some sort of a dialogue with the leadership in Ramallah.

According to the rotation agreement, Lapid will take over premiership in August 2023. Moatti intends to wrap up her planned series of meetings by then, formulate recommendations to the government and present to Lapid a comprehensive diplomatic plan, as things could look different once he is at the helm.