In an interview with Al-Monitor, attorney Dov Weissglass deplores the ongoing Israeli refusal to connect the Palestinian town Rawabi to the water network, claiming that the refusal by Ministers Moshe Ya'alon and Silvan Shalom is politically motivated. 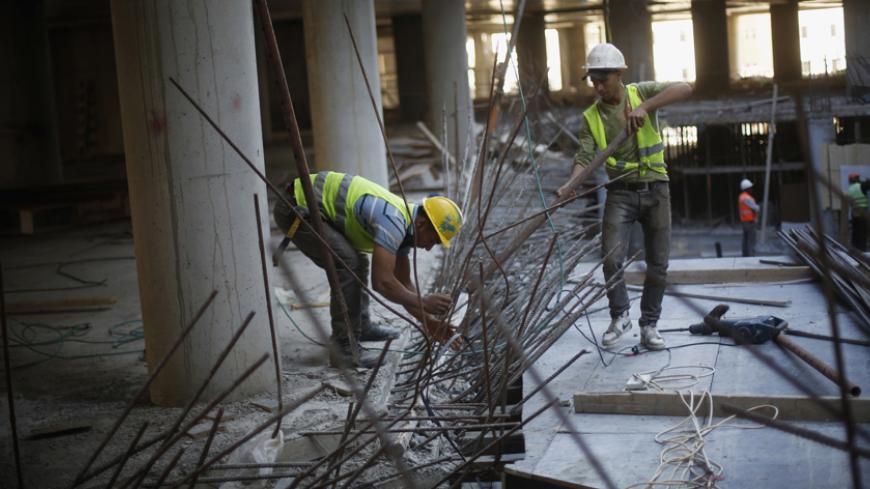 Palestinian laborers work on a construction site in the new Palestinian town dubbed Rawabi or "The Hills," near the West Bank city of Ramallah, Oct. 27, 2013. - REUTERS/Mohamad Torokman

After nearly a year of foot-dragging, Coordinator of Government Activities in the Territories Maj. Gen. Yoav (Poli) Mordechai finally approved two weeks ago the connection of the new West Bank Palestinian city of Rawabi to the water supply system. For a moment, the entrepreneur behind the project, Palestinian-American billionaire Bashar al-Masri, who is a member of a wealthy Nablus family, was tempted to believe that the project of his life was saved from collapse. Masri invested practically his entire fortune in the new Palestinian city, and for a while, it looked like the threat of bankruptcy looming over the entrepreneur who sought to do good to his people had passed.

It turns out that the joy of Masri and the hundreds of Rawabi homebuyers was premature. While Mordechai approved the connection of the city to the national water supply system, his approval has been subsequently foiled by another Israeli knock-back that sealed off the taps even before they were opened. Minister of National Infrastructures, Energy and Water Resources Silvan Shalom decided, by virtue of his capacity as the official in charge of the water sector in Israel, to halt the connection of Rawabi to the water supply system pending the convening of the Israeli-Palestinian Joint Water Committee (JWC), which has not met for five years.

The JWC is the intricate story of Israelis and Palestinians, who in recent years, especially since the establishment of a right-wing government in Israel, have failed to reach any agreement, regardless of the suffering their failure inflicts on the general public.

The committee was established under the Oslo Accord in 1995. It was designed to create a mechanism for cooperation and understandings with regard to the distribution of water resources in the West Bank between the areas under control of the Palestinian Authority and the Israeli settlements. Each side in the JWC was given veto power. However, in view of the ongoing expansion of settlements in the West Bank and the establishment of new settlements, in the last five years, the Palestinians, unwilling to promote the construction boom, refuse to vote on the supply of water to the settlements.

Needless to say, the failure of the JWC to convene has not prevented a regular water supply to the settlements, or even to the illegal outposts in Judea and Samaria. Under the shadow of the political and diplomatic divisions between Israelis and Palestinians, which have deepened in recent years, and in the absence of meetings of the joint committee, the Civil Administration there had no choice but to improvise and find creative solutions to enable regular water supply to small-size Palestinian building projects. After all, water is a basic commodity, essential to human survival.

Then came the moment of truth. The Civil Administration in Judea and Samaria was asked to connect Rawabi, which is expected to be populated in the first stage by 25,000 inhabitants, to the national water supply system. The location of Rawabi, 13 kilometers (8 miles) north of Ramallah, was selected from three sites proposed by the Civil Administration when Ehud Barak was defense minister. Construction of large parts of the city has already been completed, and in fact, in May 2014, the project management was supposed to hand over the keys to the first 800 homebuyers. Yet, the Palestinians and Israelis persisted in the fruitless debate — quibbling over the question of who is the major culprit responsible for violating the understandings reached under the Oslo Accord. Meanwhile, the city looks like a ghost town, which the workers in the project find most difficult to maintain.

Two weeks ago, Mordechai decided to connect Rawabi to the water supply system, in coordination with Defense Minister Moshe (Bogie) Ya'alon. At the same time, to compensate for the failure of the JWC to convene, the settlement umbrella organization Yesha Council was promised that a number of water projects would be approved on behalf of the settlements. Nevertheless, the Rawabi water saga is not over yet. As noted, Shalom declared that as long as the JWC failed to convene, water would not flow to Rawabi.

Thus, with the ball in Shalom's court, the Civil Administration cannot possibly bypass the political level. Indeed, under the circumstances, no improvisation, creativity, fire-fighting or proposed compromises to settle the disagreements are effective here. In response to Al-Monitor’s inquiry, the spokeswoman of the Coordinator of Government Activities in the Territories (COGAT) issued a statement making it clear that COGAT could do nothing about it: “Given the delay in the operation of the Joint Water Committee, Coordinator of Government Activities in the Territories Maj. Gen. Yoav (Poli) Mordechai has decided to approve a number of mature projects that are ready for implementation, and are only waiting for the green light, which would serve populations in the West Bank.”

Although, for obvious reasons, the message is carefully worded, in a laconic style, the meaning of COGAT's statement seems quite clear: As all efforts have failed, and since a large Palestinian population is under discussion here, COGAT has decided to put an end to the obstructions, the "games of honor" and the endless bureaucracy, and to make it easier for the population of Judea and Samaria. The problem, however, as aforesaid, is that COGAT and the minister in charge do not see eye to eye on the issue.

Attorney Dov Weissglass, the former bureau chief for late Prime Minister Ariel Sharon, who is currently representing business magnate Bashar al-Masri, told Al-Monitor that if the Rawabi project — in which hundreds of millions of dollars had been invested — collapsed, a suit for damages on behalf of the entrepreneur would be brought against the State of Israel in the United States, where Masri is a citizen. "Two weeks ago, Maj. Gen. Yoav (Poli) Mordechai sent a letter to the Ministry of National Infrastructures, Energy and Water Resources, asking to connect Rawabi to the water supply system; however, the minister is not going to do anything about it," he said.

Al-Monitor:  Do you think the Israeli conduct in the affair is politically motivated?

Al-Monitor:  Is this great venture bound to collapse in case Silvan Shalom fails to approve the connection of the city to the water supply system?

Weissglass:  Without a question! In the coming days, 500 workers are going to be laid off. We are considering an appeal to the Supreme Court. It is going to take long months, at best. If the project collapses, it will be a suit for damages of an astronomical scope.

Al-Monitor:  Let me ask you — not as a lawyer representing Masri but rather as a former bureau chief for late Prime Minister Ariel Sharon — can you understand the considerations [behind it]?

Weissglass:  As far as the Palestinian issue is concerned, there are no [real] considerations, aside from what the Likud Central Committee members, and especially the settlers among them, may think. It is feared that any move that would be to the benefit of the Palestinians might be frowned upon by the Central Committee members. No wonder, then, that [Defense Minister] Moshe Ya'alon has been dragging his feet on the matter for a year now; but then came Poli Mordechai and pressed him [to move ahead with it]; and now you have Silvan Shalom, who is going to do everything he possibly can to stall it.

Following a request for a reaction on this issue, Al-Monitor received a statement from the Ministry of National Infrastructures, Energy and Water Resources:

"Under the interim agreements between Israel and the Palestinians (1995), a Joint Water Committee (JWC) was to be established, in the framework of which the two sides were to mutually approve water and sewage projects in the Jewish settlements and Palestinian communities. Unfortunately, since 2010, the Palestinians have refused to convene the committee and approve projects (approved in the past as a matter of routine), and this, for political reasons.

"Minister Shalom and the Water Authority believe that unilateral approval, without convening the committee, as proposed and advocated by a number of officials in Israel, would drop the basis for the regulation of the continued operation of the Joint Water Committee. Moreover, in the wider diplomatic context, the proposal is liable to bring about the complete dismantling of the Israeli-Palestinian water agreement, and undermine the Israeli water economy. At the same time, it might damage the cooperation with the professional echelons — the [very] cooperation that at present helps to safeguard our water resources and prevents damage to the aquifers. We will be happy if the Palestinians change their minds and show up for the committee meeting convened to discuss the projects on both sides."