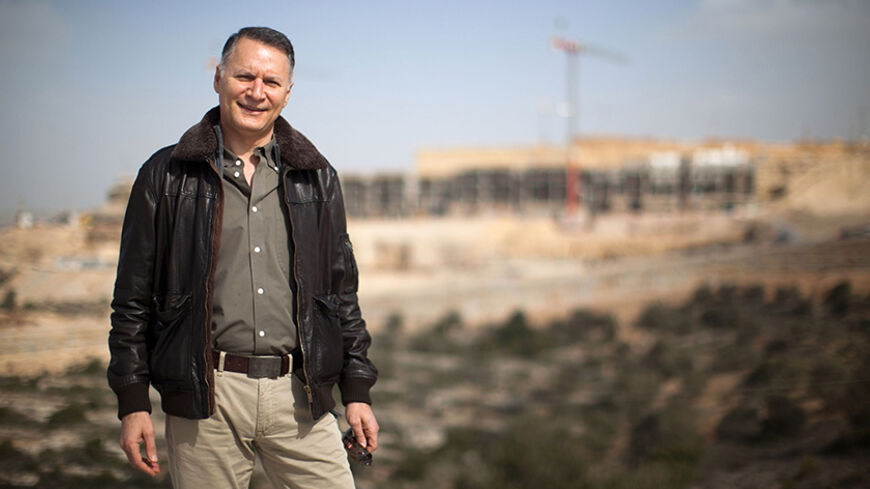 RABAWI, West Bank — “I have two daughters, and Rawabi is the third,” says Palestinian entrepreneur Bashar al-Masri as he climbs the stairs to a sample apartment in a residential project in the city of Rawabi. Located on the second floor, it is a 182-square-meter (1,959-square-foot) unit that costs $110,000. Apartments in nearby Ramallah cost 20-30% more. In East Jerusalem, they are twice as expensive. In Tel Aviv, an apartment like this would cost 10 times as much or more. Still, Masri is building at the same rapid pace that he uses to skip from floor to floor. As of today, 650 units have been sold, and there are still plenty of opportunities.

Masri looks out at the landscape from the balcony. There, on the horizon, to the northwest of the apartment, he points out to the Hadera power station. To the southwest, he can see the port in Ashdod. On a clear day, the skyscrapers of Tel Aviv are visible. “We’re right in the middle,” Masri exclaims proudly. ''Nablus is just 25 km (15.5 miles) away. So is Jerusalem. Tel Aviv is 40 km; Amman is 70 km.''

In many ways, Masri is making history. The project that I visited Feb. 13, initiated in Area A just north of Ramallah in the heart of the West Bank, is the first Palestinian city to be planned from inception. Originally, Masri's model was the Israeli city of Modi’in, which was also planned down to the smallest detail. “We learned a lot from Modi’in, and we continue to visit there,” he says. “The most important thing that we took from them is the importance of creating places to work. We are also learning from the people purchasing apartments. They have demands.”

Masri is the founder and owner of Massar International, a holding company that specializes in real estate, finance and agriculture. He is the spirit behind Rawabi — which means hills in Arabic. In the first stage, 6,000 housing units are being constructed for 25,000 people. The first families are scheduled to move in over the course of 2014. Masri shares his investment in Rawabi with the Qatari investment firm Diar, which also has a stake in construction in Great Britain, Yemen and Tajikistan. Massar (“Path”), is considered to be the largest private employer in the West Bank.

To complete the picture, the entrepreneurs hired attorney Dov Weissglass to serve as a special consultant, especially in their dealings with the Israeli authorities. There was no better choice than the man who served as bureau chief for late Prime Minister Ariel Sharon. “When there is occupation and Israel is the occupier, we depend a lot on Israel,” Masri explains. “When I started here, people told me that I was dreaming and that I’m crazy,” he continues, “and in fact, there are countless risks here. All it takes is two soldiers to block the road leading to the city for a week.”

Amir Dejani, deputy CEO of the project to establish Rawabi, says that two issues pertaining to Israel have delayed the first families from moving into the new city. “We want to expand the main access road, which crosses through Area C and is under Israeli control. But the bigger problem is water. We haven’t received a drop until now.”

Masri is a member of one of the most prominent Palestinian families. He was born and raised in Nablus, where his father was a surgeon. He began participating in demonstrations against Israel when he was 14. He left for the United States before he turned 18, but after being arrested on eight separate occasions. He studied chemical engineering, married an American and obtained US citizenship. He also lived and worked briefly in Great Britain and then in Saudi Arabia, but he built his fortune with his own hands, in real estate deals in Morocco, Libya, Jordan and Egypt. “The money invested in Rawabi,” he reveals, “was reaped in Casablanca, Marrakesh and Tangier. We sold an average apartment there for $45,000."

The entrepreneurs behind Rawabi are not only building the homes there. They are also creating the town’s public spaces, including schools, playgrounds, commercial areas, a country club, a movie theater, a hotel, a technological park and a ranch for horses, as well as two mosques and a church. A 15,000-seat amphitheater is currently being constructed. Electrical and communication cables are hidden underground. A water purification system manufactured in Israel will recycle water used in the local homes for irrigation. And the planners have not forgotten their branding either. There are signs in every corner of this little city, all in the same meticulously designed style. Even trucks at the construction site bear the specially designed name, “Rawabi.”

The entrepreneurs insist that the entire workforce is local. The stone is produced locally, at a nearby quarry. The project employs 300 Palestinian engineers and building inspectors, including about 100 women. “Whatever we don’t have, we buy elsewhere,” says Masri. “For example, there is no sand or cement in Palestine, so we buy them from a Palestinian agent, who imports them from Israel. Many Israeli suppliers are helping with the project. The only people we won’t buy from are the settlers. The Israeli economy makes a lot of money out of Rawabi. The project is in full accord with Prime Minister Benjamin Netanyahu’s vision of economic peace, but we are not doing it for him.”

Using the personal data of the many people who have already bought apartments there, it is possible to put together a profile of the emerging city’s population: 70% of the future inhabitants are married or engaged couples, and 90% have an academic degree. Urbanites and villagers are equally represented. Rawabi will be a young, well-educated city, with lots of children — the capital of the Palestinian middle class. Only 11% of the people who bought apartments in Rawabi are single, and most of these are women.

“We don’t discriminate between Jews, Christians or Muslims,” says Masri, but the reality is quite different. Any Israeli or foreign resident who wants to purchase an apartment in the city needs special approval from the Palestinian Authority, regardless of whether he is Jewish or Arab. No Jew has yet shown up in the polished sales office established at the site, but a handful of Israeli Arabs have bought apartments there. “They tell us, 'We’re proud to see the Palestinians building something modern. Israelis aren’t the only people who can do that.'”

Masri’s two daughters study in the United States: one in Boston, and the other in Atlanta. He and his wife live in Ramallah, but they will soon be moving to Rawabi. “The Palestinian state will be established. It’s just a matter of time,” he says. “The question is only when and what kind of state it will be. Will it be like those countries in Africa that subsist off donations and aid, or will we be a progressive state, home to corporations that are traded on the Nasdaq? Our preference is obvious, which is why Massar is investing in Palestine.”