The Palestinian city of Rawabi, which combines modernity with Palestinian heritage, hopes to attract tourists from around the world. 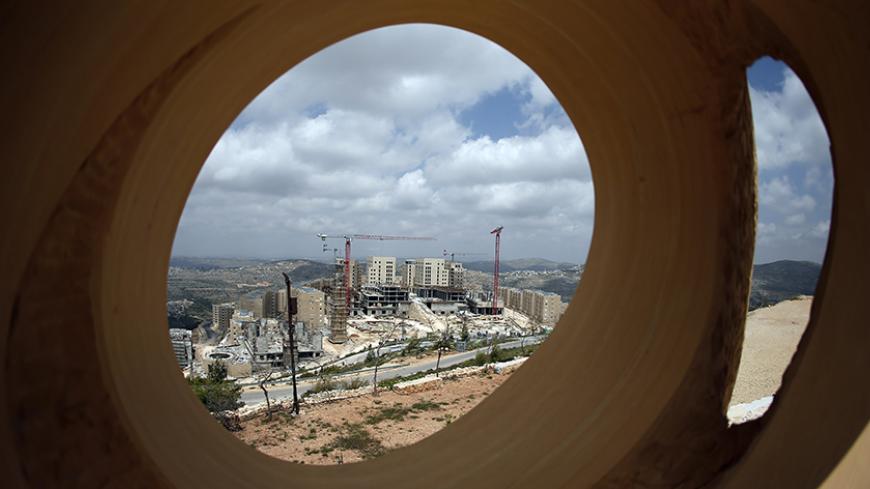 A picture shows part of the new Palestinian city of Rawabi as seen through a sculpture, at the construction site of the new city just north of Ramallah in the West Bank, April 22, 2015. - THOMAS COEX/AFP/Getty Images

RAMALLAH, West Bank — A large Palestinian flag flies over Rawabi, the city in the West Bank that symbolizes Palestinian dreams of a haven that combines high living standards with the latest architectural design. Between Jerusalem and Nablus, to the north of Ramallah in the West Bank, the model city stretches over approximately 6.3 square kilometers (2.4 square miles).

“The city is following the standards of urban planning as well as the latest architecture and modern construction standards,” Majid Abdul Fattah, the head of the Rawabi municipality, told Al-Monitor, “With the joint efforts of the Bayti Real Estate Investment Company and the Qatari Diar Real Estate Investment Company, the drilling and construction operations have been ongoing since 2010 with the aim of achieving a series of residential neighborhoods.”

But it has not always been easy for the city, whose construction workers were attacked with stones by the residents of the nearby Israeli settlement of Ateret, which lies on a hill close to Rawabi. They wanted to hinder the establishment of the Palestinian city thinking that its economic prosperity would prompt the Palestinians to hold onto this land. They also thought that the city would be a source of pollution and lead to traffic in the future. The relationship between the two settlements is illustrated in a statue of Nabil Anani, one of the founders of the Palestinian contemporary art movement. The statue shows a Palestinian family in their traditional clothes clasping their hands around a Palestinian flag and standing with their backs to Ateret and their faces to the city of Rawabi, which they believe is their future.

“The city consists of 23 residential neighborhoods comprising of more than 5,000 housing units. It will be inhabited by more than 40,000 people once the construction phases are completed and will thus become the largest Palestinian investment project to provide apartments at affordable prices for all segments of Palestinian society. It also provides job opportunities for hundreds of people who have found in this city an opportunity to achieve their hopes and aspirations,” Fattah said.

He maintained that Rawabi established a link between the present and the ancient heritage of the old Palestinian cities: The districts have been given old Canaanite names such as Sawan, meaning stone, and Makmatah, Dulaim, Waruar, Ikshaf and Tarsa.

“The sidewalks and corridors of the city are paved with stones and bright-colored tiles with distinctive ironworks that are inspired by the past. The windows and building entrances are similar to the ancient Palestinian arches, which strengthen the ancient look of the place,” Fattah added.

“We hope that Rawabi will serve as the birthplace of a new generation whose dreams will come true. There should be a geographical connection between the city of Rawabi and all of the Palestinian cities and villages to limit any settlement expansion in this region,” Fattah said, adding that the city had already hosted many key figures, including former UN Secretary-General Ban Ki-moon.

Rawabi had previously been criticized for contracting Israeli companies for the supply of construction materials. Bashar al-Masri, the chief executive officer of Bayti Real Estate Investment Company, told Al-Monitor, “Palestinian companies are given priority, and more than 100 contracts have been signed with Palestinian companies, while no more than 12 Israeli companies might be contracted for the supply of raw materials and essential services that are not available in the Palestinian market and are difficult to import, such as cement and sand. This has been the case with all of the other Palestinian investors.” He stressed that the Palestinian law allows cooperation with foreign companies, including Israeli ones.

Mohammed Abu Jaish, a researcher in the fields of tourism and archaeology, told Al-Monitor, “The city of Rawabi is very popular among citizens in various parts of the West Bank, and it is frequented by local and foreign tourists who seek to get a close look at its entertainment and cultural facilities, which combine modernity with the authenticity of ancient Palestinian history.”

He pointed out that tourism plays an important role in achieving economic and social development in any country, as it is an important source of hard currency and it creates job opportunities. “People like to travel and visit tourist sites around the world. Statistics show that nearly 75% of foreign visitors who visit Israel go to tourist attractions in the West Bank, including the city of Rawabi,” he added.

Ahmad Saleh, a resident of Rawabi, told Al-Monitor, “My family and I are thrilled to finally realize our dream of being one of the residents of this wonderful and modern city and enjoy its high-end lifestyle and unique buildings that remind us of our past and heritage.”

He added, “Rawabi is one of the most beautiful cities in the world. You can walk around safely, enjoy its purity and breathe an air that is devoid of harmful exhaust emissions, and this positively affects the city and its inhabitants.”

Abu Jaish warned that Israel's actions and settlements would affect investment and tourism in Palestine and will lead a large number of local and foreign tourists to refrain from visiting tourist sites. “There are also the restrictions imposed on tourists and investors upon entering the West Bank; these foreshadow total paralysis in the incoming tourism activity,” Abu Jaish said.