The collapse of an old building in downtown Cairo has shed light on the state of historic buildings in the area, while heritage preservation is the focus of various projects. 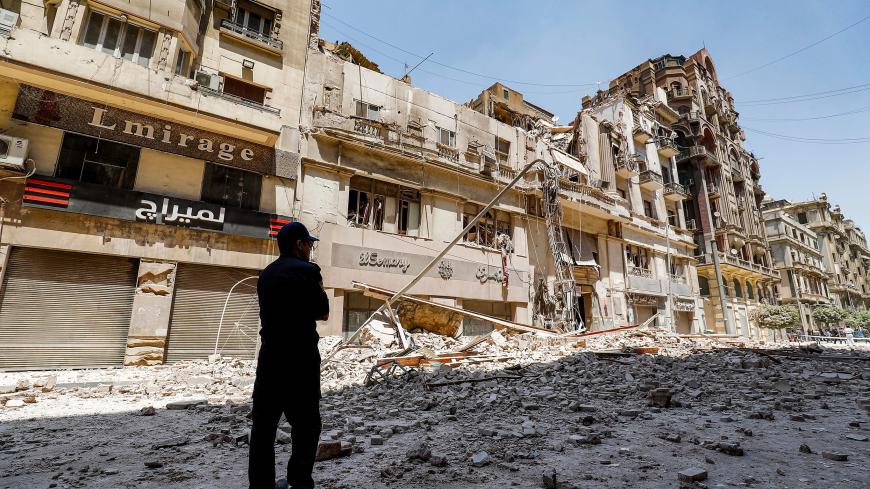 A policeman stands by the rubble at the scene of a building collapse along Qasr el-Nile street in the Egyptian capital Cairo's downtown district, August 15, 2020. - KHALED DESOUKI/AFP via Getty Images

An old building in Qasr el-Nile Street, one of the main arteries that runs through downtown Cairo, the urban center of Egypt’s capital, partially collapsed Aug. 15, injuring four people. The building was not an ordinary one.

According to an Aug. 16 statement by the public prosecution, the four-story building, which housed two residential units and several stores, was built in 1941 and registered as a building of special architectural style. The prosecution noted that there had been several orders to restore the listed building in the past, the last of which dated to 1993, but all these orders had been ignored.

The collapse of the listed building was the latest in a chain of a wider and recurring phenomenon — the traditional leniency of the authorities when it comes to enforcing laws and regulations on construction and maintenance, coupled with the illegal action of some owners and real estate developers, have made these types of incidents frequent, and has recently become an important concern for the Egyptian government. In regard to historic buildings, the state of negligence does not help.

Downtown Cairo has long been a glaring example of this process. Developed between the late 19th century and the mid-20th century, the new heart of the Egyptian capital, located in an area that extends from the Old City to the Nile River, has a distinctive architectural style that combines European styles with local influences and materials.

The quarter, also known as Khedivial Cairo, underwent a deep transformation during its early years, when most of its original buildings that included houses and villas faded within decades, giving way to a second wave of construction during the first half of the 20th century that better defines the area nowadays.

The turning point for Khedivial Cairo came with the 1952 coup that brought the military to power. The wave of nationalizations pushed by Gamal Abdel Nasser led to a government acquisition of more than half of the buildings in downtown Cairo. A new strict rent control system and ownership model were also instituted. Little by little, the upper and middle classes that had inhabited the neighborhood started to move out.

Following the open-door policy adopted by Anwar Sadat in the 1970s, local businesses were turned into shops selling consumer goods and more buildings lost their residents. All these factors — accompanied by a lack of public awareness toward buildings from the 19th and early 20th century and the fragmentation of ownership after several generations — help explain the general state of decay that many of them reached by the early 2000s.

The first significant efforts to restore and preserve the architectural heritage of downtown Cairo began about two decades ago, according to Soheir Hawas, a professor of architecture and urban design at Cairo University and a leading heritage researcher. Back then, the first university courses on modern heritage conservation started to be introduced. And in 2004, the National Organization for Urban Harmony (NOUH), a government entity that aims to apply the values of aesthetics to the exterior of buildings and urban spaces, started to work.

The two main laws that regulate modern heritage, such as the one in downtown Cairo, were drafted by NOUH, of which Hawas was a founder and chair of the Research, Studies and Policies Department from 2004 to 2013. The first law, enacted in 2006, aimed at listing all modern heritage buildings and structures in three categories, depending on the degree of protection. And the second one, enacted in 2008, is an urban harmony law for the purpose of registering entire neighborhoods. In 2017, an inventory prepared by NOUH listed 700 buildings of special architectural style in Khedivial Cairo, which is also one of the areas included in the second law, along with other neighborhoods like Heliopolis. The listed buildings in downtown Cairo fall under the responsibility of the governorate.

“Those laws together are enough to help each other to protect heritage. The laws just need to be applied and respected,” Hawas told Al-Monitor.

The main public efforts until today have focused on uplifting downtown Cairo’s outer image of buildings and streets. These have included the design of some pedestrian streets, lighting and circulation control. At the same time, the facades of some buildings have been restored, and various offices and stores have returned to the area. In recent months, the government has also been particularly active with the controversial development of the iconic Tahrir Square, which is part of a broader modernization plan of downtown Cairo.

“Restoration is very important and it should not be [just] about beautifying, about putting makeup, to cover ugliness. It should be restored to last longer and remain in good condition,” Hawas said. “What we are asking now is to go inside [of these buildings],” she added.

One of the main players in the industry is Al-Ismaelia for Real Estate Investment, a private investment company established in 2008. The company owns 25 buildings, which it started to maintain and develop, Karim Shafei, its co-founder, chairman and CEO, told Al-Monitor.

According to Shafei, the main achievements of Al-Ismaelia since its foundation include much-needed maintenance of the buildings, new rents that can be imposed by buying entire buildings and the consolidation of ownership of the buildings they purchased in the hands of a single owner. “I bought buildings from 120 heirs at some stage,” he said.

“When working according to the law, taking the right decisions under the supervision of NOUH, Al-Ismaelia and other such companies will be very successful and will complete what we started.” Hawas noted.

At the same time, Al-Ismaelia has launched a project to document old buildings from a historical and social perspective, as well as a campaign to transform downtown Cairo in an artistic and cultural hub to attract life back into the area, Shafei noted. As part of these efforts, the company is deeply involved in organizing the Downtown Contemporary Arts Festival (D-CAF), held every spring since 2012 in multiple spots of the capital’s city center. This year D-CAF was canceled due to the coronavirus pandemic.

“Al-Ismaelia is interested in downtown because it is one of the most beautifully designed neighborhoods from an urban perspective. It is emulating a lot what Haussmann did in Paris," Shafei said.

“The buildings were priced at a very low price,” he said. “You might find other districts with nice old buildings, but price-wise downtown was 20% to 25% of those prices,” he added.

“If you look at downtown today versus what it was 10 or 12 years ago, you will see that there is a significant change,” Shafei added. “The change is not complete, but you can already see the direction toward which it is heading.”

The enhancement and development of downtown Cairo, which is easily accessible, also offers opportunities to boost tourism in the area. “For now Cairo is more focused on cultural tourism. There are no places where a foreigner can go and walk around and see Egyptians live their lives,” Shafei said. “If you go to Beirut you can go to the monuments, but you can also just walk, go around and see how [the locals] live their normal lives. Cairo does not offer that experience."

Putting this idea into practice, Al-Ismaelia has organized for more than five years a weekly tour in downtown Cairo (D-Tour) — now on hold — to explore its different points of interest, including the buildings purchased by the company as they stand after their renovation.

“Our mission is to revive downtown Cairo, so this is our way to attract a different kind of tourism [to the area]. This is local tourism, but we feel that once we take this to the next level it is also going to attract [international] tourists,” Yara Salib, head of marketing and public relations at Al-Ismaelia who has more than 20 years of experience in the tourism sector, told Al-Monitor. “It is not the traditional form of tourism, but it is a small tour that we design to highlight the architecture in downtown and [aimed at] tourists who are looking for something different and more local,” she added.