The Egyptian government is implementing a project to repurpose one of the oldest and most famous buildings in downtown Cairo into a mixed-use development building to achieve profits and boost tourism. 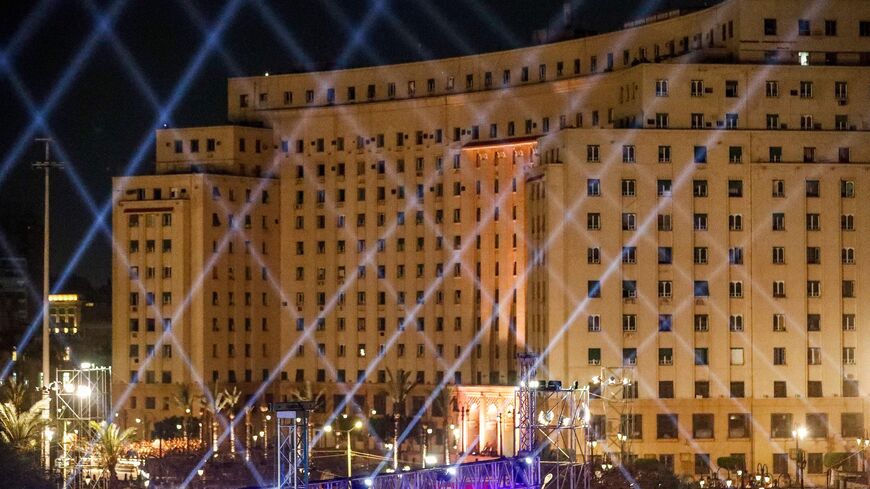 CAIRO — The Egyptian government is working to repurpose the Tahrir Complex, the most famous government building in the heart of the capital, Cairo, specifically in Tahrir Square, in order to benefit from it on several levels.

On Dec. 6, 2021, a consortium of international developers and investors, including Oxford Capital Group, Global Ventures Group and Al Otaiba Investments, signed an agreement with the Sovereign Fund of Egypt, headed by Minister of Planning and Economic Development Hala al-Saeed, to develop and repurpose the building.

The Sovereign Fund’s strategy for this project includes turning the building into a mixed-use development building (hotel, commercial center, business hub), in harmony with the nature and development efforts undertaken by the state in downtown Cairo and Khedivial Cairo.

The Sovereign Fund of Egypt is responsible for attracting private investment to the country and promoting joint investment in state-owned assets to maximize their value and support the Egyptian economy. It was established in 2018 and is managed independently by experts from the financial and business sector in accordance with a special law that allows the formation of investment partnerships.

According to Oxford Capital Group, the development plan of the Tahrir Complex includes changing the name of the building to Cairo House and turning it into a luxury hotel and a mixed-use project, with investments exceeding $200 million, which the developers described as a “catalyst to a reimagined downtown Cairo” and to future investment in the Egyptian economy.

According to Oxford Capital Group’s website, “Cairo House will include over 450 luxury lifestyle hotel rooms and serviced apartments, multiple world-class dining and entertainment venues, and over 85,000 square feet of meeting and events space, including Cairo’s largest rooftop venue."

The developers also seek to build a structural lotus pavilion, an indoor/outdoor special events and weddings venue, which will provide an additional 15,000 square feet of meeting space.

The Tahrir Complex is one of the oldest buildings in central Cairo. It was built in the middle of the last century to gather government departments in one place. It consists of a huge building built on an area of 28,000 square meters, 55 meters high, and includes 14 floors with 1,356 rooms.

On April 12, 2021, the Egyptian Ministry of Planning announced the evacuation of the complex in preparation for the implementation of its development plan.

Soheir Hawass, a professor of architecture and urban design at Cairo University, told Al-Monitor, “The Tahrir Complex is a heritage building according to Law No. 144 of 2006, which makes demolishing it in any way unthinkable, but it can be developed according to some conditions specified by the law.”

She added, “Under the law, the building enjoys a medium level of protection, which means that the development plan must preserve the building's facades as they are by restoring them into their original shape. Internally, there is a degree of flexibility for change to raise the efficiency of the building to perform its new function, whatever it is, but also within limits.”

Hawass noted that the building was built by architect Mohamed Kamal Ismail, one of the pioneers of Egyptian architecture during the first half of the 20th century. “The construction decision of the complex was signed in 1949 by King Farouk (the last king of the monarchy period in Egypt), and its aim was to gather government departments in one place to be the first service complex in the Middle East at the time.”

She further explained, “The nature of the building's design is suitable for investment, whether as a hotel or an administrative building, due to its area and the number of rooms in it, as well as the presence of a void in the middle of the building, which is an important element in hotel projects.”

Hawass stressed, “The building forms one of the walls of Tahrir Square and is part of the square's history. Its repurposing will be an improvement in the quality of the area within the plan to develop all the buildings there.”

Since 2013, the Egyptian government has been undertaking a project to develop Khedivial Cairo, which is the area lying between the Tahrir and Opera squares in downtown Cairo, as well as some surrounding squares. The project includes restoring the external facades of the Royal Opera House theater in a manner similar to the original facades of the old building. The project also aims to restore the facades of the original buildings in the city center, unify the facades of real estate and illuminate some distinctive buildings at night to showcase their unique architectural style.

Bassem Halaka, head of the General Tourism Workers Syndicate, told Al-Monitor, “The Tahrir Complex is one of the oldest buildings in Egypt that has a great history and left a big imprint on people's minds. Its repurposing into a tourist hotel will add a lot to the tourism sector, as it is located in the most famous square in Egypt.”

Halaka added, “Tourists always prefer to stay near the Nile, and the downtown area is full of different level hotels. But the Tahrir Complex will have an additional advantage, given that it has a greater capacity and allows holding all sorts of events in the same place, which will further serve the [tourism] sector.”