The Egyptian state has started unifying the facades of buildings and shops in the downtown area of ​​Khedivial Cairo. 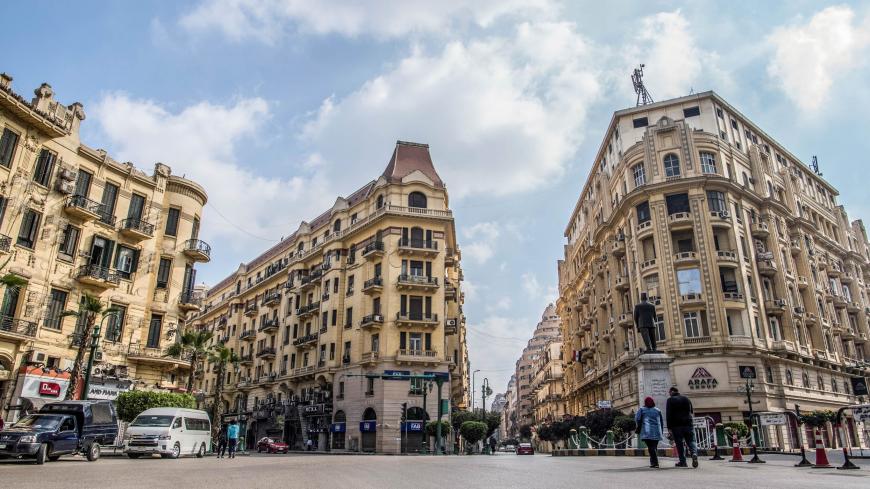 CAIRO — The Egyptian government is seeking to breathe new life into the historical downtown area of Khedivial Cairo. In coordination with the Ministries of Tourism and Antiquities, the National Organization for Urban Harmony and a number of Egyptian state institutions, Cairo governorate started painting the facades of buildings and shops in the area in one unified color. This comes in the wake of the completion of the development works at the buildings and stores in Tahrir Square.

The initiative to unify the facades of buildings in Khedivial Cairo was launched by Egyptian President Abdel Fattah al-Sisi with the aim to develop and preserve the cultural and heritage aspect of the downtown area.

In August 2014, Sisi called to prepare a comprehensive plan for the complete development of the area as well as the restoration of its urban aspect. He called for the formation of a ministerial committee headed by then-Prime Minister Ibrahim Mehleb with the membership of a number of ministries, such as the Ministry of Tourism and Antiquities and the Cairo governorate. The committee was tasked with immediately starting to develop and implement that plan in order to put the downtown area once again in the archaeological and heritage spotlight.

The downtown area includes nearly 500 properties. The National Organization for Urban Harmony, in cooperation with the institutions concerned with the project, has thus far succeeded in restoring 300 of them and unifying many building facades and storefronts. The agency chose the color light beige for building facades and shop signs and dark brown for storefronts, and work is currently underway to change all the facades and restore the traditional look of buildings.

Mohammed Hamzah, vice dean of the Faculty of Archaeology at Cairo University, told Al-Monitor over the phone that the project to develop Khedivial Cairo, especially the downtown area, is similar to the Khedive Ismail project that was aimed at transforming the downtown area and have it labeled as the “Paris of the East.”

Hamzah called for the need to make every effort to preserve the identity and heritage of that area as it is a unique area with various architectural aspects from different architectural periods.

He called on state agencies, especially the Ministry of Antiquities and Tourism, to develop a good marketing plan for this area, one that covers all levels, especially tourism, and to quickly work to build new roads for this area to boost tourism.

He also stressed the need to launch a museum devoted to the history of this area with old photographs and artistic paintings. Such a museum shall bear witness to the grandeur and brilliance of the architectural and artistic style of this unique place in the world, he noted.

Hamzah praised the Egyptian state’s efforts put into developing Khedivial Cairo and Tahrir Square as well as unifying building facades and storefronts. He also stressed that such efforts preserve the history of this area. Such a move, he said, consequently preserves the identity of the area whose unique and distinctive architectural style summarizes all architectural periods.

Shopkeepers in the downtown area voiced mixed reactions to the state’s efforts to develop Khedivial Cairo and unify the facades of buildings and shops.

A shopkeeper in Mohammed Farid Square in downtown Cairo told Al-Monitor that the development in the area is of utmost importance as it preserves its historic and unique architectural style.

He said that the downtown area in general has had a great historical and architectural stature ever since it was built during the reign of Khedive Ismail. The efforts to unify the building facades and storefronts, he noted, have restored to that area its ancient historical stature.

He added that the project to develop the downtown area has many positive aspects, including the elimination of street vendors and the preservation of the architectural style by restoring some buildings with the help of experts. He said he was very happy to have a shop in an area that the state and its apparatus are keen to develop, be it by unifying the facades, restoring some dilapidated properties or allocating certain streets for pedestrians only. This is of great benefit to shop owners and residents as it creates a calm atmosphere of architectural beauty, he said.

An owner of a shoe store in the downtown area described the decision to develop the area as half-baked. He told Al-Monitor that it does not take into account the opinions of shop owners, some of whom would have preferred to preserve the signs of their shops, especially the old ones or those with brands known for their colors. He stressed that the unification process may harm some of those stores as it leads them to lose their identity. Shoppers, he said, will not be able to differentiate between the fronts of clothing stores and shoe stores. Also, he continued, clients will have a hard time reaching the stores they are looking for.

However, Ismail said that the plan to develop downtown Cairo is good in general and serves the residents and visitors of that area, especially considering that this decision showed the state’s clear interest in this regard. Also, the project got rid of street vendors and allocated zones for pedestrians, and this attracts customers.

Asked about the time it took for the National Organization for Urban Harmony to paint the building in which his commercial shop is located, Ismail said the works required a whole month during which his shop remained closed.

In June, Cairo Gov. Khaled Abdel Aal said in a press statement that shop signs in the Khedivial Cairo area will be unified like in Tahrir Square to suit the architectural aspect of the area. Meanwhile, he added, random kiosks in Ramses Square will be removed.

Mohammed Abu Saada, head of the National Organization for Urban Harmony, said in a press statement in August that the organization is seeking to unify all shop signs and facades in the downtown area by unifying colors and signs with materials that are appropriate to the area, namely in Qasr al-Nil Street, Opera Square and Shawarby Street.