The Egyptian government ordered the demolition of the National Democratic Party’s headquarters in the center of Cairo, despite criticism as the building is considered part of Egypt’s architectural history. 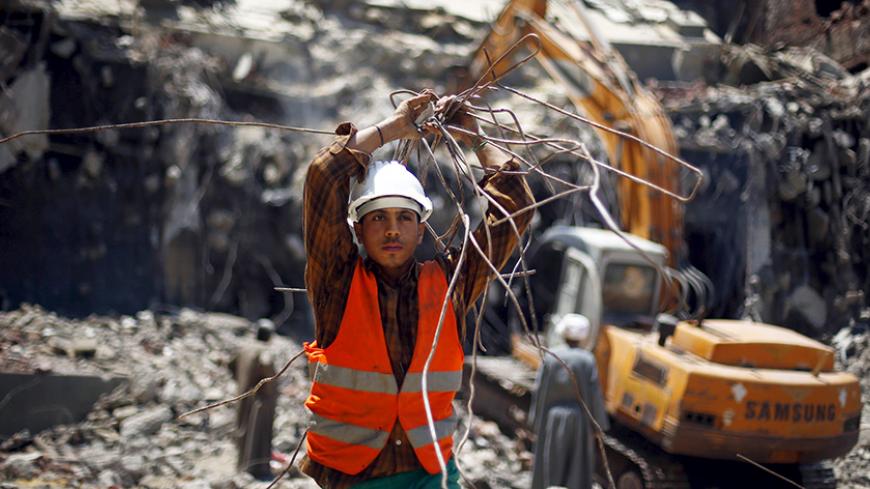 Less than two weeks ago, bulldozers and jackhammers started demolishing the headquarters of the now dissolved National Democratic Party (NDP).

It was set ablaze on Jan. 28, 2011, during the mass protests that ousted President Hosni Mubarak, but it survived the fire. For some, the charred building symbolized the imminent fate of the autocratic regime, while for others it represented chaos and mob rule.

For the past four years, architects, activists and government officials have debated the fate of the building, which has been part of Cairo’s skyline for over half a century.

In 2014, the government issued an order to demolish it, but it faced legal obstacles, since the Ministry of Culture had included it in the list of buildings with architectural heritage value. Under law No. 144 (2006), buildings on this list cannot be altered or demolished, unless they are damaged beyond repair.

“It is structurally possible to renovate and keep the building if there is a will,” said Soheir Hawas, board member of the National Organization for Urban Harmony (NOUH), which is responsible for creating the list of Egypt’s protected architectural landmarks.

When the building was designed in the 1950s, it was intended to be the permanent office of the Cairo municipality. In 1966, President Gamal Abdel Nasser used it to house the Arab Socialist Union. The building witnessed Egypt’s political shift toward a multiparty system in the 1970s, when President Anwar Sadat and his successor Mubarak used it as the main office of the NDP, among other government agencies, such as the National Council for Human Rights and the National Council for Women.

Hawas told Al-Monitor the building is “such a beautiful landmark that witnessed history in the making, and is an integral part of the Egyptians’ collective memory.”

In January 2015, a committee with representatives from multiple governmental bodies made the decision that the NDP headquarters should be taken off the list of "buildings with architectural heritage value." The decision was not made public at that time. Hawas objected and tried to convince the committee of her point of view, but her vote was overruled. The government was thus free to raze the building with no legal obstacles.

“The fire caused so much damage to the building that it would be more cost-effective to demolish it,” Gen. Mohammed Abdeltawab, head of the western Cairo municipality (the NDP building falls under its jurisdiction) told Al-Monitor.

Abdeltawab said that when a building with an architectural heritage value is deteriorating, the government forms a committee to discuss whether to keep it or demolish it, taking into consideration the costs of renovation versus demolition. In this case, the government chose the latter.

Abdeltawab refused to give any details on the economic feasibility studies that guided the government’s decision to initiate the demolition process of this building, which is currently being carried out by the Engineering Authority, a branch of the Egyptian Armed Forces.

Hawas said that generally profits for real estate investors have been the main motive for illegally demolishing hundreds of villas and old buildings that constitute Egypt’s architectural heritage. During her 11 years of working with the NOUH, Hawas witnessed more than 160 acts of vandalism against buildings with architectural heritage value, where investors tried to cause damage to the buildings in order to obtain demolition permits from the government — to use the land for more profitable purposes. Recently, the house of Ahmed Rami, one of Egypt’s most prominent poets and songwriters of the 20th century, was demolished, despite being listed as a distinguished landmark.

She added that many government officials consider urban harmony an expensive luxury that Egypt cannot afford in its current difficult economic situation.

In the case of the NDP building, it is built on one of the most expensive pieces of land in Egypt, as it is located in downtown Cairo overlooking the Nile Corniche, Tahrir Square and the Egyptian Museum.

In an op-ed published on April 11 in state-owned newspaper Al-Akhbar, Egyptian tycoon Naguib Sawiris called for demolishing the building, saying its scorched walls are “repulsive for tourists” and that the land it is built on should be privatized.

Abdeltawab said that cost and economic profits were not the only factors for razing the building. “The space the building currently occupies deserves a new modern architectural landmark that suits its very special place in the heart of Cairo,” he said.

He said that businessmen and the private sector had no role in pressuring the government to demolish the building, and that once the building is razed, the land will belong to the Cairo governorate, which is going to study how to utilize it with complete transparency.

However, such assurances are not enough to persuade critics. Mahmoud Mohammed Mahmoud Riad, head of architecture and city planning firm Riad Architecture, told Al-Monitor that the government’s approach to demolish first and think about the uses of the land later is unacceptable, and raises questions on the true intentions behind the decision. “Without an independent evaluation of the damages caused by the fire, no one can be sure if demolishing it is a necessity or just motivated by the government’s wishes,” he said.

Riad is the grandson of Mahmoud Riad, a prolific Egyptian architect who designed this building and other landmarks that surround Tahrir Square, such as the Arab League headquarters and the Nile Hilton Hotel.

Riad said that when the building was designed, it symbolized modernism, and its design was influenced by the Bauhaus school of architecture that favored functionality over ornamentation. Each floor consisted of a main corridor and office spaces on both sides that maximized the usability of space, which was not a standard practice in Egypt at the time.

He compared it to Vienna’s Gasometer City and London’s Tate Modern; both were architectural landmarks that outlived their original purposes, and were reused for the sake of preserving the history they symbolized.

In an effort to save his grandfather’s legacy and preserve the significant history represented in the building, Riad drafted seven initial visions of possible reuses of the building, turning it into either a hotel, January 25 Revolution museum, cultural center, scientific research center, training center for traditional handcrafts or center for renovating antiquities, or simply using it for its original purpose as the main office of the Cairo municipality.

After submitting a detailed report to Prime Minister Ibrahim Mehleb and President Abdel Fattah al-Sisi, Riad waited for an answer, but never received one.

The Egyptian Commission for Rights and Freedoms filed a lawsuit against the government to stop the demolition of the building, which Riad hopes would halt the process; no court date has been set yet.

Abdeltawab said that the demolition process will be completed in less than 90 days. Meanwhile, the powerful spectacle of bulldozers knocking down the walls of the building that remind the Cairenes of the 18-day uprising in 2011 is quickly progressing.

“Will we be able to explain this decision to future generations?” Hawas asked rhetorically. “My answer is no. We are erasing an important part of our history, with no proper justification.”