Cairo's governorate is destroying architectural heritage in Egypt as part of the Maspero Triangle investment plan. 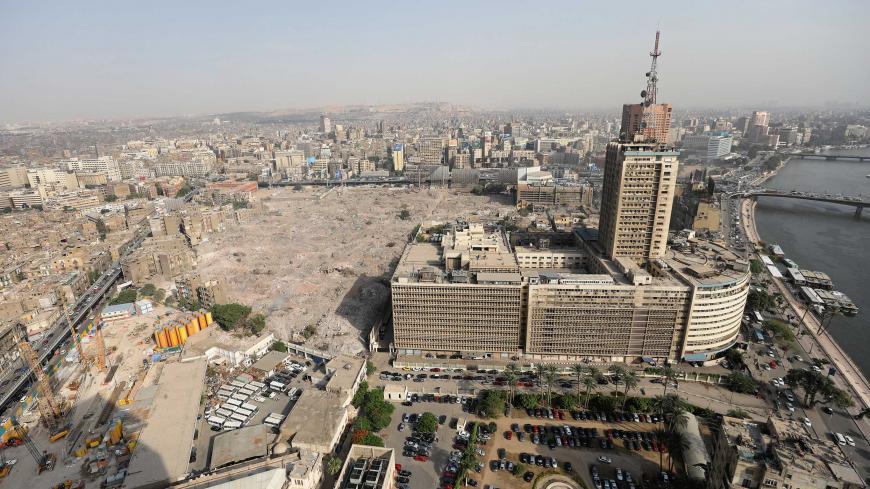 A general view of the Egyptian Radio and Television Union headquarters, also known as Maspero, on the bank of the Nile River, next to the now-demolished buildings of the Maspero Triangle slum, Cairo, Egypt, April 29, 2018. - REUTERS/Mohamed Abd El Ghany

CAIRO — As the systematic demolition and alteration of architectural heritage continues in old Egyptian neighborhoods, residents of the Bulaq Abul Ela district in central Cairo fear the loss of their homes and shops.

On July 29, the deputy governor of Cairo, Maj. Gen. Mohamed Ayman Abdel Tawab, said in statements to the local press that Cairo governorate demolished several real estate properties on July 26th Street in Bulaq Abul Ela district, including building No. 54. Tawab said the building’s residents had been evicted and demolition was underway.

The demolition is part of the Maspero Triangle development project. The Egyptian government is seeking to modernize this highly valued area adjacent to the Nile in central Cairo and turn it into a cosmopolitan investment and residential hub.

During a recent tour of July 26th Street, Al-Monitor met some residents who live or work in buildings constructed in the 19th century as part of Khedival Cairo. They relayed their anger and frustration at the “arbitrary” demolition decisions they say were made without any consideration for the status or history of the buildings.

Essam Sayed is the owner of one of the oldest watch shops in Cairo — S. Hinhayat, founded in 1907 — located in building No. 54. He said his building is a unique architectural landmark registered with the Ministry of Culture’s National Organization for Urban Harmony and its demolition is prohibited.

However, the executive authorities for the Bulaq district have been pestering residents to leave their apartments in a bid to show that the buildings are in a state of severe despair and are dangerous to their inhabitants. No compensation deals have been offered so far.

“We will not leave our homes; we are not living in slums. Our buildings have a history, and we will stay here to preserve them and keep anyone from destroying them,” Sayed told Al-Monitor. “We will also pursue all legal procedures to challenge the Cairo governor’s decision and all measures by the executive authorities.”

Atef al-Sawy, a resident of the same building, said, “We submitted a complaint to the attorney general against the executive authorities, accusing them of destroying and distorting the architectural heritage in the area in violation of the law.”

He added, “We also resorted to competent and accredited architectural expert committees to prove the safety and durability of our buildings. We refute all arguments raised by the district authorities to justify the demolition of our buildings.”

The historic buildings on July 26th Street and its surrounding area are now impeding the government’s efforts to complete the Maspero Triangle development project. Ninety percent of the demolitions have been completed. Unlike the 123 buildings and 86 shops on July 26th Street, the demolished areas consisted of slums and not heritage properties. The people living in these slums were evicted and displaced to the Asmarat project in Mokattam district and other projects allocated by the state for slum dwellers. The Cairo governorate is trying by all peaceful means to convince the residents of this district to leave their homes. It promised to build a residential area for those who want to return to the same area again, but no real guarantees have been provided.

“So far, our fate is unknown,” said Tahani al-Jamal, 60, who lives in a building registered on the Culture Ministry's heritage list. She told Al-Monitor, “The government has not informed us of the development project, and there is no guarantee that we will return to this area after the completion of the project.”

Abdel Hadi said the district authorities are bound to execute instructions from the government to demolish all buildings located within boundaries of the development project. “So far, we demolished nearly 90% of the buildings in the area,” he told Al-Monitor. “We have called on residents to vacate 86 shops and 123 housing units overlooking July 26th Street.”

Acknowledging the residents’ objection to the orders to demolish historic buildings, Abdel Hadi said, “We do not have instructions to stop the demolition process. We will try to convince the residents to leave.”

The residents of July 26th Street and the area behind Sultan Abu Ela Mosque launched a social media campaign called “Residents of July 26th — Khedival Cairo.” The campaign aims to mobilize all affected residents to instigate legal proceedings to stop the demolition of historic buildings. This initiative is added to a list of initiatives by architects and activists keen on protecting Egypt's architectural heritage.

“The law is hindering the protection of archaeological heritage,” said Michel Hanna, a member of the Heliopolis Heritage Initiative.

He told Al-Monitor that a 1996 decision by the prime minister banned the demolition of historic mansions and palaces, but in 2006 the Constitutional Court saw this decision as unconstitutional and gave the owner of the real estate property the right to obtain a license to demolish it.

Hanna added, “The National Organization for Urban Harmony was established in 2001 and tasked with preparing a comprehensive database of all heritage buildings; however, the state has yet to take any action to protect Egypt’s architectural heritage. The demolition of old mansions and their transformation into towers brought about distortions in values and aesthetics within the overall architectural fabric of Cairo’s neighborhoods.”

On the destruction of historic buildings in Maspero Triangle, he said the state has been engaged in battles with the residents for years to get them to evacuate the area in favor of investors and affluent people wanting to live on the Nile. “The protests of the residents and the appeals of architects and activists failed to keep the government from issuing a decision to demolish the entire area.”

Hanna further said that the destruction of heritage cannot be part of development. “Heritage buildings, especially on July 26th Street, are not slums but rather part of a unique architectural heritage of Khedival Cairo.”

Historian and architectural photographer Ahmed Bandari, who works at the Center for Documentation of Cultural and Natural Heritage, told Al-Monitor, “Heritage protection can only be guaranteed by the law. Documentation centers have no executive or judicial authority to stop the demolition. Under Egyptian laws, a building is only recognized as historic when it is at least 100 years old.”

He added, “We have documented the historic buildings of the Bulaq district, most of them were built in the second half of the 19th century and the beginning of the 20th century. They are not slums that must be removed to pave the way for development as the state claims.”

Bandari lamented the government's actions, saying, “The state ought to preserve the architectural and historical heritage and not help destroy this heritage.”

Despite all calls and movements by activists seeking to protect the architectural heritage in Egypt and their attempts to stop the continuous destruction and alteration of historic buildings, the Egyptian state has yet to issue legislation to prevent the demolition of national heritage buildings. What’s worse, the state has become a partner in demolishing part of this heritage by executing the Maspero Triangle project, details of which have yet to be officially published.