An Egyptian presidential decision to vacate and restore the Ataba market stirs traders’ fears of the government's desire to control the largest market in Cairo and turn it into an investment zone. 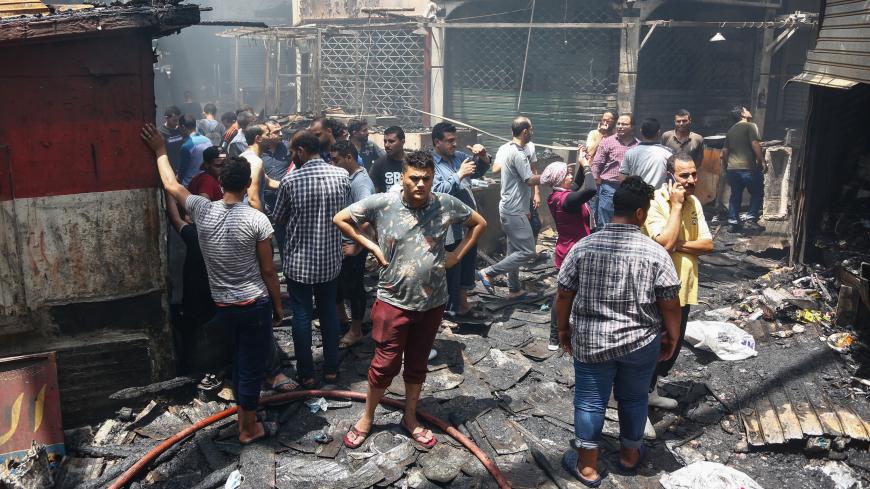 The aftermath of a fire in the vegetable market in the populous Ataba neighborhood in Cairo, Egypt, June 27, 2019. - Islam Safwat/NurPhoto via Getty Images

CAIRO — Egyptian Prime Minister Mustafa Madbouli met July 22 with Cairo Gov. Khaled Abdel-Aal, Culture Minister Inas Abdel Dayem and the head of the General Organization for Physical Planning, Alaa Abdel Fattah, to discuss a presidential directive to develop the Ataba market, the largest market in the Egyptian capital, located in Mosky neighborhood. The directive called for the evacuation of merchants and the restoration of the market following a massive fire June 27.

The historical Ataba market, built in 1892, has a strategic location in the heart of the Egyptian capital, just a few kilometers from Tahrir Square. It stretches over ​​5,200 square meters (1.3 acres), and includes 460 shops; there are also thousands of street traders in adjacent Ataba Square.

Highly popular among traders from all over Egypt as well as poor and middle-class shoppers, it is recognized as one of the largest wholesale markets in Cairo of various goods such as vegetables, clothing, electronics, furniture, toys and more.

A joint committee from the governorate and the Endowment Authority counted 180 shops — more than one-third of the market — destroyed by the fire. The shopkeepers’ losses were estimated at $2 million, according to the Mosky police department. Shop owners, however, told Al-Monitor that losses far exceeded this amount.

The deputy governor of Cairo, Maj. Gen. Ibrahim Abdul Hadi, told Al-Monitor, “The governorate is currently working on a plan to restore and rehabilitate the market with the Ministry of Endowment, the owner of the market area. This is pursuant to the directives of President Abdel Fattah al-Sisi. Governorate staff conducted field visits to review the leases of shops and discuss the current situation of the market.”

The Cairo governorate's proposals also include setting up a fire network and safety system for the historic gates of the market and linking them to the General Directorate of Civil Protection, and the establishment of a complete electrical network for the market. The proposal further calls for installing a firefighting alarm system connected to the General Department for Civil Protection.

Abdul Hadi, who attended the July 22 meeting with the prime minister, said the successive fires that have hit the market show significant problems in its infrastructure. “Add to this the difficulty of combating any potential future fire, as the shops are established in narrow corridors and surrounded by street vendors.”

Ataba market traders and shopkeepers said they fear that the government is seeking to exploit repeated fires since 2015 to expel them from where they have been working for decades.

Ahmed Sadeq, who owns an electronics shop in the Ataba market, told Al-Monitor, “We heard a lot of talk about a government plan to move us from here. Officials came to review our leases and the legal status of our activity."

The day after the fire, Sadeq, like many other traders, started restoring his damaged shop quickly, fearing any delay would lead to a state takeover of the area. His shop has been back in business since last week. He said he lost goods worth about 1 million Egyptian pounds ($60,000) as a result of the fire.

Like many other traders, he brings up a conspiracy theory that the government was behind the fire, with the intent of forcing them to leave the area. “Look, the fire started on the upper roof of the market, on the side of the upper bridge, which means that this was an arson attack,” he said.

At the market, meat shop owner Hani Sayed shows a video on his phone to other traders gathered around him. The footage shows firefighters refusing to start extinguishing the flames before getting permission from the head of the fire brigade in the area.

“Flames had been ravaging the market for an hour, without the firefighters budging. The fire brigade headquarters is two minutes away from the market," Sayed said angrily. “When they first arrived in the market, they said they did not have permits to extinguish the fire,” he told Al-Monitor, “The government is trying to force us out of this area with intentional fires.”

On May 3, another fire had broken out at the Mosky textile market in the Ataba market, leaving 45 people suffering from smoke inhalation and causing losses estimated between 30 million to 50 million pounds [$1.8 million to $3 million], according to the General Prosecution investigations. The May 11, 2016, fire that engulfed al-Rowaei market for hardware tools caused losses worth more than 400 million pounds, destroyed 237 shops, injured 91 people and caused the death of three. It was the biggest fire in the Ataba market in recent years.

In 2016, Egyptian members of parliament and some local media outlets lashed out at the government for mishandling the al-Rowaie fire. They blamed the government for how long it took firefighters to arrive at the scene. Some shop owners even claimed the fire was intentional and was aimed at getting them to evacuate the area.

Ahmed Zaki Badr, then the minister of local development, rebutted these accusations, telling the newspaper Al-Hayat on May 17, 2016, that the government would have to be faithless to do such a thing.

The government's plan to develop the Ataba market comes in tandem with a state crackdown on slums as a key part of Sisi’s national development program. “We have a plan to develop Egyptian slums by 2030, with a budget of 350 billion pounds [$21 billion]," Khaled Siddik, executive director of the Development Fund for Slums, told Al-Monitor. He said Ataba market is located in a historic and strategic area in downtown Cairo.

Since the beginning of Sisi’s term in 2014, the fund, which is affiliated with the Council of Ministers, has built several new neighborhoods to resettle residents of “unsafe" slums.

Tanneries and their workers in Magra al Oyoun in the heart of Old Cairo were relocated to the Robbiki area on Ismailia Desert Road, where a city for tanned leathers is being established. Two of the three stages of the construction project for this city have taken place. This occurred in parallel with a plan by the government to demolish houses in the Magra al Oyoun area and the relocation of their residents to the Asmarat housing project in Cairo's suburb of Mokattam.

The government demolished the Maspero Triangle area in Bulaq Abu Ela in downtown Cairo in order to turn it into a huge investment area. The government relocated part of the triangle's population to Asmarat.

Siddik said the living conditions in neighborhoods from which residents are being relocated have become inhumane.

Siddik also said the fund is working on the establishment of a new market with a budget of 250 million pounds ($15 million) to relocate the unlicensed Friday market in Sayeda Aisha to a nearby  area. The new market, 200 meters away, has a sophisticated civil protection and firefighting system.

Omnia Khalil, an architect, urban planner and researcher, told Al-Monitor, “The fund's strategy is criticized for targeting vital areas in the heart of Cairo, in particular, to turn them into investment areas.”

Khalil, a former member of 10 Tooba, an organization of architecture and engineering professionals providing research on built environment in Egypt, added, “The fund’s plan consists of transferring residents of unsafe neighborhoods to new neighborhoods in the desert. This allows the state to take over the vacated neighborhoods. But the question is why doesn't the state restore these neighborhoods and hand them back to their residents?”

She argued that the state is not being transparent with the shop owners in the Ataba market. “The state wants to evacuate the market, but it has yet to reveal its strategy regarding the owners of shops.”

Siddik said the fund is working to create investment opportunities for the state in areas of zero investment.

But Ali Radwan, the owner of a clothing shop in the Ataba market, told Al-Monitor, “All we want is for the government to leave us be. No trader will give away his store.”