How one initiative aims to help Egypt's most vulnerable women

A new initiative called “Belonging to Egypt” hopes to improve conditions in the country’s slums by focusing on improving the situation for women in these areas. 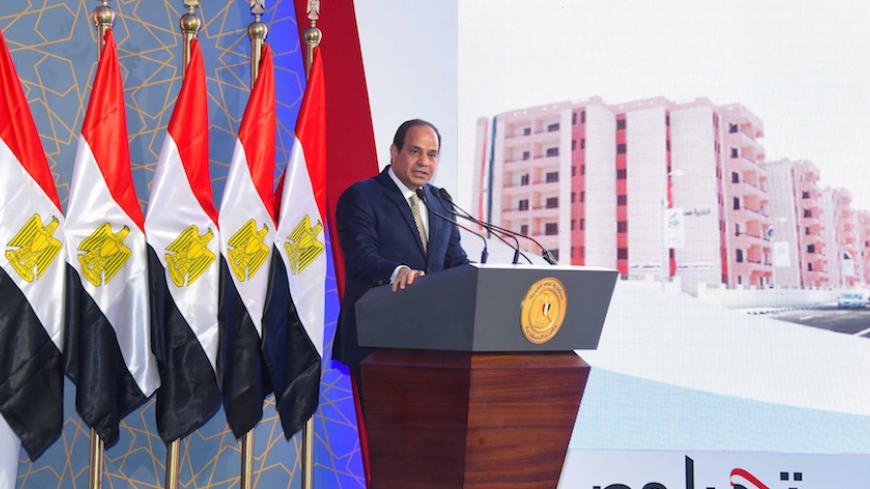 Egyptian President Abdel Fattah al-Sisi speaks during the opening of the first and second phases of the housing project "Long Live Egypt," which focuses on development in the country's slums, at Al-Asmarat district in Al Mokattam area, east of Cairo, May 30, 2016. - REUTERS

CAIRO — Nadia Zakhary, a member of Egypt’s National Council for Women and former minister of scientific research, launched an initiative last month called “Belonging to Egypt.” The project is aimed at using scientific research studies to develop slum areas and advance the status of women in slums, who are responsible for the upbringing of millions of Egyptian youths.

According to statements by former Minister of Urban Development Laila Iskander, as many as 40 million Egyptians live in slums.

Despite the importance of the efforts made by those involved in the initiative, the Egyptian government continues to bear the full responsibility of improving conditions in the slums, according to those interviewed by Al-Monitor.

Zakhary said the main goal of the initiative is “to take advantage of scientific research in order to safeguard health and the environment [in the slums], in addition to using sociological research to promote principles and ethics.” She told Al-Monitor that women and families are the primary target groups of “Belonging to Egypt.”

Regarding the areas the initiative is focusing on, Zakhary said they include “slums, low-income neighborhoods, public housing and remote areas in regions such as the Sinai Peninsula and Upper Egypt.”

The initiative was launched in Al-Asmarat, a public housing project in eastern Cairo that is set to include 11,000 residential units. The neighborhood was established this year by the Cairo governorate in cooperation with the Ministry of Housing and Local Development’s Slum Development Fund and the Tahya Misr Fund at a cost of 2.582 billion Egyptian pounds ($290 million). This project came as part of the slum redevelopment process, and comprises homes that will be given to residents of unsafe slums in Cairo.

Zakhary said the first topic of focus for the initiative is women’s issues, namely working to educate women and spread awareness on health issues “such as prevention and early detection of cancerous tumors — including breast cancer — in addition to treatment methods.” Second, she noted that the initiative will address garbage, “including the management of solid waste and how to protect humans, animals and the surrounding environment. It will also provide job opportunities for youths, and will coordinate with the Ministry of Scientific Research to develop ideas.”

She said that the projects falling under the scope of the initiative will include collecting used cooking oil and converting it to diesel fuel, as well as helping to select technologies that produce products that can be easily marketed locally or exported. This can be achieved while “preserving the environment and water resources, and entrenching new concepts about rationalizing the consumption of water and energy in its various forms.”

Zakhary noted that the initiative took advantage of social funds to provide financial support and services to support the development and growth in these areas, as well as helping to complete the required paperwork to carry out these activities.

“One of the local nongovernmental organizations working in the relevant area is chosen to provide support and disburse the required funding to projects, or to review their funding, whether through the Social Development Fund directly or contracted intermediary parties,” he said.

A second part of the initiative concerns social aspects aimed at promoting the concepts of citizenship, love for work, accepting the other and renouncing violence. “Belonging to Egypt” also has a cultural side, said Zakhary, “through the creation of a small library containing books, computers and mind-development games. [The library will also] highlight role models for young boys and girls, and hold contests and celebrations.”

The initiative also plans to host seminars and screen short films in the slums in coordination with various parties.

Zakhary added that perhaps the initiative’s biggest challenge is that “it may be too ambitious.”

Meanwhile, Entissar al-Saeed, the director of the Cairo Foundation for Development and Law, stressed that improving the conditions for women in slums and providing health and social awareness is the responsibility of the state.

“The state must approve sufficient funding to provide health insurance and proper education to families living in slums, in addition to ensuring a clean environment that includes social activities for residents, [such as through] creating youth centers,” she told Al-Monitor. However, she said that what’s even more important than official efforts is “convincing people of the importance of protecting their health and the environment.”

Commenting on the impact life in the slums has on women, Saeed said, “There are numerous families in these areas for which a woman is the breadwinner and they don’t have health insurance. [Women] are at risk of being subject to violence due to the deteriorating economic conditions and lack of education. [The latter] also contributes to cases of rape, harassment and female genital mutilation.”

President Abdel Fattah al-Sisi officially inaugurated the slum relocation housing in Al-Asmarat on May 30, while pledging to relocate citizens from all unsafe areas to government-provided housing over the course of the next three years. It is estimated that Egypt has over 350 slum areas deemed “unsafe” — most of them in the Greater Cairo region, which includes the governorates of Cairo, Giza and Qalyubia — and housing more than 850,000 people.

Yahya Shawkat, a researcher at 10Tooba, a research group comprising urban design professionals, rejects the use of the term “slums,” preferring “deprived areas.”

“These areas are deprived of infrastructure and public services, and in Egypt the state is the primary party responsible for implementing infrastructure in a comprehensive manner,” he told Al-Monitor.

He said, “There are problems related to unofficial privatization of the water [supply] in these deprived areas. Water doesn’t reach all residents, so some have to resort to private companies for water, amid an absence in state oversight.”

He said that while the initiative is important, “The priorities of those living in deprived areas should be determined through a survey and holding focus groups with vulnerable groups to speak about their key needs instead of being decided by experts.”

Shawkat said he opposes the idea of population transfers from slums to government-provided housing, describing such ideas as “useless.”

“These transfers threaten to disrupt social ties and can lead to large economic losses, since they are not tied into employment [opportunities]. No studies have been done to see the impact of these transfers,” he added.

He said the solution rather lies in restoring unsafe houses — reducing costs for the state and benefiting the family — in addition to providing basic services.

Given that 35% of families in slums are headed by women, an initiative targeting them in particular seems like a step in the right direction. However, its success still hinges on the efforts made by the state — the key player in addressing crises in slums.