The authorities in Egypt are seeking, under the Emergency Law, to limit illegal constructions and the exploitation by some of the state’s preoccupation with the coronavirus. 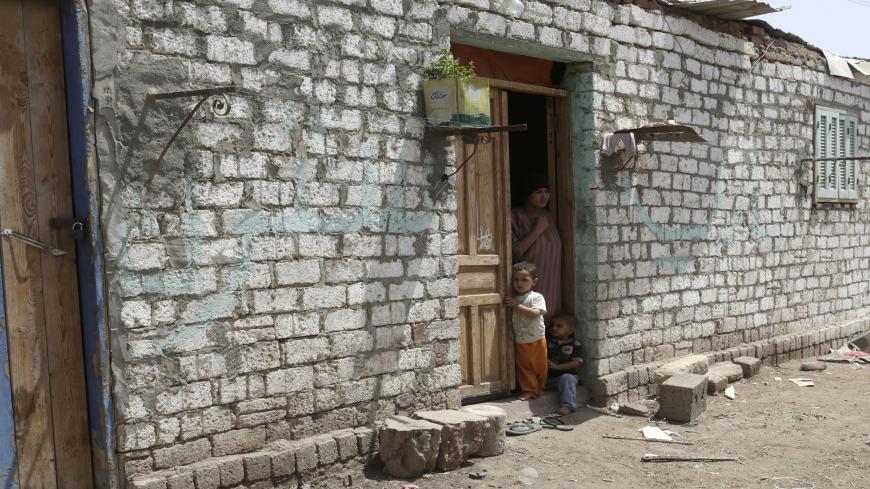 Residents of illegal buildings are seen outside their poorly structured rooms at the Qalubiya town of Kaha, about 50 kilometers (30 miles) north of Cairo June 16, 2014. - REUTERS/Asmaa Waguih

CAIRO — The Egyptian authorities are cracking down on illegal construction in a bid to prevent the exploitation of the state’s preoccupation with the coronavirus crisis in order to build more unauthorized buildings.

In a televised conference during the inauguration of the Bashayer El-Kheir 3 housing project in Alexandria on May 21, Egyptian President Abdel Fattah al-Sisi called on the authorities to introduce legislative reforms to tighten penalties on violators. He also called for bringing to justice those who construct unlicensed buildings as a preliminary step for their trial.

Sisi said that illegal construction is “worse” than terrorism. “We are not going to chase slums forever, this should end,” he said.

Egypt has seen a remarkable rise in illegal buildings amid the security vacuum that followed the 2011 uprising. Many people built multi-story buildings without obtaining the necessary permits or complying with safety standards.

Meanwhile, on April 5, Prime Minister Mustafa Madbouly warned that violators would be referred to military prosecution under the Emergency Law. In a statement, Madbouly further said the government will take strict measures against violators.

This raised the ire of human rights groups, which labeled the developments as an expansion of the prerogatives of the president and the security services.

New amendments to the Emergency Law came into effect May 7, after Sisi approved them. Under these fresh amendments, members of the armed forces were granted the power of judicial oversight. The military prosecution was also empowered to investigate crimes violating the Emergency Law, and the role of the Public Prosecution was limited to referring violators to the judiciary at its discretion.

In his April 5 statement, Madbouly further called for intensifying security campaigns and removing all building violations immediately, adding that violators will not be tolerated in this critical period.

Mohamed Abdelghani, member of the parliamentary Housing Committee and head of ECB - Engineering Consulting Bureau, defended the implementation of the Emergency Law. He said it was linked to exceptional circumstances related to the outbreak of the coronavirus.

He told Al-Monitor that the Unified Building Law of 2008 on the regulation of building works, insufficiently addressed building violations as it gave violators a margin for maneuver and evasion.

Abdelghani argued that the current exceptional measures may yield results, but these results will be temporary. “The Emergency Law will cease to be applied once the amendments to the Unified Building Law are finalized.”

Until March, the Ministry of Local Development received 300,000 requests for reconciliation with the state from building violators.

Abdelghani noted that the law on reconciliation is a temporary fix for the violations that occurred during the last period.

He pointed out that parliament is currently examining an amendment to the Unified Building Law, and is expected to finalize it soon in preparation for its approval. He indicated that one of the amendments that was approved by the government gives the state the right to impose administrative seizure over any violating building in addition to depriving violating buildings from basic utilities including electricity and water.

According to a study published by the Central Agency for Public Mobilization and Statistics in June 2016, unplanned areas of slums constitute 38.6% of all built environments in Egypt.

For Sami Amer, former dean of the Faculty of Urban Planning at Cairo University, the expansion of slums in Egypt is due to the weakness of the administrative body that follows up on building operations, not to mention local corruption.

Amer told Al-Monitor that the state does not have a specific and unified policy binding on all ministries and authorities to confront unplanned construction. He added, “Each ministry or authority acts alone. There is no coordination.”

Describing the impact of the violating buildings as catastrophic on the Egyptian economy, Amer affirmed that Egypt loses annually about 40,000 acres of agricultural land as a result of infringement on these lands and construction of illegal buildings on them. “Egypt has lost since 2011 1 million acres of arable land.”

The government is adopting a plan to eradicate slums, at an estimated cost of 31 billion Egyptian pounds (about $2 billion), according to Housing Minister Assem el-Gazzar.

In July 2019, Gazzar said that the slums in Egypt include 357 unsafe housing districts across the country, with 221 housing units. He noted that development works were completed in 192 of them.

He noted that there are 70 unplanned districts at the state level, with a surface area of ​​152,000 acres, of which 52 districts were developed.

The Egyptian government allocated to the Slums Development Fund (SDF) affiliated with the Housing Ministry a budget of 10.8 billion Egyptian pounds ($677 million) for the current financial year.

SDF Executive Director Khaled Sedeek expected all unsafe housing districts to be upgraded by the end of 2020.

On May 21, Sisi inaugurated the Bashayer El-Kheir 3 housing project — which is a continuation of Bashayer El-Kheir 1 and Bashayer El-Kheir 2 at a cost of 2.7 billion Egyptian pounds ($169 million). The project will provide adequate housing for the citizens of the fishermen shelter area in western Alexandria. It covers 200 residential buildings with 10,624 fully furnished housing units.

The governorate of Alexandria is witnessing a number of development projects to eradicate slums, most notably the development of the Ghait El Enab region and its upgrade into an urban region.