President Abdel Fattah al-Sisi has ordered the army and police to put an end to illegal encroachment of state lands across the country. 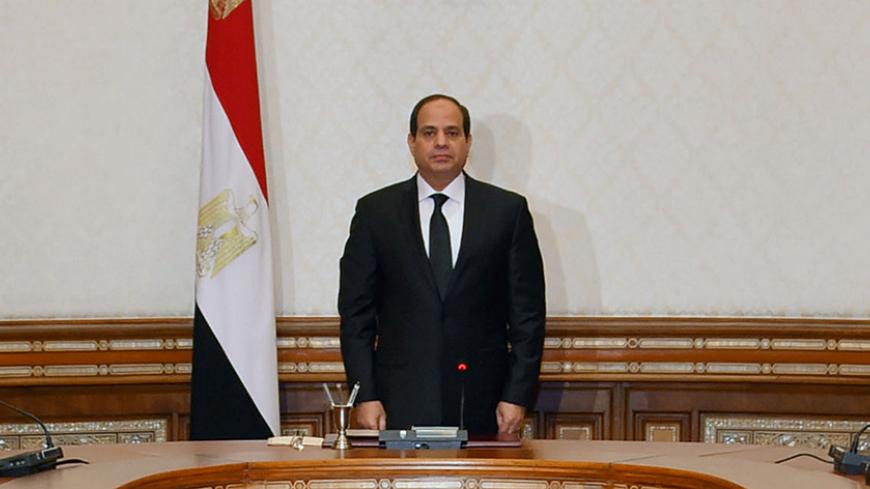 Egyptian President Abdel Fattah al-Sisi observes a minute of silence for the victims of two separate church attacks, at the Ittihadiya presidential palace in Cairo, Egypt, April 9, 2017. - The Egyptian Presidency/Handout via REUTERS

CAIRO — Egyptian President Abdel Fattah al-Sisi recently expressed his anger at the illegal acquisition of state lands and issued a strong warning to those encroaching upon these lands. "It is no longer acceptable for anyone in Egypt to encroach upon state lands. It is no longer acceptable for people to take lands that belong to the state," he said in a May 14 speech delivered during his visit to Qena province to inaugurate a set of projects.

Sisi tasked the armed forces and the police with putting an end to the illegal seizure of state lands and fully reclaim all the usurped state territories by force by May 31. "We are all for new investment projects and for facilitating the work of investors. As a state, we are trying to organize the process so that it does not spin out of control. It is not acceptable and will never be acceptable for people to [illegally] acquire such lands."

During a June 7 conference to reveal the results of the campaign to retrieve state lands, Prime Minister Sherif Ismail said the government, with the help of its executive agencies, had managed to reverse 69% of the infringement cases so far. He added that during the next phase, the governors will play a more active role and government efforts will continue, with the aim to protect state lands from encroachment and prevent any new violations, while continuing to remove any previous violations.

This was not the first time that Sisi sought to confront the illegal use of state lands across the republic. On Feb. 18, Sisi issued a presidential decree to form a committee tasked with retrieving seized public land in all possible legal ways as well as drafting reports on the factors that led to their seizure, in order to propose solutions aimed at preventing future cases.

Encroachments on state lands spread like wildfire in Egypt following the January 25 Revolution in 2011, as the government failed to fight the phenomenon amid a state of chaos and the breakdown of the state apparatus. Those involved include businessmen and farmers.

The committee — headed by the assistant to the president of the Republic for National and Strategic Projects, Ibrahim Mahlab — includes Minister of Local Development Ahmed Zaki Badr; representatives of the ministries of justice, defense and interior; and representatives of the General Intelligence, the Administrative Control and the Public Funds Investigation departments within the Ministry of Interior, the Notaries Union of Egypt and the Egyptian Survey Authority.

This committee, however, failed to achieve the objective for which it was established, as the government and the executive bodies were not so cooperative, Majdi Malak — member of the Committee on Agriculture in the House of Representatives — told Al-Monitor.

Malak added, "President Sisi ordered the armed forces and police to get rid of all kinds of encroachments on the state lands due to the committee's failure to deal with the issue. There are thousands of acres of agricultural lands that have been seized for the establishment of resorts and luxury compounds. This led to the accumulation of irregularities and to the rise of a complicated process to reverse them."

"After the Jan. 25, 2011, revolution and the ensuing chaos and insecurity that plagued the country, Egyptian governorates witnessed several encroachments on agricultural lands for construction purposes, as the state stood silent without taking a decisive position against the aggressors," he said.

On April 30, an official report from the Ministry of Agriculture's Central Committee for Land Protection pointed out that the violations of fertile agricultural land since the January 25 Revolution until April 23, 2017, amounted to 1,690,734 cases, covering an area estimated at ​​75,216 acres. The report pointed out that only 377,490 cases covering 21,204 acres have been reversed.

Meanwhile, one of the most recent scientific studies of the government's National Authority for Remote Sensing and Space Sciences revealed June 1, 2015, through satellite images analyzed by its scientists, that the rate of urban encroachment on agricultural land has increased by 23% annually in recent years in several governorates, thus resulting in a shortage in agricultural lands.

Scientists in the said authority predicted that by 2050, Egypt will lose about 17% of the delta area as a result of indiscriminate urbanization.

On Dec. 19, 2013, Ayman Farid Abu Hadid, then-Minister of Agriculture, pointed out in television statements that the ​​agricultural areas in Egypt did not exceed 8.5 million acres, and he said that the surface is very small compared to the large population. He stressed that the area needed by Egypt to cover the needs of its population goes up to 18 million acres.

In a government effort to increase the ​​size of agricultural lands, Prime Minister Ismail's government announced on Feb. 1, 2016, the start of the new Egyptian Countryside Development Company activities to reclaim 1.5 million acres with a capital of 8 billion Egyptian pounds ($441.9 million).

The spokesman for the Ministry of Agriculture, Hamed Abdel Dayem, told Al-Monitor that Sisi's initiative to reclaim all the usurped state land significantly contributed to confronting the mafia looting state lands, and several provinces succeeded over the past few days in completely recovering agricultural land from looters.

Maj. Gen. Khaled Said, the governor of al-Sharqiya province, announced May 26 that 736 cases of infringement covering 48,112 acres in al-Sharqiya have been eliminated.

Meanwhile, Dakahlia Gov. Ahmed al-Sharaoui announced May 20 that the governorate got rid of 90% of the cases of infringement on state property.

"Agricultural land is a national security issue, and its protection is a national duty because constructions on agricultural lands threaten food insecurity, especially in light of Egypt's food needs, dependence on imports and constantly increasing population," Abdel Dayem said.

"I expect the state to declare soon that it has reclaimed all of its territory, has reversed all of the related encroachments and will prevent any further infringements on its territory, especially after the adoption of a new agriculture law," Abdel Dayem concluded.

The Egyptian parliament is currently discussing several bills to amend the current Agriculture Law and the provisions related to the penalties of building on agricultural land. Each bill includes different penalties for building on agricultural land ranging from fines of up to 5 million Egyptian pounds ($275,520) to up to five years' imprisonment. The parliament is seeking to increase the penalty in order to deter violators. In addition, some of the bills call for the establishment of a new police under the Ministry of the Interior under the name of the Agricultural Land Protection Police, which has an internal building and is responsible for eliminating any encroachment on agricultural lands as soon as it occurs.

Under the current law, offenders face a penalty of imprisonment and a fine ranging from 10,000 to 50,000 Egyptian pounds ($551 to $2,755), depending on the number of irregularities. The parliament's Constitutional and Legislative Affairs Committee is still discussing the draft laws for approval.