Military trials are making a comeback in Egypt

A new decree aimed at protecting public land allows civilians to be brought before military courts. 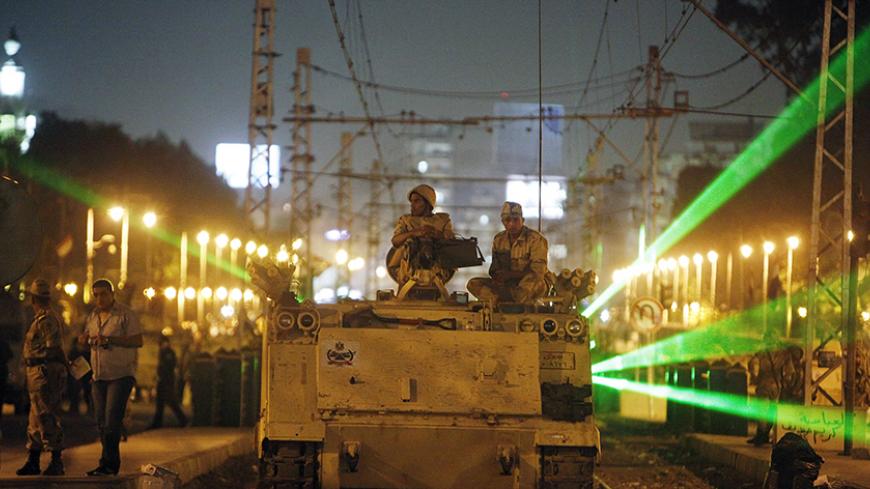 The expression “military trials for civilians” — a controversial topic in the wake of the January 25 Revolution that had nearly disappeared from Egyptian media discourse — is now making a comeback.

On June 8, Egyptian President Abdel Fattah al-Sisi issued a decree commissioning the Egyptian armed forces to be the executive entity responsible for the supervision of state-owned land located within 2 kilometers (1.2 miles) on either side of the national network of roads, which includes 21 highways.

Under the presidential decree, aimed at curbing attacks on state-owned land, the armed forces in Egypt are entitled to remove all illegal construction built on state land and bring violators before military courts.

The Egyptian state believes that this decree will enable it to prevent the future emergence of slums on the one hand and establish development projects there on the other.

Only a few hours following the issuance of the decree, the armed forces held a press conference that was attended by several leaders to explain the details of the decision and the role assigned to the army units.

A statement issued at the press conference pointed out that military law would be directly applied to violators. Not only would violators have the land in question withdrawn from them, but they would also have to stand before military courts, the statement added.

“The field mobilization formations in areas under the army’s control have been officially informed of the decree issued by President Sisi,” the armed forces’ statement said. The statement also announced that infringements on state-owned land are being removed.

However, referring violators to the military judiciary conflicts with Article 204 of the Egyptian Constitution, which states that “civilians cannot stand trial before military courts for crimes that represent a direct assault against military facilities, military barracks or whatever falls under their authority; stipulated military or border zones; its equipment, vehicles, weapons, ammunition, documents, military secrets, public funds or military factories; crimes related to conscription; or crimes that represent a direct assault against its officers or personnel because of the performance of their duties.”

Engineer and urban researcher Yahya Shaukat told Al-Monitor over the phone that commissioning the armed forces to control the state lands all the while allocating land plots to the military — such as 1.3 square kilometers of land in the Ain Sokhna area in Suez east of Cairo — aims to reduce the phenomenon of the seizure of lands that have investment potential, especially those located in remote areas such as the Bahariya oasis.

Shaukat added that many of the state-owned lands are located in remote areas far away from the government’s daily control, and that this is what prompted Sisi to issue this decree. Shaukat said it would be easy for the armed forces to protect those lands given the tasks that they usually perform.

“There are no clear criteria as to the removal and keeping of some infringements,” the urban researcher said as he criticized the government and accused it of being behind the infringements taking place. The state allocated lands to associations and bodies that have nothing to do with investment, such as NGOs [nongovernmental organizations],” Shaukat added.

Sarah Sharif, a member of the “No to military trials for civilians” campaign, told Al-Monitor that neither the armed forces’ involvement in the control of state lands nor the referral of trespassers to military justice is likely to help the economy.

“Civilians have been standing trial before military courts for six years now without this helping to get rid of thugs or to stop terrorist operations, let alone achieve growth,” Sharif said.

Sharif said, “The results of the presidential decree will have no less negative impact than the 2014 Law No. 136, which allows the army to protect and secure public and vital state facilities and provides for the referral of the crimes committed against these facilities to the military judiciary.”

Sharif criticized the referral of civilians to military courts and said that this does not bring justice to them, knowing that military courts neither provide lawyers nor guarantee fair investigations given the existence of a dispute between the accused and the military establishment.

For his part, Atif Mikhalev, the parliament’s Human Rights Committee representative, said that there is no reason for concern over the expansion of the military trials: “On the contrary, we want more of these trials because they are the only way to deter these thugs from assaulting the land and violating the sovereignty and prestige of the state.”

Mikhalev has personal experience with land seizure. “When I bought a plot of land in Mersa Matruh and Bedouins captured it, I had to flee from the land because they were armed,” he said.

Ahmed Ayoub, spokesman for the state land recovery committee headed by former Egyptian Prime Minister Ibrahim Mahlab, said that “the committee has thus far managed to recover 43,000 acres of the total state lands, and there are no exceptions when it comes to removing infringements.”

Ayoub added in a telephone conversation with Al-Monitor that “there are certain humanitarian and poor cases that have been present on the lands for a long time. These do not make any profit from their presence on those lands, and they are being respected.”

Ayoub also stressed that similarly to the agriculture, housing and interior ministries, the Egyptian armed forces are represented in the state land recovery committee through the assistant secretary of defense. He said that “law enforcement forces, represented by the civilian police, are the ones responsible for removing the infringements.”