Residents of this Egyptian village forced to leave their homes

Forced evacuation and a security campaign targeted the residents of Sayadeen village in Alexandria governorate in northern Egypt. 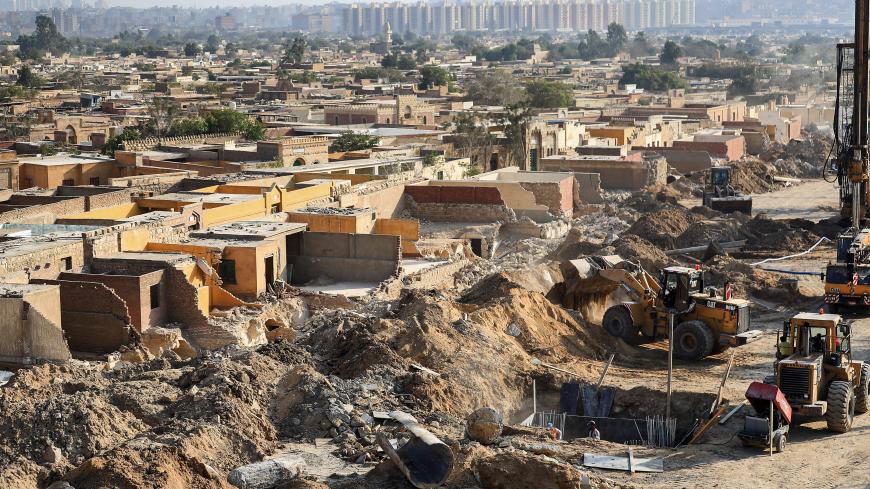 This picture shows a view of ongoing demolitions of graveyards and construction work for a new flyover bridge passing through the Basatin cemetery, south of historic old Cairo, Egypt, July 22, 2020 - KHALED DESOUKI/AFP via Getty Images

A resident of Sayadeen village in Alexandria governorate revealed details about the Egyptian security forces’ attempt to forcibly remove the inhabitants of the village despite their possession of documents proving their ownership of the land and properties. The inhabitants were beaten, and dozens were arrested and jailed after being referred for investigation to the military prosecution in Alexandria.

Ahmed Abdul Menhem, who hails from Sayadeen village, told Al-Monitor, “The residents were surprised with the security forces storming the village with armored vehicles on July 18, in an attempt to force them to leave. They promised to give the residents alternative housing, but they rejected the offer. The security forces then threw tear gas grenades at them.”

Abdul Menhem, who witnessed the incident, said, “After the residents escaped, the security forces arrested dozens in an arbitrary arrest operation and raided houses to terrorize them. We were forced to leave our houses and village at once. It later turned out the alternative offered was housing with no ownership and without compensation, reneging on their previous promises. This would have made us tenants and not home owners. When we refused, we were attacked.”

On July 19, the Cairo-based Egyptian Commission for Rights and Freedoms published surprising information about the 65 people that were detained, saying that “they were referred to the military prosecution, which decided to imprison 42 inhabitants after releasing 13 women.”

The commission noted that the military prosecution accused the arrested civilians from the village of “gathering, protesting and attacking army forces and police officers and wounding them.”

The Egyptian authorities are trying to evacuate the villagers under the pretext of not owning the properties or lands in Sayadeen village. The move also comes as part of a plan to develop the area and build residential units.

Article 204 of the 2014 Egyptian Constitution criminalizes referring civilians to the military judiciary or bringing them before a military court, stating, “Civilians cannot stand trial before military courts except for crimes that represent a direct assault against military facilities, military barracks or whatever falls under their authority.”

Manar Amer, a resident of Sayadeen village, told Al-Monitor, “Two of my children were arrested. They did not even participate in any protests, so we were surprised to see the security forces raiding our houses and arresting them. We then found out that all the men arrested were imprisoned after bringing them before the military court in Alexandria.”

One of the lawyers who attended the investigations with those charged in the case told Al-Monitor, “The arrest and incarceration of the residents constitute a clear breach of the law and constitution.”

The lawyer said on condition of anonymity, “The constitution clearly incriminates the forced displacement of residents from their homes. Residents had to leave their houses and were deprived of their land ownership in violation of the law. They were even referred to investigation and imprisoned before the military prosecution, which is not the competent authority in this case.”

The lawyer referred to Article 63 of the 2014 constitution, which states that “all forms of arbitrary forced migration of citizens are forbidden. Violations are considered a crime without a statute of limitations.”

The lawyer added, “The imprisonment of the detainees is being renewed every 15 days, while residents are still outside their homes with no solution for their crisis.”

Associate Housing Minister Ahmed Adel Darwich defended the evacuation of Sayadeen village and moving residents to other housing units. He told Al-Monitor over the phone, “The goal is to develop the area they live in and offer them alternative housing instead of a life in ghettos. All the residents are refusing to move to a better place in terms of services and facilities. The government had to do something about that.”

He refused to respond to claims about depriving the owners of the land of their ownership, instead giving them rented properties and apartments, or to reveal the reason they were referred to the military prosecution instead of a regular civil judge.