Egyptian security forces are trying to expel residents of a vital area in Alexandria, claiming that their homes were randomly and illegally built. 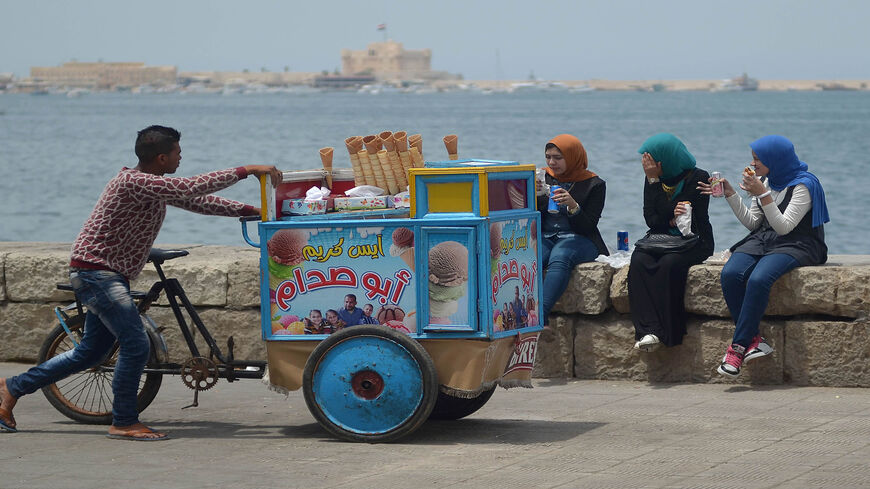 An Egyptian ice cream vendor pushes his cart in the coastal city of Alexandria, May 21, 2016. - STRINGER/AFP via Getty Images

CAIRO — Mohammed Ismail woke up June 4 to the sounds of security forces trying to enter the Izbat Nadi as-Sayd district in Alexandria where he resides, in an attempt to evacuate the area and expel the residents from their homes. The situation escalated and clashes broke out between the residents and the security forces.

The Izbat Nadi as-Sayd district sits at the entrance to Alexandria governorate, 200 kilometers (124 miles) north of Cairo. Egyptian authorities are seeking to evacuate the area and give the residents alternative apartments for rent in other areas, as part of government plans to give the land to investors and allow the army’s Engineering Authority to set up projects there, which the residents strongly reject.

“The security forces raided the area despite negotiations between the residents and the authorities in an attempt to solve the crisis and leave us in our homes in peace. But without prior warning, the security forces decided to forcefully enter and fire tear gas against the angry residents who were protesting,” Ismail told Al-Monitor.

He said, “The census committee formed by the Ministry of Housing [to inventory the houses and their residents] told us that we will be moved to another area and given apartments for rent, but this is unfair. Many of us own real estate, small factories and shops. How can we suddenly become tenants without taking our full financial rights? We objected once again but no one listened.”

According to Egyptian human rights organizations, the security forces arrested 13 residents of the area during the eviction process. The Public Prosecution ordered June 5 the arrest of all of them for 15 days pending investigation, accusing them of “gathering, demonstrating, displaying force and sabotaging a public facility.”

The Egyptian Initiative for Personal Rights (EIPR), a human rights organization working to support victims of forced evictions and provide legal support, issued a statement on its Facebook page June 9 revealing that the security forces “arrested 40 people from Izbat Nadi as-Sayd and illegally detained them in a central security camp; the military police interrogated them.”

EIPR demanded that all unlawfully detained residents be released and the work of the census committee be halted until a solution is reached that preserves the residents’ dignity and rights.

In July 2020, Alexandria Gov. Mohammed al-Sharif announced the start of a project to develop several residential areas, without evicting residents, among which was the Izbat Nadi as-Sayd district. But a year after the start of the development process and the allocation of the necessary budget, development operations stopped and residents were forcibly evicted.

Speaking to Al-Monitor, Sharif denied any use of force against the residents of the Izbat Nadi as-Sayd area, and noted that what had happened “was the arrest of some rioters and rumor mongers.”

He said, “The truth is that Izbat Nadi as-Sayd was included in the governorate's slum areas, and the decision was to remove the area and settle the citizens in other nearby residential areas.” According to him, about 6,000 families, 1,000 shops and commercial establishments are to be moved to nearby locations.

Sharif concluded, “There is a zero-tolerance policy when it comes to slums and construction on state-owned land. Any area that is proven to be random and illegal will be removed immediately. We do not want to have any residential areas that represent a danger to the lives of citizens with constructions violating safety standards or units that are prone to collapsing and threatening the lives of citizens.”