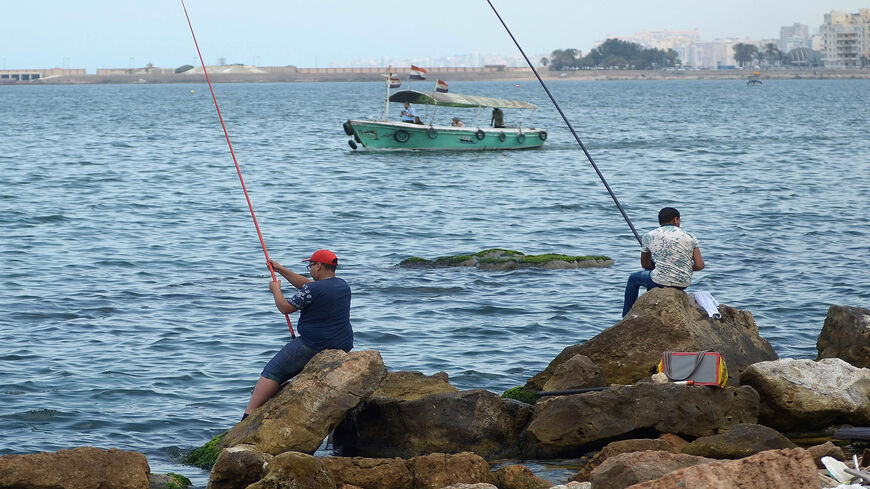 Egyptians fish on the seaside in the coastal city of Alexandria, Egypt, May 21, 2016. - Stringer/AFP via Getty Images

During the inauguration speech at the United Nations Climate Change Conference (COP 26) held in the Scottish city of Glasgow from Oct. 31 to Nov. 12, British Prime Minister Boris Johnson mentioned the Egyptian city of Alexandria, which is one of the cities threatened to disappear under rising seas should the earth temperature rise by 4 degrees Celsius (7.2 degrees Fahrenheit), unless the climate changes are addressed.

Johnson's statements on Alexandria received wide media coverage in Egypt and a great deal of interest from Egyptians, especially on social media, where many online users expressed their fears, urging the government to take proactive steps to confront climate change. Others seem to be skeptical of Johnson’s warnings, deeming them as pessimistic of the future.

Alexandria governorate is located on the Mediterranean coast in northern Egypt and Alexandria is considered the country’s second capital. It was founded by Alexander the Great in 332 B.C. and named after him. The city’s area is estimated at 2,679 square kilometers (1,034 square miles), with a population of more than 5 million people.

Alexandria is home to many distinctive landmarks, including the Alexandria Port, the largest in Egypt, handling about 80% of the country’s imports and exports, and the Great Library of Alexandria, which includes over 8 million books, in addition to several museums and archaeological sites such as the Citadel of Qaitbay, Pompey's Pillar, among other landmarks.

He explained that the city of Alexandria itself is mostly built on an embankment wall high above sea level by an average of 5-30 meters (16-98 feet). According to Sharaki, the endangered zone starts from Abu Qir, northeast of the city, which is the entrance to the seawater, all the way to the northern delta. It includes the governorates of Beheira, Dkhalia, Kafr al-Sheik and Damietta, which are threatened to disappear under rising water levels and turn into one giant lake.

While some Egyptian officials acknowledge the climate change effects on the Egyptian coast, others are keen on reassuring citizens about the state’s readiness to address such changes.

In a televised statement, Alexandria Gov. Mohamed al-Sharif said that the governorate has been witnessing since 2015 an increase in torrential rain rates, causing several problems. He noted that the state is making concerted efforts to face the climate changes, mainly by setting up concrete walls to protect beaches and other areas that might be exposed to the rising water risk.

Meanwhile, Minister of Water Resources and Irrigation Mohamed Abdel Aty stressed that Johnson's statements about Alexandria are not something new for Egypt, noting that the government had begun years ago to implement beach protection works and is also working on removing all encroachments on the Nile River to make room for more water absorption.

“We are working according to a vision that spans over years. The scenarios put forward by the British prime minister will not happen today or tomorrow. His statements were only meant to be a red flag for the whole world to start taking action,” Abdel Aty said.

In this regard, Sharaki said, “We should not be afraid of statements related to the effects of climate change because it takes about 500 years for the earth's temperature to rise by 4 degrees [Celsius] and this happens gradually and can be predicted and prevented.”

He noted that humans are not solely responsible for the rise in the earth’s temperature for the present time, and that the globe is going through what is known as the “greenhouse or interglacial period” that lies between the two ice ages and is characterized by its warm climate. Even if humans leave the earth, temperatures will keep rising, but perhaps at a lower rate than they are now.

He added that in addition to the climate issue, close attention ought to be given to people’s health, which is being affected by industrial emissions.

Meanwhile, Egyptian Environment Minister Yasmine Fouad called on major industrialized countries, which have the largest share of greenhouse gas emissions, to lead by example and start working to reduce these fast-paced emissions and to commit to paying an annual sum of $100 billion that was agreed on to help developing countries address climate change, in addition to the long-term financing plan, amounting to $1 trillion, to meet the basic requirements to confront the phenomenon.

In televised statements, Fouad confirmed that Egypt is working at a rapid pace to address climate change, while it contributes only 0.06% of the carbon emissions globally.

During his speech at the Glasgow conference, Egyptian President Abdel Fattah al-Sisi called on developed countries to fulfill their pledge to provide $100 billion a year for addressing climate change in developing countries.

Sisi said that Egypt has completed the preparation for the National Climate Change Strategy for 2050, and has been taking serious steps to implement a sustainable development model, including adaptation to climate change effects, in a bid to bring the percentage of the government-funded green project to 50% by 2025 and 100% by 2030.

Meanwhile, Waheed Saudi, a climate expert, told Al-Monitor, “Every country has the responsibility to address climate change, but I doubt that many will commit to reducing polluting emissions, especially since major countries, namely Australia, China, India and the United States, did not take part in the agreement to gradually eliminate coal plants — the largest source of polluting gases - which was put forward on the sidelines of the COP 26 and was approved by 40 countries."