Cairo has accepted a funding grant for climate change preparation, but experts fear the threats posed by rising sea levels and increasingly turbulent weather will outpace Egypt's ability to adapt. 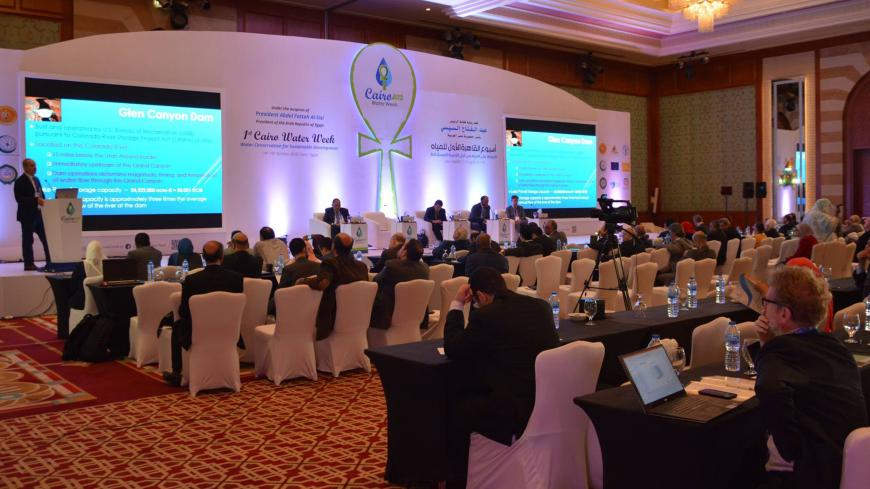 Delegates listen to a speaker at Cairo Water Week in Cairo, Egypt, in this image posted Oct. 16, 2018. - Facebook/cairowaterweek

CAIRO — Egypt held its first Cairo Water Week Oct. 14 -18 to discuss Cairo’s concerns over the effects of climate change. The meeting closely follows the Egyptian government's acceptance of a $31.5 million grant from the Green Climate Fund Oct. 2 to protect the areas that are most affected by climate change, which threatens to flood the Nile Delta, increase desertification and impede investment for decades in coastal areas.

Egypt will use the funds on projects to reduce coastal flooding in five governorates (Port Said, Damietta, Dakahlia, Kafr El Sheikh and Beheira), a strip of land stretching over 70 kilometers (43 miles). It will also set forth a national monitoring plan on climate change and rising sea levels in these areas, a project that will take seven years to be implemented.

Climate change threatens to cost Egypt billions of dollars in investment and the deterioration of the tourism sector. The rising sea level is expected to erode the Egyptian coasts and damage the coral reefs. High temperatures also threaten to accelerate the deterioration of monuments and historical landmarks.

According to the Egyptian government, at least five million people are expected to be displaced from the Nile River Delta if appropriate measures are not taken. In previous statements, Egyptian Minister of Water Resources and Irrigation Mohammad Abdel Ati said that the ministry’s climate change studies predict that Egypt’s two main crops, wheat and maize, will decrease by 15% and 19% respectively by 2050, and 15% of the most arable lands in the Nile Delta will become salinized.

The studies also suggest that four million people will lose their jobs as a result of the deterioration of agricultural land, greatly worsening unemployment. Egypt’s annual water quota of the Nile water, about 55.5 billion cubic meters, will be imperiled as climate change affects on rainfall patterns in the Nile Basin.

In an exclusive Oct. 15 interview with Al-Monitor on the sidelines of Cairo Water Week, Egyptian Minister of Environment Yasmeen Fouad called the agreement with the Green Climate Fund a great step by the Egyptian government to cover the cost of protecting the coastal areas, but affirmed that it will not be enough.

“We still have a long way to go to achieve our goals to adapt to the impact of climate change. We still hope to have more funding to support efforts in this regard,” Fouad noted, saying, “Egypt is one of the most affected countries by climate change. Egypt's strategy until 2030 includes plans for adaptation in health, environmental, water, economic and social sectors.” She added that it's impossible to predict the cost of such massive and evolving efforts.

Suleiman explained that the sea level is expected to rise by 50 centimeters (20 inches) over the next 100 years. “The danger lies in the fact that high winds and storms are increasingly occurring in an unprecedented way if we take a look over the past 10 years between 2009 and 2018. We've monitored the sea waves of the delta coast and saw that they … have [increased and] caused several coastal areas to sink,” he said.

He added that many development projects are already threatened by climate change in the Nile Delta, including urban development projects in Damietta and New Mansoura and oil and industrial ventures in the new city of Metoubes in Kafr El-Sheikh governorate. The Burullus Power Plant, the largest in the low areas next to the lake Burullus, is threatened with flooding.

“There are also fish farms on the coastline that are sinking as result of climate change,” Suleiman noted.

According to Khalid Kheireddine, director of the Institute for Climate Change at the National Water Research Center in Egypt, the cost of climate change adaptation programs was initially estimated at $1 billion per year until 2030.

He pointed out that CORI has been working on implementing a project with the Ministry of Environment to create an interactive map identifying the risks and threats of climate change to help decision-makers address affected areas. “Future development plans cannot be developed in the Egyptian coastal areas without being preceded by protection programs,” he said.

"We spent an estimated 3 billion pounds [$170 million] in the past few years on programs to protect threatened areas in the delta," said Mahmoud El-Saadi, head of the Egyptian Public Authority for Shore Protection. He explained that protection projects include establishing sand fences to form natural barriers, a method that has been tested on the Mediterranean coastline.