Egypt announces state of emergency following a major flood in the coastal governorate of Kafr El Sheikh as a result of turbulent weather. 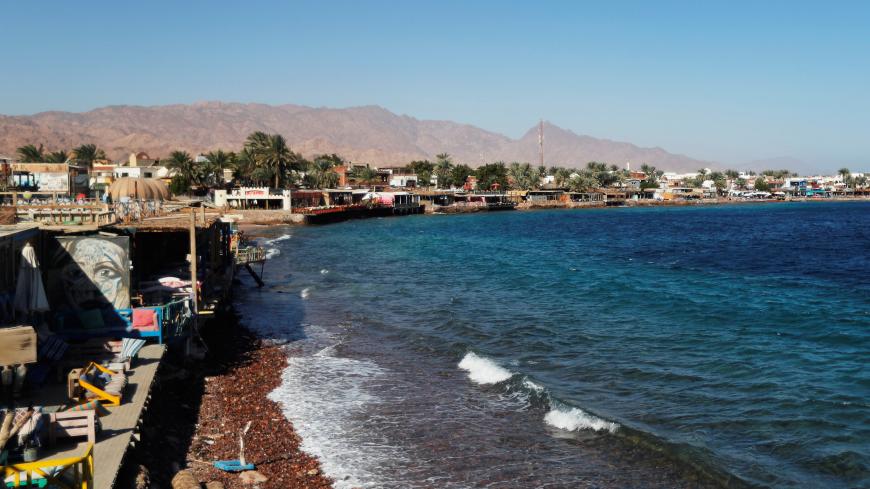 A general view of Dahab Bay on the southeast coast of the Sinai Peninsula in Egypt, Dec. 13, 2018. - REUTERS/Amr Abdallah Dalsh

CAIRO — Egyptian Minister of Water Resources and Irrigation Mohammad Abdel Ati announced a state of emergency Dec. 7 after a storm surge flooded the coastline in the governorate of Kafr El Sheikh.

The incident alarmed the state, which worried that climate change is contributing to rising sea levels and eroding Egypt's coasts.

In a Dec. 11 media statement, the head of the Egyptian Public Authority for Shore Protection, Mahmoud Saadi, said the authority has started implementing three projects to protect the coasts of Kafr El Sheikh, starting with the protection of the Kitchener Drain and the coastal area north of the fish farm in Berket Ghalyoun as a first step. This is in addition to coastline protection, including beach nourishment in the Shark al-Rous area, to the east of the basin. The Kitchener Drain, also known as the Gharbia Drain, passes through Gharbia, Kafr El Sheikh and Dakhalia governorates, with the majority of it in Gharbia.

Saadi said the authority is making great efforts to build new breakwaters in a bid to keep waves that have exceeded 5.5 meters (18 feet) at bay as well as to replenish beach sand and prevent the sea from further eroding the coast.

The cost of the three projects, aimed at protecting the northern coast of the governorate and stretching over 28 kilometers (17 miles), is 250 million Egyptian pounds (about $14 million), according to a Dec. 11 statement from Kafr El Sheikh governorate.

The beaches of the Baltim resort and other towns were nourished with sand.

He added that the governorate has been preparing every year for such incidents, given that Kafr El Sheikh’s coastal areas are threatened with inundation as a result of climate change. He said towns along the coastline were not built much above sea level and therefore are threatened with flooding.

The governor also said Kafr El Sheikh is an agricultural governorate and that the sea water in the recent flooding made its way into the Abu Dukhan canal, which feeds agricultural lands in the area.

Engineer Mahmoud al-Saadi told Al-Monitor that the authority went on full alert following the Kafr El Sheikh inundation and announced a state of emergency for all the nation’s coasts, mainly for the delta beaches that are more prone to erosion due to violent thunderstorms.

He said the authority has set up a central operations room in its headquarters, operating 24 hours to monitor any storm surge and to follow up on coastal protection work through communication with all its departments.

Saadi said this time of year is critical, as thunderstorms and strong tides cause sea level surges and flood coastal areas.

He said the authority is implementing several projects in three governorates, including Damietta, Alexandria and Kafr El Sheikh, to protect shores from erosion, at a total cost of 1.8 billion pounds ($100.8 million).

Mohamed Suleiman, former director of the Coastal Research Institute (CORI), told Al-Monitor the Nile Delta is the most threatened delta in the world, as it is so low-lying and is gradually sinking.

He said the coast of the Nile Delta is sinking at a rate of 1 to 3 millimeters (0.04 to 0.12 inches) per year, which does not seem alarming. But he said that the Mediterranean Sea level is also rising by 2 millimeters (0.08 inches) a year and that this is what makes things worse in the delta. He said sea level is expected to rise by 50 centimeters (20 inches) over the next 50 to 100 years, which will inundate many areas along the coast.

Suleiman said climate change is evident in the increase of weather events involving high winds and major storms, which used to occur every 20 years on average. He said that after such events occurred only a couple of years apart, in 2013 and 2015, "The month of January 2018 saw two major storms, which threaten the Egyptian coasts.”

He said many risks resulting from sea level rise are economic, as much arable land will become salinized in the affected governorates. He said it is unlikely that residents in the coastal governorates will be displaced at this time because the sea has not risen to a threatening level of complete inundation.

Suleiman also said methods of protection vary from one case to another, noting that beach said nourishment is the most practiced method in Egypt, followed by submerged or high breakwaters depending on the area. He said the areas that are most threatened with sinking are ones adjacent to lakes, including ones in the delta, because of human encroachments on them.

He called upon the Ministry of Irrigation and Water Resources to preserve the wall of Mohammed Ali, located in the Abu Qir Bay, as it protects the southern part of the area as well as Lake Mariout. He said the wall was the first means of beach protection used in Egypt.

Of note, the Egyptian government accepted a $31.5 million grant from the Green Climate Fund on Oct. 2 to protect the areas that are most affected by climate change. This is the biggest grant Egypt has ever received for environmental projects.

The Water Research Center of the Ministry of Irrigation and Water Resources held a meeting for the project’s Steering Committee on Dec. 17. The project was implemented in the five most affected governorates, Port Said, Damietta, Dakahlia, Kafr El Sheikh and Beheira.

Agriculture and farming
Environment and nature