Palestinian officials are trying to stop the erosion of the Gaza seashore with concrete, rubble of houses and local resources in order to avoid collapses and the sinking of residents and their homes. 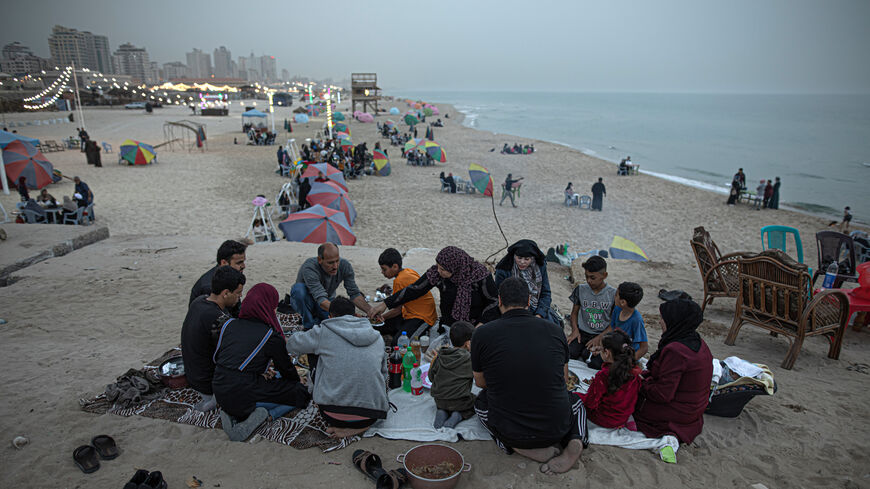 Gazans wait for the sun to set to break their fast on the beach of Gaza City, Gaza Strip, April 29, 2022. - Fatima Shbair/Getty Images

Gazans flock daily to the shores of the Gaza Strip as the beach is the only breathing space for the residents in the besieged enclave.

After authorities in Gaza declared the beach safe for swimming, free of pollution, in May, officials and government institutions warned more recently of an environmental disaster that could cause tourist buildings and archaeological sites located on the seashore to collapse. It could lead to material and human losses due to the erosion of the Gaza seashore over the past years.

In light of the fast erosion, the most populated areas in the Gaza Strip are at risk, such as the ancient city of al-Balakhia in the northwest, al-Shati refugee camp west of Gaza City, the beaches of Deir al-Balah governorate in central Gaza, and some tourist hotels near the beach as well as the Swedish Village in southern Rafah in the south of the enclave. In previous years, the village, named after Swedish soldiers who were stationed there in the 1960s, was at risk of sinking, and the authorities had used simple resources to protect it, despite how difficult that task proved.

Khaled Haniyeh, resident of al-Shati camp, whose population is about 103,000, told Al-Monitor, “I am thinking of leaving the camp with my family. It is no longer safe, and there are ongoing warnings about houses collapsing. The camp has seen massive soil and shore erosion recently.”

He said, “In previous years, the distance between water and land was 50 meters [164 feet]. Citizens would relax on the beach in light of the long power outages, but now due to erosion the distance to the sea has become almost zero, and there is no shore or place to sit. Every winter, the constant fear of the camp completely sinking resurfaces.”

Concerned, Haniyeh added, "The citizens of the camp have monitored the rise in the sea level in recent years, and we have installed broken refrigerators, concrete blocks, large stones and car tires to prevent sea erosion. The local authorities have also placed the rubble of houses destroyed in the last war to protect the beaches, and ordered the placing of giant concrete blocks along the coastline to prevent beach erosion. But unfortunately they are all ineffective, temporary solutions.”

Bahaa el-Din al-Agha, director general of the environmental protection department at the Water and Environment Quality Authority, told Al-Monitor, “The phenomenon of erosion of the Gaza seashore began in the 1970s, due to many reasons, most notably the construction of ports and the formation of spits. The first sea port was built in the Gaza Strip in 1974, which caused erosion of the beaches in northern Gaza and al-Shati camp. The second port caused erosion of the beaches of the central governorate, and the third port, which Egypt built in 2012 on the Palestinian-Egyptian maritime borders, eroded the shore of the city of Rafah.”

He said, “The sand-carrying current prevents erosion from south to north. But the presence of any vertical body on the shore, whether it is a port or a spit, intercepts this current and leads to the deposition of sand carried by these currents to the south of this vertical body, causing erosion directly in the north of this body. This is the major cause of erosion.”

Agha warned, “Gaza is under threat and is expected to flood in [the coming years]. I believe that the problem of beach erosion is a very serious one, and its negative effects may lead to the flooding of the entire endangered area in one moment as a result of severe climatic changes or heavy rainfall in winter. This would lead to collapses along the coastal line, and soil and beach erosion, resulting in material and human losses as well.”

He noted, “We also detected a great threat to al-Rasheed Street, north of the Port of Gaza, and this consequently threatens the infrastructure and adjacent buildings. UNRWA prepared a project to protect this area from erosion in 2000, but the erosion happens over time. The sea goes beyond the initial reinforcements and the tide continues to flow, threatening new areas.”

Agha added, “The Water and Environment Quality Authority is studying the beach’s condition, assessing the extent of the risk and submitting it to the relevant authorities. A government committee run by Hamas was formed [in 2020], and it has already installed large concrete cubes and blocks to stave off the waves and prevent erosion. But this method does not really prevent erosion because it has limited capabilities, and solving the problem requires engineering solutions. What is needed is the construction of breakwaters parallel to the shore and not perpendicular to it, but these breakwaters need large funding.”

He said, “Besides, the equipment available in Gaza cannot reach 100 meters [328 feet] on the beach, as Israel prevents the entry of large vehicles into the Gaza Strip. The government committee headed by the Ministry of Public Works and Housing and the Water and Environment Quality Authority had requested donor countries, such as the European Union, UNRWA and the United Nations Development Program to finance the project with $150 million, but so far there has not been a response.”

Nasser Thabet, an official at the Ministry of Public Works and Housing affiliated with Hamas, told Al-Monitor, “The problem of beach erosion has worsened due to climate change and high waves. It is possible that areas near the beach may flood, and tourist or residential areas may be inundated. The high waves led to erosion of the beach, and waves reached the pavements designed for pedestrians. It is expected that there will be road collapses as the wave rise and the tide increase in the sea happen overnight without warning, which leads to horrific damage. It is possible within an hour for hundreds of houses to sink with their residents in them.”

He lamented, “This is a humanitarian problem for Gaza, and the solutions are nonexistent. Our hands are tied because we need [a solution] worth about $150 million. The solutions include transverse breakers in the sea to break the waves before they reach the shore, a retaining wall for high areas to protect residents and roads from flooding or concrete blocks. And these all require a lot of money.”

Thabet said, “The obstacles are plenty, including the siege, the lack of equipment to break the waves and the lack of sufficient financial funding. All the existing solutions are temporary and do not follow the recognized protocols due to lack of capabilities.”

He added, “The Gaza Strip is a marginalized, devastated area. During the annual climate conference, a number of cities at risk were named, but they did not include the Gaza Strip. However, according to our studies and vision, Gaza is one of the areas threatened with flooding, and we call on countries to intervene and to remedy the situation as we expect a terrifying winter this year.”

Yahya al-Sarraj, head of the Union of Gaza Strip Municipalities, told Al-Monitor, “The problem of beach erosion increases the burdens of municipal staff, especially in winter and given climate changes. Municipalities in Gaza are tackling this problem using the equipment they have, but they are very old and dilapidated.”

He said, "There is an urgent need to protect [the beach] by placing huge boulders to counter the waves and mitigate their impact. However, Israel prevents the entry of such boulders to the Gaza Strip, which portends an environmental disaster.”