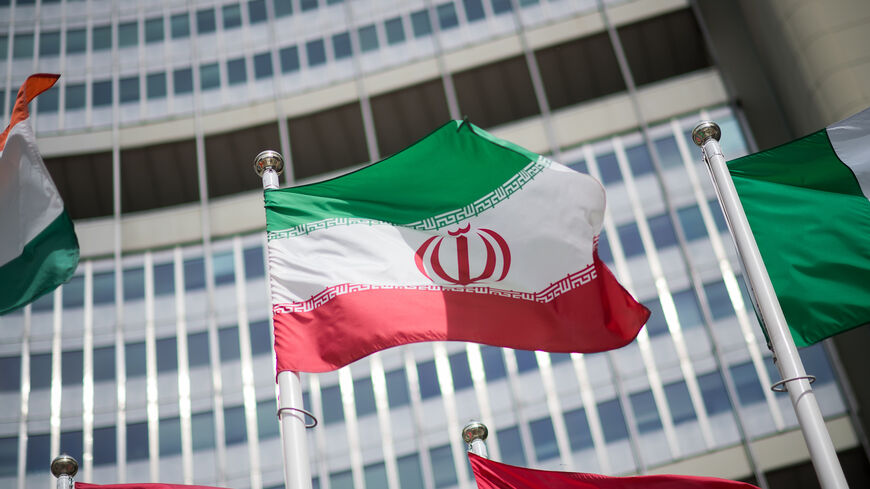 The flag of Iran is seen in front of the building of the International Atomic Energy Agency (IAEA) Headquarters ahead of a press conference by Rafael Grossi, Director General of the IAEA, about the agency's monitoring of Iran's nuclear energy program on May 24, 2021, in Vienna, Austria. - Michael Gruber/Getty Images

Our take: Before signing the nuclear deal, Iran wants the IAEA to end its investigation — just like 2015.

EU presents ‘final text.’ As negotiators inch closer to a renewed nuclear agreement, Iran is seeking the shutdown of a yearslong investigation by the UN’s atomic energy agency into nuclear material found at the country’s undeclared sites.

On Monday, the European Union handed Iran and the United States what it described as a “final text” to revive the Joint Comprehensive Plan of Action (JCPOA) following four days of intense negotiations in Vienna. Both countries have said they will review what’s in the EU proposal and report back.

Iran digs in on IAEA inquiry. Iran has backed off its previous demands that the renewed deal provide guarantees of the JCPOA’s survival past 2024 and that the United States take the IRGC off its formal terrorism blacklist.

As Ali Hashem reported at the start of the Vienna talks last week, Tehran instead wants the UN’s nuclear watchdog, the International Atomic Energy Agency (IAEA), to drop its three-year inquiry into man-made uranium particles found at three of Iran’s old but undisclosed nuclear sites, which potentially violate Iran's longstanding safeguards agreement with the IAEA.

The IAEA said in May that the Iranians hadn’t provided “technically credible” explanations for the uranium, and in June, the agency censured Iran over its failure to cooperate. The Islamic Republic responded by disconnecting some of the IAEA cameras monitoring its nuclear sites.

Iran sees precedent in 2015, when the IAEA ended its long-running probe into whether Iran once operated a secret nuclear weapons program, with what it called a “landmark” resolution clearing the way for implementation of the JCPOA signed five months earlier.

This time around, the Iranians want the IAEA to not only close its current inquiry but make an affirmative statement that the file won’t be reopened again, said Trita Parsi, executive vice president of the Quincy Institute for Responsible Statecraft.

“The Iranians want to make sure, just as they did in 2015, that if they're going to sign the JCPOA and get a clean sheet from the IAEA, then this new investigation has to come to an end,” he said.

Mistrust runs deep. Parsi says Tehran is highly skeptical of IAEA Director General Rafael Grossi, especially following his visit to Israel in June. It was information obtained by Israeli agents in 2018 that led to the IAEA’s uranium discovery.

That mistrust “is causing the Iranians to be less willing to share information and answer questions,” said Parsi. “It's really very difficult for the IAEA to close or be satisfied with this file unless the Iranians cooperate.”

Closing the deal. Diplomats are reportedly discussing a deal that would end the IAEA’s probe in exchange for Iranian cooperation. Citing an unnamed senior Western official, Politico reported that the agency’s 35-member Board of Governors would pass a resolution closing the investigation if Iran provides credible answers on the uranium traces.

“These are questions that quite simply Iran does not want to answer because ​they likely date back to an active nuclear weapons program that Tehran denies ever existed,” said Henry Rome, deputy head of research at the Eurasia Group.

“Iran doesn't want to, at least today, take the steps that would actually resolve the probes. But it also doesn't want them to remain open,” Rome said.

The state of play. The United States says it’s ready to "quickly conclude a deal” based on the EU’s proposals. The Iranians have been less clear. The semi-official Nour News reported Tuesday that Iran "doesn't accept the text as final.”

Noticeably absent from the recent three-day conflict between Israel and the Islamic Jihad was Hamas, the Islamist movement that rules the Gaza Strip. That Hamas stayed on the sidelines prompted Ben Caspit to ask a senior Israeli military source whether Israel and its sworn enemy had reached a sort of de facto truce. “It is not official, but what is happening now between Israel and Hamas is a de facto ‘hudna,’” the source said, using the Arabic word for cease-fire. Describing the Israeli approach as one of “big sticks and sweet carrots,” the source said Jerusalem is planning “more benefits for Hamas, contingent on the situation on the ground.”

Although the fighting in Gaza has stopped, the tumult in the West Bank is ongoing, reports Ahmad Melhem. The Israeli army has arrested several Islamic Jihad members in the West Bank, prompting armed groups affiliated with the movement to declare a state of alert. In an interview with Al-Monitor, Islamic Jihad leader Maher al-Akhras described “an Israeli plan to uproot and prevent the expansion of the Islamic Jihad and its military wing, al-Quds Brigades, in the West Bank.” Most recently, an Israeli raid on Tuesday in the city of Nablus killed three Palestinian militants.

The Gaza Strip’s fast-eroding beaches are threatening tourist destinations and archaeological sites across the impoverished coastal enclave. Most at risk are highly populated areas including the ancient city of al-Balakhia, the al-Shati refugee camp and the beaches in central Gaza. Hadeel Al Gherbawi reports that local Palestinian officials are trying to stop the erosion by using the rubble left behind from the last war with Israel. Old refrigerators, giant blocks of concrete and car tires are also used to harden Gaza’s shores, but as one resident explained, “They are all ineffective, temporary solutions.”

A string of attacks targeting places of worship and a community leader of Turkey’s largest Alevi community has roused fears over a surge in nationalism ahead of next year’s elections, reports Nazlan Ertan. On Monday, President Recep Tayyip Erdogan visited an Alevi temple and broke fast with community members for the first time since he became president. Turkey's largest religious minority has long alleged a lack of protection from the predominantly Sunni government, which does not officially recognize Alevi houses of worship. But with the 2023 elections approaching, Erdogan has been making overtures to the Alevi community.

Russian officials have received training on Iranian military drones in Iran in recent weeks, a US official confirmed to Jared Szuba. The training is believed to be part of a recent agreement between Tehran and Moscow to supply up to several hundred Iranian-made military drones to Russia, likely for use in its war against Ukraine. CNN previously reported that a Russian delegation traveled at least twice to a central Iran airfield to examine a showcase of Iranian Shahed-191 and Shahed-129 drones.

The Bab al-Hawa border crossing in northwest Syria was at the center of a recent UN Security Council debate on cross-border humanitarian aid. But as Joe Snell and Hebaa Shehadeh report, Syrians with hajj permits also use the crossing as part of their pilgrimage to Mecca.