An advisor to Iran's negotiating team said the two sides are "closer than we've been before." 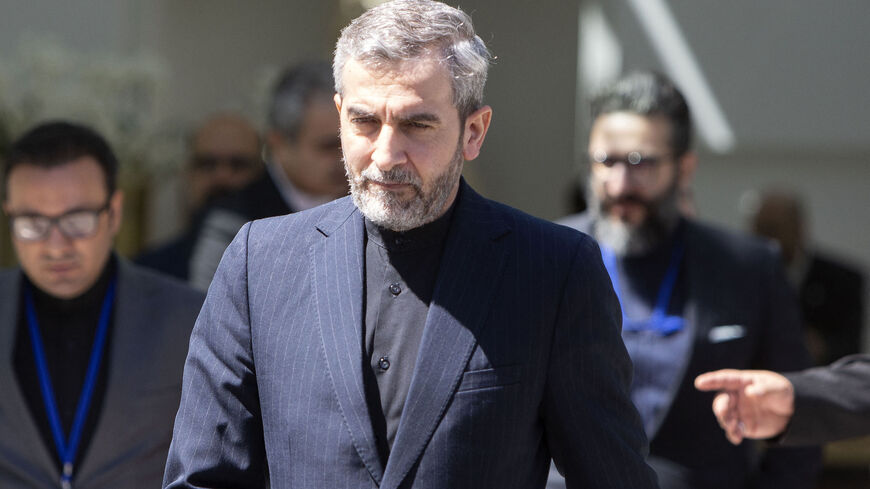 Iran's chief nuclear negotiator Ali Bagheri Kani leaves after talks at the Coburg Palais, the venue of the Joint Comprehensive Plan of Action, in Vienna on Aug. 4, 2022. - ALEX HALADA/AFP via Getty Images)

Iran has provided its views to the European Union on the bloc's latest proposal to salvage the landmark nuclear agreement, a source in the Iranian negotiating team told Al-Monitor.

The EU, which has mediated some 16 months of indirect talks between Washington and Tehran, put forward a “final text” on Aug. 8 to revive the Joint Comprehensive Plan of Action (JCPOA). The Biden administration has said it’s ready to quickly conclude a deal based on the EU's proposed text.

Earlier on Monday, State Department spokesperson Ned Price declined to confirm whether the United States had accepted the final text and said the administration would communicate its views privately to EU foreign policy chief Josep Borrell.

Price also called on Iran to drop “unacceptable demands” that are extraneous to the nuclear deal. If Iran “cannot or will not accept a mutual return to full implementation of the JCPOA, we're equally prepared to continue the vigorous enforcement of our sanctions and the imposition of other diplomatic pressure,” Price said.

He also downplayed expectations that Iran would give a straightforward answer by the EU’s unofficial deadline of Aug. 15.

“I don't want to speculate as to what or how Iran might respond, but I can say that there is a track record here,” Price added.

Iran has suggested that it doesn’t consider Borrell’s draft to be non-negotiable. On Monday, Iranian Foreign Minister Hossein Amir-Abdollahian told reporters that Tehran that the United States needed to show flexibility on several outstanding issues.

“If these three issues are resolved, we can reach an agreement. But failure to revive the pact would not be the end of the world,” he said. “Like Washington, we have our own Plan B if the talks fail.”

Amir-Abdollahian did not specify the three issues, but past sticking points have included Iran’s demand that Washington remove the Islamic Revolutionary Guard Corps (IRGC) from its list of terrorist organizations and provide assurances that a future presidential administration won’t abandon the deal.

The Biden administration has said such a guarantee isn’t legally possible, and Price said the Iranians would need to “alter their underlying conduct” before any sanctions outside the scope of the JCPOA are lifted.

Iran has also sought the closure of an International Atomic Energy Agency investigation into the presence of uranium particles discovered at three of the country’s old but undeclared sites.

The IAEA said in May that the Iranians hadn’t provided “technically credible” explanations for the nuclear material, and the following month, the agency censured Tehran over its failure to cooperate with inspectors.

Mohammad Marandi, an adviser to Iran's nuclear-negotiating team, told Al-Monitor that Tehran shared several concerns with the EU in its response on Monday, but that the remaining issues shouldn’t be difficult to resolve given that over the past 7-8 months “the Iranians were able to get many concessions with respect to several issues, [including] sanctions, guarantees, verification and also preserving the nuclear advances.”

“I can't say that there will be a deal, but we're closer than we've been before,” Marandi said.

The Iranian adviser added there were "flaws" in the 2015 deal that were addressed in prior negotiations. If the IAEA probe is resolved, "it will be a victory for Iran."

Iran's mistrust of the UN agency runs deep. Bijan Ahmadi, executive director at the Institute for Peace & Diplomacy, said decision-makers in Tehran fear an open investigation could later be used against them.

“They are concerned that the open IAEA probe may provide an excuse for the current or future administrations in Washington to reimpose sanctions or withdraw from the deal,” Ahmadi said.

In an interview with PBS NewsHour, US Special Envoy for Iran Rob Malley said the United States would not pressure the UN atomic watchdog to shut down its probe.

“They will be closed when Iran provides the technically credible answers,” Malley said Friday. “As soon as they do that, and as soon as the agency is satisfied, we will be satisfied, but not before.”