Aerial photos show that Rafah's beaches have lost 12 meters in the last four years, the result of marine construction on the Egyptian side. 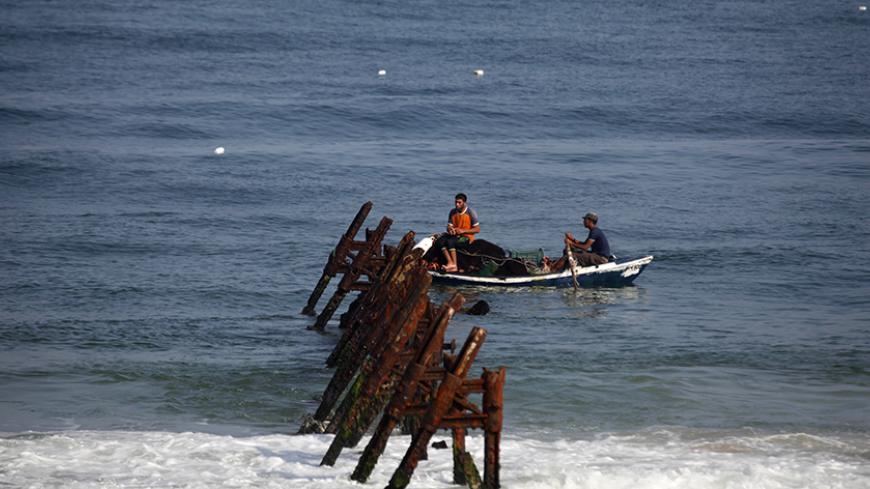 Palestinian fishermen fish from a boat in the Mediterranean Sea off the coast of Rafah in the southern Gaza Strip, near Egypt's territorial waters, Sept. 15, 2013. - REUTERS/Ibraheem Abu Mustafa

RAFAH, Gaza Strip — Rafah’s municipality used aerial photos of the city’s coast from Google Earth to show the erosion of more than 12 meters (39 feet) of its coast as of 2014, the result of Egypt's construction of a groin on the Egyptian side of Rafah in 2010.

The director of the Health and Environment Department for Rafah municipality, Usama Abu Nokira, told Al-Monitor, “A groin is a curved marine structure on the shoreline or a deep coastal outlet. It may be natural or artificial and protects a port or a shoreline from erosion. However, it has several negative consequences, as it increases beach erosion [elsewhere] and causes water advances toward residential areas.”

Abu Nokira said, “The groin was constructed by Egypt 1,900 meters [1.2 miles] into the Egyptian border, and it extends about 300 meters into the sea. Sandy sediments have accumulated to the south of this groin, which led to severe erosion of the coast of the Palestinian town of Rafah. The seawater advanced deep into the residential area, and if we compare the aerial photos from before the establishment of the groin and after its establishment between 2010 and 2014, it shows that Rafah’s shoreline has been bitten off by 12 meters, which means its area decreased from 66 meters to 54. This is a frightening proportion, and we expect that — according to this corrosion ratio we see in photos — corrosion between 2014 and 2016 will exceed 6 meters.”

According to Abu Nokira, Rafah’s coastline will be fully eroded as it is carved away and advancing seawater will submerge the residents’ homes in the next 10 years. He indicated that there was no communication between the municipality or any other governmental entity and the Egyptian side to cooperate on mitigating the effect of its groin.

The director-general of the Environment Protection Department of Gaza's Environment Quality Authority, Bahaa al-Agha, told Al-Monitor, “The negative effects of the Egyptian artificial groin decrease as we head north along the shores of the Gaza Strip,” noting that the disastrous effects are worst felt in the coast of Rafah city.

Agha said, "There is one sewage treatment plant in the southwest of Rafah that has been discharging sewage directly into the sea through a pipeline on Rafah’s coast. Two years ago, we noticed the plant pipe was discharging sewage [deep] into the sea and not on the coast, which has been severely eroded as a result of the Egyptian artificial groin.”

He added, “The negative effects and erosion extend over 6 kilometers, which is almost equivalent to Rafah’s part of the Gaza Strip coast.”

Egypt seems to be disregarding international conventions that require communication and coordination between countries that share bodies of water and call for controlling pollution and the destruction of the marine environment. These agreements include the Barcelona Convention for the Protection of the Marine Environment and the Coastal Region of the Mediterranean, which Egypt has signed.

Ahmed Hilles, the director of the Environmental Awareness Department in the Ministry of Environment Affairs, told Al-Monitor, “Environmental conventions explicitly indicate that environmental pollution is a transboundary problem. It is inconceivable to build a plant on one of our border regions and assume that its generated pollutants will not affect us. This would be illogical. We will be inevitably affected by this pollution, just like our neighboring countries. [International] seas conventions and conventions on coast and bays restrict, regulate and govern the activity of any state with respect to any aquatic ecosystem subject to the rights of the state-members sharing these ecosystems.”

On the ongoing erosion, Hilles said, “The coastal erosion will continue in the areas along the sea in Rafah … as the area facing the Mediterranean in the Gaza Strip is formed of sedimentary or sandy rocks that are eroded very quickly. These are not igneous rocks that protect the land from seawater advances toward residential areas.”

He pointed out that this problem has two possible solutions, saying, “The first is to remove the artificial groin — and this is in the hands of the Egyptian side — while the second solution is to compensate for the eroded part using cement and other hard materials, which is a very expensive solution that the Rafah municipality cannot afford.”

In the absence of communication between the Palestinian authorities and the Egyptians, concerns about the fate of the Rafah shore are not likely to subside. The Palestinian shoreline could completely disappear in the next 10 years, changing Rafah’s map forever.