Lengthy power cuts in the Gaza Strip have prevented water treatment plants from keeping up with the area's increasing volume of wastewater, but a new agreement with Israel holds promise as a solution. 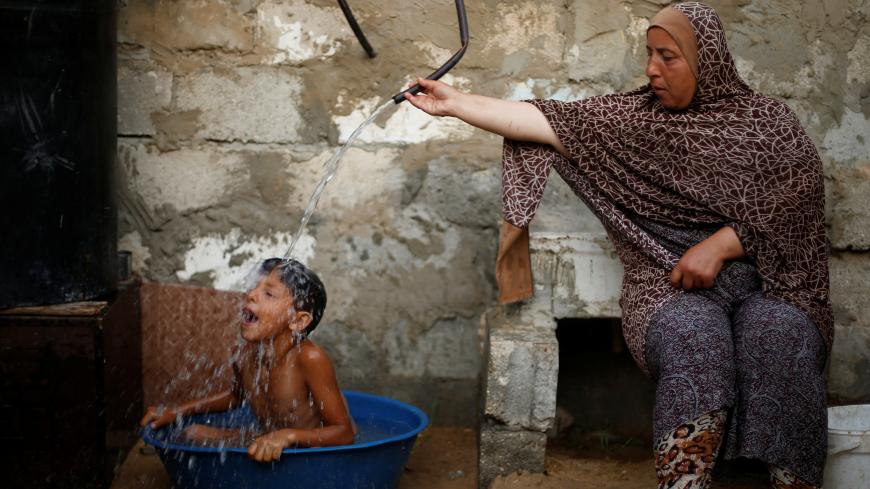 GAZA CITY, Gaza Strip — The Palestinian Water Authority announced Dec. 11 that the new Beit Lahia wastewater treatment plant in the northern Gaza Strip will treat up to 35,000 cubic meters per day. In an agreement with the Palestinian Energy Authority and the Gaza Electricity Distribution Company, the plant will be provided with 6 megawatts of electricity to operate. Israel allowed the entry of the equipment needed to construct the plant in November, and it said it would supply the plant with a power line that will be active 24/7.

Gaza is suffering from a wastewater crisis due to power outages that exceed 20 hours a day. The existing treatment plants have not grown with the increase in demographics. Though new plants have been needed, Israel previously prevented the entry of the necessary construction materials over fears the Palestinian resistance would use them to manufacture weapons. Wastewater had reached the Israeli beaches near the northern Gaza Strip in the summer of 2017, pushing the Israeli government to warn its citizens against using them.

Two more stations are under construction and due to open at the end of 2019. The donor institutions had coordinated with the Israeli side to build them in 2008, but the Coastal Municipalities Water Utility (CMWU) refused to discuss it.

Shadi al-Bassiouni, the head of the Department of Water and Sanitation at the Municipality of Beit Lahia, told Al-Monitor that the Beit Lahia station is only awaiting its agreed-upon electricity supply to begin service to 350,000 northern Gaza residents. He said the wastewater crisis worsened this year as power outages prevented the plant from treating wastewater, which ran to the sea and into ponds.

Bassiouni explained that some of the treated water will eventually be used for irrigation. The first irrigation networks are currently under construction and will one day irrigate about 5,000 acres, helping hundreds of farmers in the northern Gaza Strip.

Munther Shiblaq, director general of the CMWU, told Al-Monitor, “Of the wastewater in the northern Gaza Strip, 26% ends up in cesspits. The delay in the construction of the Beit Lahia plant has caused a health and environmental disaster, as these cesspits are scattered around residential areas.”

He stressed that since 2000, the CMWU has been planning the construction of strategic treatment plants to keep pace with the demographic increase and use the treated water to irrigate crops. However, the Israeli obstacles, political conditions and reduced aid prevented their construction. The CMWU expanded the capacity of existing stations as a temporary solution, but the electricity crisis exacerbated the problem by preventing the stations from operating.

Shiblaq pointed out that three central wastewater treatment plants were supposed to be established. The one in the north of the Gaza Strip has been completed. Another being built in the east of al-Bureij governorate will treat the wastewater of the governorates of Gaza and Deir el-Balah, and a third in the east of Khan Yunis will serve the southern governorates and part of the central governorates.

He said that construction for the two stations to begin their first phase of operations is expected to be completed in 2019. The second stage, an expansion, will be completed in 2022, and the currently operating stations can be closed in 2025.

Shiblaq pointed out that the new stations will operate on three energy sources: electricity, solar power and methane gas resulting from the treatment itself. He added that it should take about three to six months for methane to be produced. The gas, he said, will then be used to operate the station, and the surplus can be sold to the power company.

Shiblaq said that in the first phase, the stations will treat up to 150,000 cubic meters of water on a daily basis, and explained that this amount exceeds the needs of the agricultural sector in Gaza, which means that some of the treated water will be channeled to the sea, where it will not affect the fisheries or the people wishing to swim there. He said that the plants' efficiency will naturally depend on the electricity supply.

Shiblaq said that the problem of wastewater increases in the winter due to rainfall. He called for a quick solution to the electricity crisis.

Attiya al-Barash, the director of the public health department and the environmental laboratory at the Environmental Quality Authority, told Al-Monitor that 110,000 cubic meters of untreated sewage ends up in the sea, the only available outlet, on a daily basis.

He explained that the role of his organization is to monitor, collect and examine seawater samples and issue maps showing citizens where the contamination is highest. He added, “The authority is cooperating with the concerned parties to find a solution to the crisis of wastewater, as more than 73% of the seawater along the Gazan coast was contaminated last July, which negatively affected the 2017 summer season. Only 23% of the seawater was contaminated before 2014.