US project aims to improve water access for Palestinian farmers

The US consulate in Jerusalem launched a $10 million water project to increase Palestinian farmers' access to treated irrigation water. 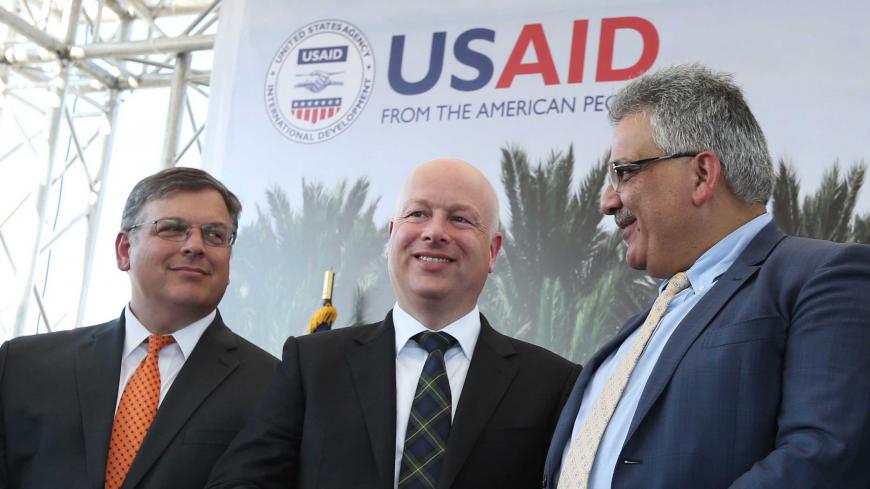 RAMALLAH, West Bank — The US Consulate in Jerusalem launched a $10 million project on Oct. 15 to support the water sector in the West Bank governorate of Jericho. In attendance during the announcement of the launch was Jason Greenblatt, US President Donald Trump’s special envoy to the Israeli-Palestinian peace process.

The project will expand the network of pipelines that flow into the wastewater treatment plant in Jericho, connecting 10,000 new residents to the network, which was funded in 2016 by the United States Agency for International Development (USAID). This means that the new project (network expansion), which should be ready by early 2018, will connect 70% of the residents of Jericho to the water treatment plant, which, in turn, was funded by the Japanese government in the city and launched by Prime Minister Rami Hamdallah in June 2014.

The project will be of great help to the farmers in the city of Jericho and the Jordan Valley, especially palm farmers, as it will increase their irrigation resources, which is the biggest problem plaguing this sector.

Water scarcity is the main problem faced by palm farmers in Jericho, as Israeli authorities control the water resources in Jericho and the Jordan Valley, which are in Area C, and prevent Palestinians from digging new water wells.

In this vein, Clayton Alderman, the spokesperson and media attache for the US Consulate General in Jerusalem, told Al-Monitor, “This project improves wastewater collection services to Jericho households by connecting them to the city sewage network, which feeds the wastewater treatment plant constructed by the Japanese government. The treated wastewater is then recycled for agriculture irrigation, which contributes to economic growth. The US government invests in water and wastewater infrastructure to improve the daily lives of Palestinians and enhance the prospects for lasting peace.”

“While the project aims to connect 10,000 additional residents to the plant, it also provides a safe way to dispose of wastewater so as not to harm the health of the Jericho residents,” Alderman added.

Asked about the significance of the project for the agricultural sector, Alderman said, “Water is very scarce in the arid Jordan Valley. Also, the high salinity of the soil makes groundwater unsuitable for irrigation in that area. In other words, the project addresses these challenges by providing a sustainable source of irrigation for farmers in Jericho.”

He added, “Greenblatt confirmed that a key element in the peace process is a prosperous economy. Also, there is a need for real opportunities for Palestinians across the West Bank and Gaza, so this project is a step in that direction.”

The US government project was established in cooperation with the Japanese government, which financed the construction of a sewage treatment plant through the Japanese International Cooperation Agency (JICA). JICA started constructing the plant in 2011 and inaugurated it in 2014, and the US government has been gradually establishing a network of water pipelines, most recently on Oct. 15.

Abdel Nasser Makki, the head of the sewage and waste disposal department at JICA, told Al-Monitor, “The idea of building a sewage treatment plant started in 2011 in a bid to get rid of the cesspits scattered in the city and ward off the threat they pose to the environment and the health of the Jericho residents — $32 million has been earmarked for the construction of the plant and the network of main water transport lines in the area.”

“In 2012, we launched a new phase of the project worth $6 million to raise the efficiency of the municipality of Jericho when it comes to dealing with the station. We also wanted to teach the human cadres in the municipality how to deal with the station and the main lines, and how to connect them to the houses — especially considering that the municipality lacked a wastewater department that could provide specialized employees,” Makki added.

The station gets wastewater through a network. It then treats it so it is suitable for irrigation and transfers it to a large basin to be subsequently sent to palm growers in Jericho via a huge electric pump. This takes place under the supervision of the Jericho municipality, being the competent authority.

Head of the Jericho municipality Salem Gharouf told Al-Monitor, “The importance of the project lies in its ability to provide water to encourage the expansion of agricultural lands — especially as farmers have been suffering from water scarcity.”

Gharouf said that 10 palm growers in Jericho were currently benefiting from the station’s treated water, but once the US project is completed, more than 50 farmers will benefit in light of the increasing lands planted with palm trees. These are estimated at 5,000 dunums (5 square kilometers).

Asked about the station’s ability to satisfy the increasing demand for water, Gharouf said, “The plant is currently pumping about 900 cubic meters per day, which is not enough amid the increasing demand for water. But we expect this level to increase once the project is completed so that farmers can take advantage of the station’s water pump, which is only operating at 10% capacity.”

Amid this increasing need for additional water resources to irrigate trees and expand farms, palm growers in Jericho are hoping that the new project will meet some of their needs until they are able to benefit from the Palestinian water resources that are controlled by Israel in the Jordan Valley.