Gaza beaches safe for swimming after many years of warnings

Many of Gaza beaches, some of the besieged enclave's only recreational options, are safe for swimmers following a series of projects to clean up the sea. 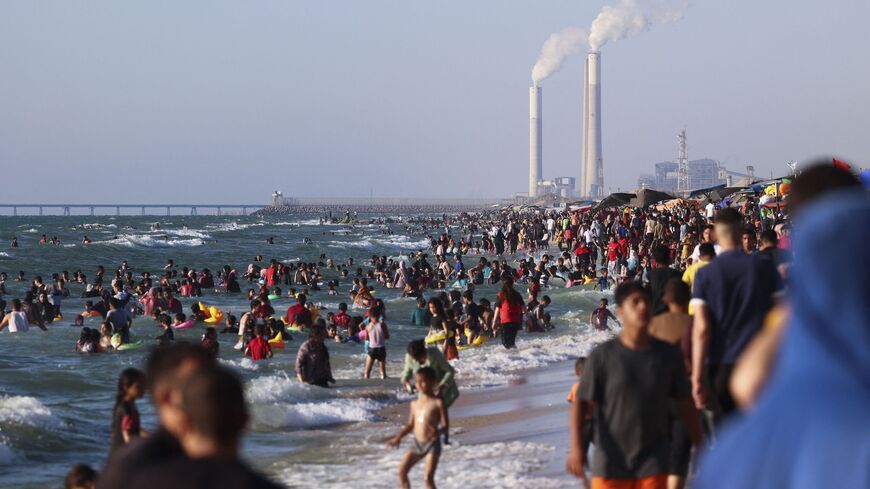 Palestinians swim in the Mediterranean Sea off a beach in Beit Lahia in the northern Gaza Strip as students start their summer vacation on June 10, 2022. - MOHAMMED ABED/AFP via Getty Images

For many years, local municipalities have warned Gaza's beachgoers against swimming in the ocean due to the pollution from wastewater being dumped directly to the sea without treatment due to long hours of power cuts.

However, on May 29, the Water and Environment Quality Authority announced that currently, 65% of Gaza's beaches are safe for swimmers. It said it has teams monitoring the water quality in coordination with the Health Ministry, the Ministry of Local Government and the Coastal Municipalities Water Utility.

Amid dire economic conditions, restrictions on movement and soaring unemployment rates, the beach is one of the only outlets for thousands of Gazans to unwind. For the first time in many years, Gazan beachgoers will be able to enjoy it without seeing the red flags that so often warn them away from the water.

Dalia Mushtaha, who was sitting with her children on the beach, told Al-Monitor, “The sea is so beautiful this season. The water is crystal blue and clean. I have never seen it this wonderful before. The beach is the only place we can go to spend the summer, with the high temperatures and ongoing power outages.”

“I was delighted to learn that the beach was safe for swimming this year. For the past three years, my children couldn’t go swimming because of the coronavirus, then the war on Gaza [in May 2021] and the pollution it caused to the sea. We were also unable to go to the chalets and tourist places, with such exorbitant prices. This year is different. My children are happily enjoying the water without worry of contracting a skin disease,” she added.

Omar Shatat, deputy executive director of the Coastal Municipalities Water Utility, told Al-Monitor, “The seawater and beaches of the Gaza Strip are much better this year than previous years, with 65% to 70% of the swimming sites being safe for beachgoers and snorkelers.”

He added, “This is due to several reasons. Most notably, the waste treatment plants are now provided with uninterrupted electricity. There are also projects funded by international organizations that aim to treat millions of cubic meters of wastewater in accordance with international standards. No wastewater will be channeled to the sea without being processed and tested.”

Shatat explained, “This year, we established the Khan Yunis plant project with Kuwaiti and Japanese funding, serving the Khan Yunis governorate, with a treatment capacity of 26,600 cubic meters of wastewater. There is also the German-funded al-Bureij plan, which serves the Central Gaza and Gaza governorates, treating 60,000 cubic meters of water waste per day. This project is also linked to the Wadi Gaza project and the newly established nature reserve.”

“The main obstacles that used to face the pumping stations were the ongoing power outages due to the electricity crisis that began in mid-2006 after the Israeli occupation forces bombed the only power plant in Gaza. This caused the stations to stop pumping wastewater, which was flowing into the sea untreated,” he added.

Shatat explained that in contrast with sewage, other sea pollutants such as fish farms are more manageable.

“The ongoing Israeli wars and the coronavirus pandemic impeded the arrival of many foreign delegations, which led to the suspension of several international projects such as the Bureij station project, which took six years to be developed,” he added.

Muhmmad Musleh, the director of the Environmental Resources Department at the Water and Environment Quality Authority, told Al-Monitor, “Following the last Israeli military aggression on Gaza, we began to exert great pressure and coordinate among the concerned institutions, such as the Ministry of the Local Government and Municipalities, the Health Ministry and the Coastal Municipalities Water Utility to try to clean up the sea so it would be safe for swimmers.”

“We analyzed a sample and found that several environmental pollutants were polluting the sea,,” he added.

Musleh went on, “We also carried out a microbiological analysis to check contamination levels in the polluted hotspots in all the governorates of the Gaza Strip. We found that sewage is the main pollutant of the sea. We worked to reduce pollution by 65%. We are still studying and analyzing samples in coordination with the Health Ministry and continue to issue maps and the results of the ongoing studies.”

The Gaza Strip suffers from a major water crisis due to the inadequacy of water treatment systems to support its population of 2.3 million people. A Euro-Mediterranean Human Rights Monitor report indicated that 97% of the coastal enclave’s water is unfit for drinking and that groundwater sources are unsustainable and polluted.