Egypt is working on establishing dams, artificial lakes and reservoirs to counter the torrential rains in South Sinai. 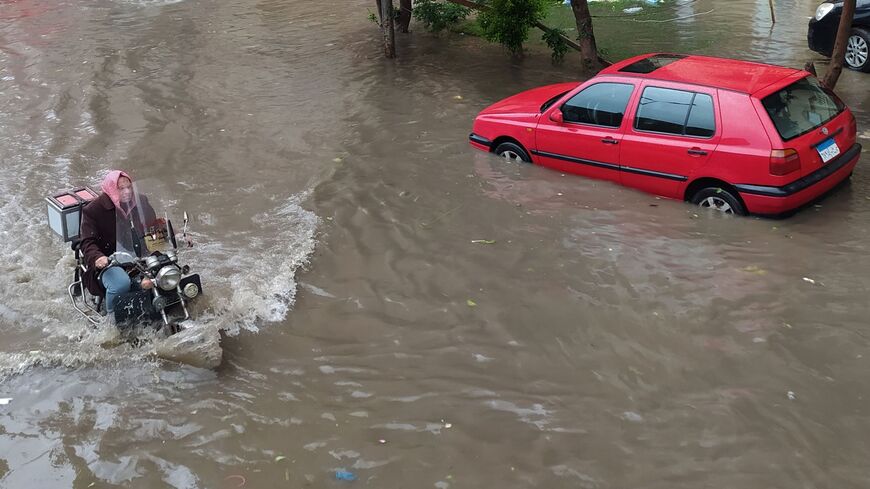 A man makes his way through a flooded street due to heavy rain in the Egyptian coastal city of Alexandria on Nov. 20, 2020. - TAREK AL-FARAMAWI/AFP via Getty Images

CAIRO — South Sinai is building water management projects to both protect the governorate from torrential rains and harness them for beneficial use.

Governor Khaled Fouda said that 44 dams and 229 artificial lakes have been established, along with 16 barriers, 15 reservoirs and five solar energy projects at a cost of 436.477 million Egyptian pounds (about $27.7 million). The projects will protect the Al Muzaina area, the Dahab Road, the Nuweiba sea port, Taba and Sharm El Sheikh, among others.

Following torrential rains in South Sinai, the governorate lifted the state of emergency on Dec. 19 amid full coordination with the heads of cities and neighborhoods to follow up on the conditions of torrent spillways. Meanwhile, heavy equipment was distributed to the locations of the torrents.

In his statement, Fouda announced that the governorate completed three projects at a cost of 500 million pounds about $31.7 million to shield the cities of Taba, Al-Tur and Nuweiba from torrential rains.

Former Egyptian Minister of Irrigation Mohamed Nasr Eldin Allam told Al-Monitor that the new facilities follow the plan set by the state years ago. He said that every year, the Ministry of Irrigation chooses the places at greatest risk of flooding for construction of dams, reservoirs and lakes.

“South Sinai is of major importance, as it is a tourist area with billions of investments in the tourism sector," Allam said. "Consequently, the state is widely interested in protecting such facilities from the dangers of floods. … I remember when I was Minister of Irrigation, we rolled out several projects both in the Arish area in North Sinai and in Upper Egypt.”

The Egyptian government has completed the first phase of the flood control, including 633 facilities with a storage capacity of 266.34 million cubic meters. The facilities consist of 160 dams, 307 artificial lakes, 39 protection bridges, 93 barriers, artificial canals, and 34 flood passages spread across Egypt.

The risks of flooding have risen in recent years, Allam said, due in part to illegal buildings on drains and neglected maintenance work on spillways.

MP for South Sinai Governorate Mohamed Attia praised the governmental efforts aimed at reducing the risks of torrential rains. In the past, he said, "South Sinai witnessed the destruction of infrastructure while some residential areas, hundreds of desert agricultural acres and tourist facilities, among others, were damaged.”

Attia told Al-Monitor, “Now, following the government’s efforts, many of these projects and facilities have become safe. … However such efforts only mitigate the risk, and they do not eliminate it because no one can predict the size or timing of torrents.”

Abbas Sharaki, professor of geology and water resources at Cairo University, told Al-Monitor, “Given the presence of large flood-threatened areas in Egypt, it is difficult to launch projects aimed at simultaneously confronting flood risks across the Republic. Therefore, the places are determined according to their importance and the degree of seriousness of their floods."

He also stressed that South Sinai is one of the governorates most exposed to torrential rains, and its cities are close to the mountains. The torrents there pose a great danger as they fall from the highest mountains to the cities, and consequently cause heavy losses. However, the low number of residents in South Sinai helps reduce the death toll in the event of heavy torrents.

He expressed his happiness with the announcement of the inauguration of dams and lakes in the governorate.

He continued, “The torrential waters in South Sinai and Mersa Matruh are used to replenish the groundwater from which residents drink. Also, some tribes there dig wells to store that water and use it for drinking and irrigating light crops not requiring much water, such as olives and figs, and the percentage of rainfall and torrential rain in Egypt is very low compared to rainy countries such as Ethiopia and Sudan. Colombia is the rainiest country in the world while Egypt is the driest country in the world."