The Egyptian government, the UN Development Programme and the Global Environment Facility are aiming to transform Sharm el-Sheikh into a green city in the lead-up to the international climate conference in November. 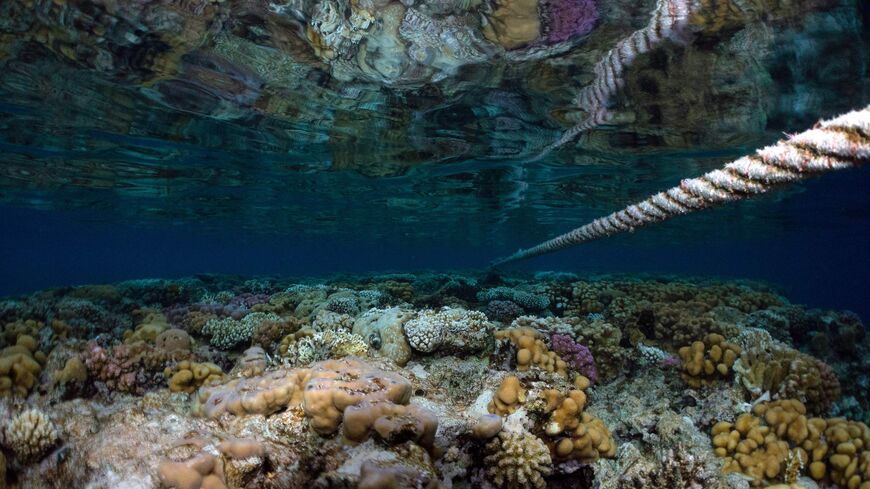 This picture taken on Sept. 4, 2018, shows an anchor attached to a coral reef off the coast of the Egyptian Red Sea resort city of Sharm el-Sheikh in the southern Sinai peninsula. - EMILY IRVING-SWIFT/AFP via Getty Images

CAIRO — Sharm el-Sheikh, a resort city on the Red Sea coast, will be transformed into a sustainable green city before it hosts the UN Climate Change Conference (COP27) in November, with the help of a $7 million grant from the Global Environment Facility (GEF).

Fouad explained that Sharm el-Sheikh has implemented eco-friendly initiatives over the past few months, including switching to electric for its transportation network and developing eco-friendly hotels. Also, under the ministry's sustainable practices initiative, hotel employees were trained in environmental policies, restaurants and cafeterias were incorporated with sustainability standards, and dive centers that abided by environmental practices were rewarded with the Green Star.

During the launch of the Green Sharm Project, the UNDP stated that it will work to increase clean energy as part of the National Project for Solar Cell Systems (Egypt-PV), phase out plastic single-use items, improve protected areas, ensure solid waste management and conserve biodiversity.

Approximately 350 species of coral reefs live in the Red Sea, making it “one of the most sensitive biodiversity hubs remaining globally,” according to the UNDP.  Last year, the International Organization launched a campaign to protect the sea environment and minimize human pressure on coastal reefs, which are seriously damaged as a result of unsustainable diving practices.

Magdi Allam, former deputy environment minister and head of the Egyptian Federation of Civil Associations and Institutions for Climate, told Al-Monitor that Egypt is also planning to plant 10,000 acres of mangroves along Red Sea coastlines. This plant is frequently described as a “nature-based solution” for easing the effects of climate change.

“Mangrove forests will act as a protective habitat for marine life, and Egypt will present this project at COP27 as part of its efforts to preserve biodiversity, protect nature and adapt to climate change,” he said.

Egypt also widened Sham el-Sheikh's Peace Park and added green spaces to its districts as part of its preparations to make the city an ideal climate conference venue. “Before the conference, a solar energy lighting system will be installed in the city's streets, single-use plastic bags will be banned, and any smokestacks inside the city will be moved outside to the desert area,” Allam added.

He pointed out that hotels and tourism companies in the city will invest in green projects as well in advance of the conference, while the $7 million from the GEF will be allocated for programs that the state will undertake on its own.

On June 8, Egypt's Foreign Minister Sameh Shoukry and UN climate executive secretary Patricia Espinosa signed the COP27 Host Country Agreement, which outlines Egypt's responsibilities as a host country. Shoukry told AP on May 24 that environmentalists will be allowed to demonstrate during the conference, despite Egyptian laws that restrict public protests.

As well, many Egyptian efforts were underway in May to prepare for the conference and respond to criticism over the country's use of fossil fuels. Egypt's Petroleum Minister Tarek el-Molla announced deals worth more than $1 billion for green petrochemical projects, as the country continues to undertake environmentally friendly initiatives to reduce greenhouse gas emissions before the conference.

“More than 35,000 visitors are expected to arrive at Sharm el-Sheikh, including heads of state, delegations, and representatives of major companies and civil society organizations. … Egypt wants to show the world a green city from entry to exit,” Allam said.

During COP27, Egypt intends to boost tourism, which has been severely affected by the Ukrainian-Russian war. Most of the country's current tourism-attraction projects have focused on the region surrounding Sharm el-Sheikh in South Sinai. One of these is The Great Transfiguration Site on the Land of Peace project, intended for the development of the city of St. Catherine and Mount Sinai.

The water issue and the Nile dam crisis are new topics Egypt hopes to bring up at COP27. In a previous meeting with the Italian ambassador to Cairo, Michele Quaroni, the environment minister said water issues are becoming increasingly important.

During her announcement of the Sharm Green City plan, the minister mentioned that the initiative would be replicated in other Egyptian cities, but she did not specify which ones.

Even though Cairo is plagued by pollution and criticism is mounting over the cutting down of thousands of trees on its streets just before COP 27, Allam said that new cities around the capital are being built with an eco-friendly design.

"Most of the new urban communities of 6th of October City, New Administrative Capital or even new cities in Upper Egypt are planned to be sustainable buildings. Also, a large percentage of Sheikh Zayed City will be powered by solar energy, and a lot of houses in new cities have solar panels on their rooftops," he added.