Egypt will host the 27th session of the Conference of the Parties to the United Nations Framework Convention on Climate Change in 2022 amid international human rights objections. 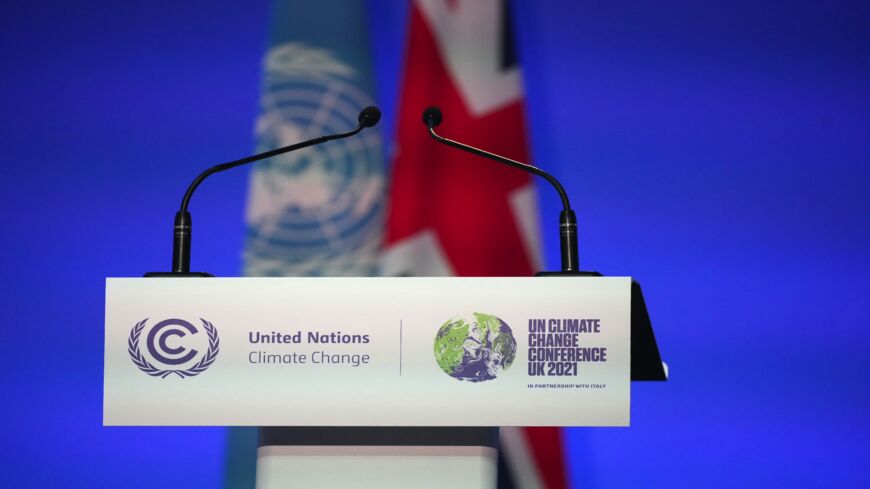 The podium is seen ahead of the start of COP26 on Oct. 31, 2021, in Glasgow, Scotland. - Christopher Furlong/Getty Images

Egypt will host the 27th session of the Conference of the Parties (COP27) to the United Nations Framework Convention on Climate Change (UNFCCC) in 2022, while the United Arab Emirates will receive participants in the COP28 in 2023.

In a statement issued Nov. 11, the Egyptian Ministry of Environment said, “Egypt will officially host the upcoming Conference of Parties to the United Nations Convention on Climate Change (COP27) in Sharm El-Sheikh in 2022.” The selection announcement was made at the Glasgow conference (COP26), currently in session.

The Ministry of Environment praised this as a new chapter of Egypt's climate action leadership in the region, which aims to unite the world's efforts in facing the effects of climate change.

In her speech at the Glasgow conference on behalf of the Egyptian government, Egyptian Minister of Environment Yasmine Fouad thanked all delegations, especially African parties, for endorsing Egypt’s offer to host the next COP. She also called for global efforts to minimize climate change, whose impact affects all countries without any discrimination and requires multilateral, active, dynamic and cooperative action.

Fouad reiterated what President Abdel Fattah al-Sisi said in his speech at the World Leaders Summit on Nov. 1, affirming that COP27 will be a true African conference.

She added, “We hope to make progress in priority areas such as climate financing, adaptation, and loss and damage, to keep pace with the progress that the world hopes to achieve in mitigation and carbon neutrality efforts.”

On the sidelines of her participation in COP26, Fouad launched Egypt’s National Climate Change Strategy 2059, which aims to enable Egypt to plan and manage climate change at various levels and support the achievement of sustainable development goals and the goals of Egypt’s Vision 2030, through a flexible and low-emissions approach that efficiently counters the effects and repercussions of climate change.

Samir Tantawi, director of the climate change project at the United Nations Development Program, believes Egypt was selected as a sign of appreciation by the international community for the efforts exerted by the state in the field of development while preserving the environment.

He explained that the COP board of directors examines the hosting bids, forms a panel of specialists to visit the proposed sites for hosting the conference, and verifies the logistical aspects in the countries such as infrastructure, transportation networks and services. The panel then submits its report to the COP board of directors. The board makes a decision, which it then submits to the COP for approval.

Tantawi added, “In 2018, Egypt hosted the 14th session of the Conference of Parties (COP14) to the United Nations Convention on Biological Diversity, which boosted Egypt's experiences in hosting such international conferences.”

In a phone call to Al-Monitor, Tantawi noted that the Egyptian government has been focusing on the issue of climate change. He said, “The Supreme Committee of the National Council for Climate has been formed, headed by the prime minister with the membership of the relevant ministries. Other bodies were also formed within each of the concerned ministries. This is in addition to the development of energy-generating projects from renewable and clean sources, whether solar, wind or hydro energy.”

On the impact of climate change on Egypt, Saber Othman, climate change expert and former director of the climate change department at the Ministry of Environment, warned that Alexandria faces the risk of being submerged by rising sea levels. “Streets will be flooded but the city will not completely disappear,” he said. “If measures are not taken to reduce emissions or protect the beaches, this would happen by the year 2100.”

Othman indicated that the mega deltas most vulnerable to climate change are the Ganges-Brahmaputra delta in Bangladesh, the Mekong delta in Vietnam and the Nile delta in Egypt.

Jauad El Kharraz, executive director of the Regional Center for Renewable Energy and Energy Efficiency in Cairo, told Al-Monitor by phone that Egypt deserves to host the conference. He said Egypt has exerted huge efforts and is implementing a series of projects in the field of renewable energy, which are part of the climate change adaptation and mitigation measures framework.

“When hosting the conference, I expect Egypt to focus on providing the necessary financial support to African countries in particular and developing countries in general in order to counter and mitigate the effects of climate change,” he said.

Kharraz said that Egypt has a lot of work ahead of it in the coming months after being chosen to host and chair the upcoming climate summit.

“Egypt has to work on four levels in the coming period and build on the outcomes of the Glasgow conference. Egypt has a great deal of work at the global level in terms of implementing the commitments to mitigate harmful emissions, adapting to climate change and managing the transition. Also, the financing issue in this respect is a top priority," he added.

Meanwhile, Human Rights Watch panned the decision to have Egypt host the upcoming climate summit. In a strongly worded statement on Nov. 15, the organization said, “COP27 participating countries should prepare to counter Egypt using its role as COP27 host to whitewash its appalling record of human rights abuses.”

He added, “Countries participating in COP27 should press Egypt to release the thousands of people jailed solely for exercising their right to free speech and peaceful assembly."