Egypt to mobilize investments for climate projects ahead of COP27

The first regional forum organized by the Egyptian presidency of the UNFCCC COP27, among five forums aimed at encouraging investment in climate action, kicked off in Addis Ababa Aug. 2. 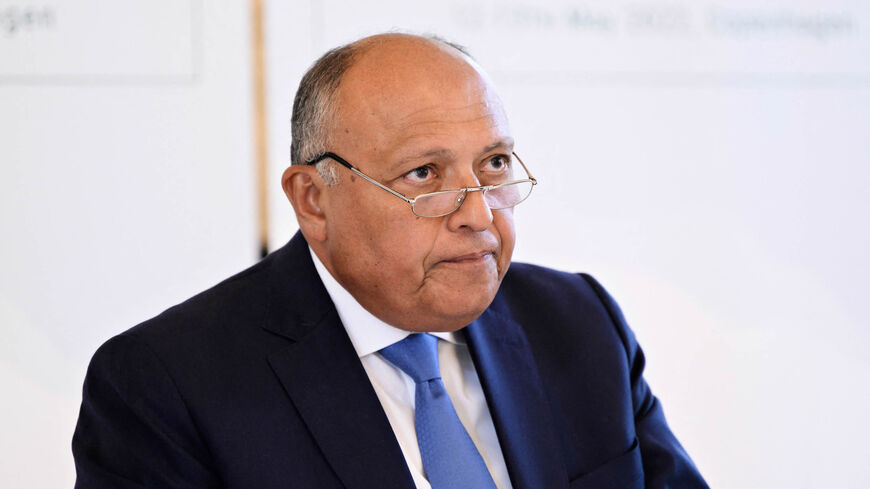 Egyptian Minister of Foreign Affairs and upcoming Chairman of the COP27 Sameh Shoukry is seen at a press conference after the May Ministerial - World Climate Leaders Meeting, Copenhagen, Denmark, May 13, 2022. - Philip Davali/Ritzau Scanpix/AFP via Getty Images

CAIRO — The first regional forum of the Conference of the Parties to the United Nations Framework Convention on Climate Change (UNFCCC COP27), which will be held in Sharm el-Sheikh in November, kicked off Aug. 2 in the Ethiopian capital, Addis Ababa, with the aim of encouraging investments in fields related to climate action.

Egypt’s COP27 presidency, in coordination with the United Nations, is seeking to hold five major regional forums, with the aim of “discussing climate projects and investment opportunities with investors, international financing organizations, development banks and other actors, all the while embarking on the execution of climate action projects,” a July 31 statement said.

The first forum on Africa was held in Addis Ababa, which is the seat of the UN Economic Commission for Africa, on Aug. 2-4, under the title, “Towards COP27: Regional Forums on Climate Initiatives to Finance Climate Action and the SDGs.”

In an Aug. 2 statement, the Egyptian Ministry of Foreign Affairs explained that these five regional forums focus on “providing climate financing and directing investments to support international efforts in the field of climate change, in addition to adopting a comprehensive approach to achieving sustainable development, with a focus on fields of the equitable energy transition, food security and transition to a circular economy, which is an economic system aimed at eliminating waste and focusing on the continuous use of resources.

In his speech at the first forum in Addis Ababa, Sameh Shoukry, minister of foreign affairs and chairman of the COP27 conference, said there is a need for "faster steps capable of confronting climate change, all the while focusing on implementing international commitments and concrete projects in this regard, as well as working to provide the funding required for these projects.

He continued, “The ongoing international challenges require collective action that supports the international agenda in the field of climate change.”

Former Egyptian Minister of Environment Khaled Fahmy told Al-Monitor, “Egypt’s presidency of the COP27 organizes these regional forums with the aim of discussing the financing of climate-related projects in cooperation with the UN in order to examine the potential contribution of the private sector, major companies and institutions in this field, especially considering that investments in projects aimed at addressing climate change is financed up to 80% by the private sector, while the rest is from the government sector."

He said that such forums aim to draw conclusions that can be submitted to the COP27 conference, noting, “Egypt will be the voice of developing countries, especially African countries, during the upcoming climate conference.”

Asked about the extent of Cairo’s ability to mobilize international support for the financing of climate-related projects, Fahmy said, “Egypt is the president of the COP27 conference, but this does not infer that it will be capable of resolving all outstanding issues regarding climate change alone, foremost of which is the issue of financing. But it will work on creating consensus among the countries participating in the upcoming climate conference, which enjoys great international momentum.”

He noted, “The financing of climate projects is one of the most important issues requiring consensus and support from major countries during the upcoming climate conference in order to reduce the negative effects of climate change and emissions, and enhance adaptation to those effects.”

Fahmy added, “Developing countries — especially in Africa — suffer from a financial burden to face climate change, and according to estimates African countries need $1.3 trillion to transition to green energy. But the domestic resources of these countries cannot even cover their basic development needs, hence the difficulty to find the necessary support for the climate issue. Also, resources must be mobilized in order to protect Africa from the dangers of climate change and to enable the continent to work with new and renewable energy instead of fossil fuels.”

UN Climate Change High-Level Champion for Egypt Mahmoud Mohieldin, said in his speech at the opening session of the first forum, “Despite the fact that Africa slightly contributes to the global harmful emissions, it is the continent most affected by the repercussions of climate change.”

In a statement issued in early August, Mohieldin explained that Egypt’s initiative to encourage climate investment aims to discuss investment opportunities in the food and water sectors, develop irrigation systems, increase agricultural productivity, new and renewable energy and related infrastructure, and digital transformation in the management and operation of these sectors.

Richard Munang, deputy regional director of the UN Environment Program Africa Office, told Al-Monitor, "The focus of the COP27 will be on turning pledges made at the COP26 into implementation action in all areas, including climate finance."

He said, "The question that the COP27 will answer will be what needs to be done to operationalize pledges into implementation. Specific to finance, Egypt has already floated some proposals — for example, 'de-risking' finance to attract private sector investors. This could be achieved by the government providing guarantees to private lenders to lower the cost of capital and thus attract more to invest in enterprise actions in the climate action space."

Magdy Allam, consultant to the World Climate Program and secretary-general of the Union of Arab Environmental Experts, told Al-Monitor, “Egypt assumes a great responsibility when it comes to achieving good results in the final decisions issued by the COP27 summit, given its presidency of that summit, foremost of which is achieving commitment to protecting the climate and the environment against greenhouse gasses, and switching to the use of clean energy. This requires a close partnership between major companies and advanced industrial countries.”

He said, “Egypt is seeking to garner international support for investment in climate projects …, but the financing mechanisms need some kind of development. Developed countries pledged at the Copenhagen Conference [in 2009] to provide annual contributions worth about $100 billion per year to poor countries, but there are still many obstacles to directly transferring this funding to the beneficiaries. Chief among these is the failure on the part of some major countries to fulfill this commitment as a result of global economic conditions, not to mention other difficult conditions [which he did not specify] to obtain this funding. This matter needs incentives from the donor parties.”

Asked about the extent of the consensus reached at the COP27 conference, Allam said, “The major countries have become convinced of the need to take quick steps in the field of protecting the globe from climate change, and to take the matter seriously. Otherwise, these changes will seriously harm humans and turn the globe into a tragedy.”