Egypt to focus on water crises at COP27

Egypt plans to discuss during the COP27 the need to include the water issue in the international action related to climate change. 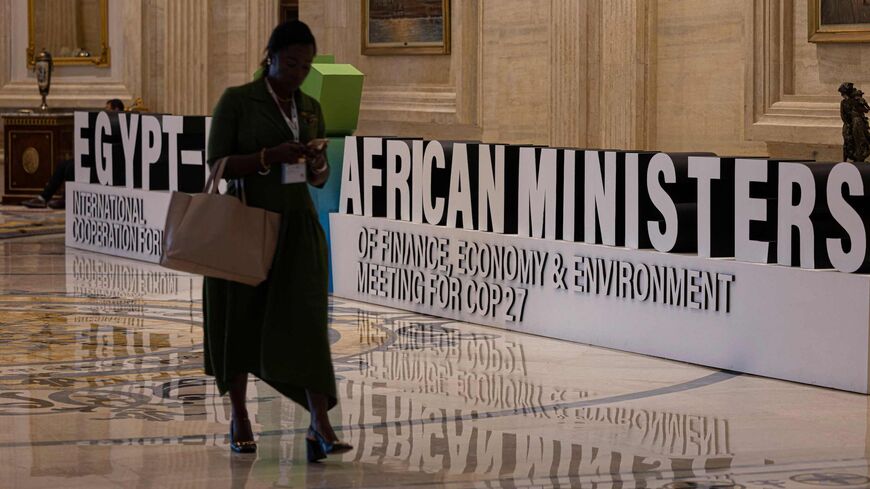 A picture taken on Sept. 7, 2022, shows a guest walking in the lobby of the al-Masa hotel, during an African Ministers of Finance Economy and Environment Meeting for the COP27 climate summit, at the New Administrative Capital, some 45 kilometers east of Cairo. - KHALED DESOUKI/AFP via Getty Images

Egypt is planning to include the water issue among the top items for international climate action during the United Nations Climate Change Conference 2022 (COP27), which it will host in Sharm el-Sheikh in November on behalf of African countries.

The move to include the water issue on the conference’s agenda comes within the framework of Egypt’s policy to adapt and reduce the negative effects of climate change on water resources, especially the Nile waters flowing from outside its border.

“Egypt puts water issues at the top of the climate action agenda in order to come up with recommendations that would speed up measures to adapt and mitigate climate change and provide the necessary funds for these projects,” Egyptian Minister of Water Resources and Irrigation Hani Swailem said in his opening speech at the Environment and Development 2022: The Road to Sharm El-Sheikh COP27 forum held in Cairo on Sept. 11.

“The world is experiencing extreme climatic phenomena that have negatively affected the global water sector, including droughts in Europe and China, frost in Brazil and floods in Saudi Arabia. This requires including water issues in the global climate agenda to enhance the countries’ ability to deal with water issues in a way that achieves water-related sustainable development goals, especially in Africa,” he added.

According to Goal 6 of the water-related Sustainable Development Goals adopted by the United Nations in 2015, “Water scarcity affects more than 40% of the global population and is projected to rise” with the increase in temperatures due to climate change.

“Sustainability cannot be narrowed down to a climate act focusing on the reduction of gas emissions. We must work toward a comprehensive outcome that will be presented at the next summit on five axes, including promoting investments in the energy and water sectors and adapting to climate change, while at the same time leading to the creation of new jobs and alleviating the damage caused by extreme poverty,” Mohieldin said.

As part of the Egyptian government’s efforts to confront climate change and its repercussions, the state has implemented in recent years a number of projects to adapt to water scarcity.

These projects include water treatment and recycling projects, such as the Bahr el-Baqar wastewater treatment plant that irrigates large agricultural lands in north and central Sinai, and Al-Mahsama water reclamation plant east of the Suez Canal.

In addition, several seawater desalination projects have been established to supply coastal cities with water, including a plant in al-Alamein.

On how Egypt would benefit from including water issues on the global climate action agenda, Imad Adly, an expert on environmental issues and sustainable development, told Al-Monitor, “The COP27 will be the first event to include the water issues as a separate axis in the climate action, although climate change has direct repercussions on the water sector, including droughts, floods and sea-level rise.”

He added that Egypt will also work on promoting investment projects in the water sector, especially in the Nile Basin countries, which represent 20% of the African continent.

“Egypt, as a host country [of the COP27], will be in a sensitive position. It will be difficult for it to impose stances and adopt specific policies because being host requires standing at an equal distance from all parties and coming out with maximum benefit to African countries,” Adly said.

He went on to say, “The water-related initiative that is expected to be launched at the COP27 will include basic clauses related to the integrated water resources management, water governance and fair distribution and sustainable use of water. This will be in the interest of the downstream countries’ positions when it comes to international rivers, as they will help them secure their share of the water as part of sustainability and undue consumption by upstream countries.”

Adly continued, “Egypt cannot use the COP27 to issue official statements affirming its rights to the Nile waters, but there can be diplomatic moves [during the conference] through civil society and regional and international organizations working in the water field to emphasize the basic principles of common international rivers, especially sustainability, just distribution and the rights of all parties without any of them taking unilateral measures.”

“Although these are well-known concepts, when it comes to the Nile River water, there is a party that is elusive and who is not recognizing the rights of others,” he said in reference to Ethiopia.

Meanwhile, the Egyptian Ministry of Water Resources and Irrigation is gearing up for Cairo Water Week, which will be held in October under the title "Water at the Heart of the Climate Action.”

During this week, a number of recommendations will be discussed to formulate the water initiative that is expected to be adopted at the COP27.

In conjunction with the Egyptian efforts to mobilize international positions in the water file, especially with regard to international cross-border rivers, the Ethiopian Ministry of Foreign Affairs held a high-level, three-day conference on Sept. 5-7 on the equitable and reasonable use of the Nile River water resources, with the participation of officials and experts from the Nile Basin countries.

The participants at the conference discussed the importance of accelerating the implementation of the legal and institutional framework agreement for the Nile Basin known as the Entebbe Agreement.

Egypt and Sudan had rejected the agreement signed in 2010, claiming it does not recognize their historical rights to the Nile waters and that it opens the door to the reallocation of the water shares among the Nile Basin countries without their approval.

In this context, Khaled Abu Zeid, director of the Egyptian Water Partnership, told Al-Monitor that “there are major challenges related to the joint water resources management in the Nile River Basin, especially in light of the significant impact of climate change. There are waves of drought in countries such as Somalia and Ethiopia, and their impact is close to the Nile Basin.”

Abu Zeid added, “Egypt believes that climate change poses a great danger to its water resources, especially since the main source of fresh water comes from outside its borders because it is the last country in the [Nile] river basin. This is why it is important to look into the impact of climate changes in the upper Nile and the impact of establishing a facility in the upper Nile River that retains water in times of drought.”

He explained that the upstream countries are unlikely to promote the principle of fair and equitable water in the Nile without addressing the just and equitable use of all water resources within the Nile Basin, such as the green water that falls in pastures and forests and the Blue Nile waters in the course of the river.

The efforts adopted by the institutions concerned with the water file at the official and informal levels in Egypt, in cooperation with regional and international organizations and institutions concerned with water, remain an indication of the possibility of formulating international positions that include viable solutions to protect water resources from the potential effects of climate change, especially when it comes to cross-border rivers.