As the Egyptian authorities embark on removing dozens of residential buildings in the historic Sayeda Aisha area as part of a development plan, lawyers are working to provide legal support to residents and owners of the removed properties. 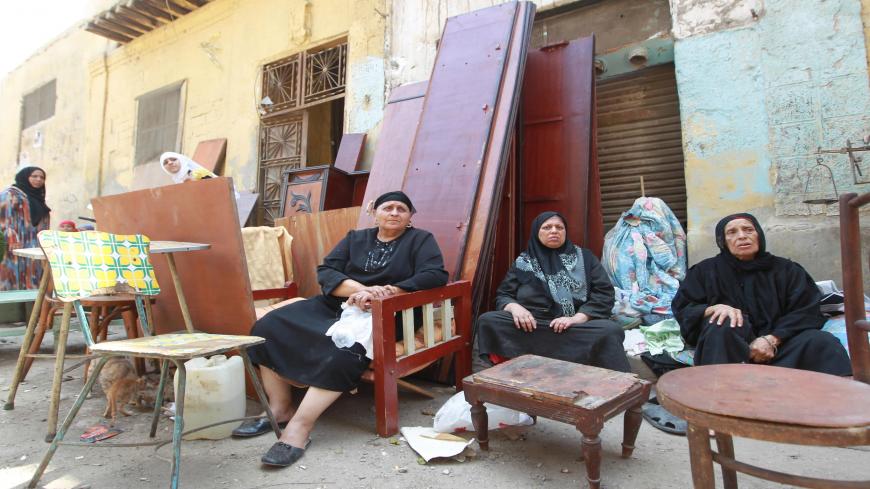 Egyptian women sit in the street with their furniture after they were evacuated from their home in al-Darb el-Ahmar area in historic Islamic Cairo. Several hundred meters away an old building collapsed overnight killing seven people sleeping inside, Egypt, July 14, 2010. - Khaled Desouki/AFP via Getty Images

CAIRO — Amid tight security measures to prevent the outbreak of protests, the Egyptian authorities continue the campaign to remove dozens of residential buildings in the historic Islamic district of Sayeda Aisha in the capital Cairo, which led to the displacement of hundreds of families despite their possession of proof that their houses are legally built.

Mohammed Omran, from the Sayeda Aisha area, woke up Jan. 16 to the sound of tractors demolishing dozens of houses surrounding the historic Sayeda Aisha Mosque on the grounds that these buildings were randomly built and had no official permits.

Omran, who works as a security guard in a private company and earns a salary of 3,600 Egyptian pounds (about $230) per month, told Al-Monitor, “They [destroyed] our houses and told us that they were illegal despite the fact that we have been living there for more than 50 years and benefit from services offered by the government itself, such as electricity and water.”

He said, “More than 500 families have been affected, and some cannot afford to pay rent in any other region due to the high prices [of housing]. We conveyed all these problems to the officials and expressed our rejection of such practices, but [no one heeded our demands]."

Omran noted that the government “has housed only a small number of families [whose homes were demolished]. Many others were left without any compensation or alternative housing. When we asked about the matter, they [officials] said that we will be contacted later to discuss compensation, but no one has reached out to us yet.”

Jihan Abdel Moneim, deputy governor of Cairo, told Al-Monitor that the government’s decision to remove buildings in this historic area is “legal,” as the residents of this area do not possess official papers and their houses were randomly established.

Abdel Moneim defended the government’s decision, saying, “The demolition process included only random buildings, and it aims at providing suitable housing for citizens instead of having them live in unsuitable areas, as part of a large development plan approved by the government with the participation of the armed forces to develop Historic Cairo and all residential areas there.”

On Dec. 22, 2020, Prime Minister Mustafa Madbouly announced that he was tasked by President Abdel Fattah al-Sisi to coordinate with the Egyptian Armed Forces Engineering Authority and set up a project to develop Historic Cairo, remove old buildings in the area and rehouse citizens in alternative places.

According to the plan for the development of Historic Cairo, the displaced residents are compensated either by being granted alternative housing, the cost of the apartments from which they were displaced or the cost of monthly rent to reside in other residential places.

An Egyptian human rights lawyer working on the issue of the right to housing told Al-Monitor on condition of anonymity, “A number of lawyers interested in this issue will reach out to families who have been displaced to provide legal support and file cases against the demolition decisions.”

He noted, “The Egyptian authorities have a long record of displacement and arbitrary removal of real estate. The same happened in el-Warraq and Nazlat el-Samman areas overlooking the Pyramids, and before that in the Maspero Triangle area in the heart of the capital Cairo. The citizens’ demands and concerns over residing in faraway residential areas or being deprived of their right to the place in which they live are never heeded."

The lawyer added, “Despite the fact that in most cases residents possess the required legal papers, they are afraid to take legal measures for fear of security prosecutions, especially since the authorities arrest citizens from the opposition, accuse them of terrorism and imprison them for many years.”

Article 63 of the 2014 Egyptian Constitution states that “all forms of arbitrary forced migration of citizens are forbidden. Violations are a crime without a statute of limitations.”