Egyptian President Abdel Fattah al-Sisi approved new amendments to the emergency law, granting the army the right to arrest and prosecute civilians in clear violation of the constitution and the law, according to human rights activists. 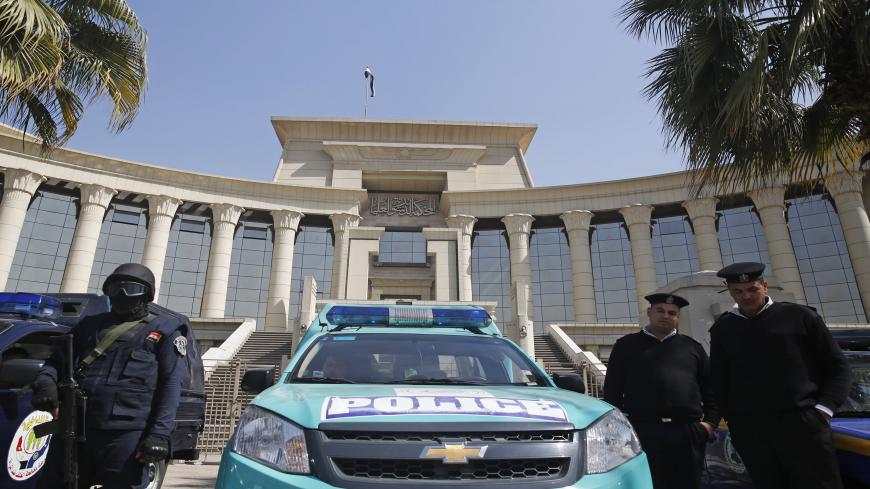 Members of the special forces police stand guard in front of the Supreme Constitutional Court during a court session to determine if the House of Representatives parliamentary election law is constitutional, Cairo, March 1, 2015. - REUTERS/Amr Abdallah Dalsh

CAIRO — Egyptian President Abdel Fattah al-Sisi has ratified amendments to the country’s Emergency Law, granting the armed forces the power of judicial oversight across all governorates, which means the army now has the right to arrest and investigate with citizens before the military prosecution — powers previously limited to the country’s law enforcement officers (security forces) and the public prosecution.

The amendments, which were published in the Official Gazette May 7, also expanded Sisi’s prerogatives, including more decision-making powers such as suspending classes at schools and universities, postponing tax payments and amending official working hours across the country during the state of emergency.

Article 4 of the amended Emergency Law specifies that security or military forces will enforce the orders of the president of the republic or his representative. It continues, “If the armed forces assume this task, their officers and noncommissioned officers shall have the powers of the judicial police officers.”

Judicial oversight is a state-granted prerogative to law enforcement authorities empowering them to arrest civilians legally accused of the commission of crimes. The Egyptian Criminal Code of Procedure defines the powers of judicial officers. It set forth that "the judicial officer shall search for crimes and perpetrators thereof and shall gather evidence necessary to conduct an investigation with respect to the lawsuit.”

It further states that judicial officers shall act under the command of the Public Prosecution and be subject to its supervision in executing their function.

The new amendment seems to be in violation of the Egyptian Constitution, which prohibits the trial of any citizen except before their natural judge, and specifies that only military men can be prosecuted before the military prosecution.

Article 97 of the 2014 Egyptian Constitution stipulates, “Litigation is a safeguarded right guaranteed to all. The state shall bring together the litigating parties and work toward speedy judgment in cases. It is forbidden to grant any act or administrative decision immunity from judicial oversight. Individuals may only be tried before their natural judge. Extraordinary courts are forbidden.”

This is not the only legal article that the newly ratified amendments contravene. Article 204 of the constitution excludes civilians from the scope of the military jurisdiction.

The article reads, “The military judiciary is an independent judiciary that adjudicates exclusively in all crimes related to the armed forces, its officers, personnel and their equals, and in the crimes committed by general intelligence personnel during and because of the service. Civilians cannot stand trial before military courts except for crimes that represent a direct assault against military facilities, military barracks or whatever falls under their authority; stipulated military or border zones.”

The amendments come at a time when human rights organizations and human rights advocates accuse the Egyptian authorities of exploiting the coronavirus crisis to further repress public freedoms and political life, and launch expanded detention campaigns.

A joint statement published April 29 and signed by eight Egyptian human rights organizations, some of which are based in Cairo and others outside Egypt, said, “Arrests, imprisonment, enforced disappearance and other acts of political retaliation have been inflicted upon ever-increasing numbers of peaceful dissidents.”

It continued, “The presidential pardon and conditional release defy logic in that they both show that legally the peaceful exercise of fundamental rights and/or political participation is considered as a greater threat to public safety than is either violent crimes or prison overcrowding. It is unconscionable that amid the coronavirus crisis, the Egyptian government is prioritizing political retaliation over concerns of public safety.”

Sisi had issued a presidential pardon in April, which according to the above-mentioned statement, did not include political prisoners.

A lawyer residing in Egypt told Al-Monitor on condition of anonymity that the new amendments are tantamount to measures of repression and aim to expand the powers of the military authority to allow it to repress civilians.

“Several human rights lawyers in Egypt will examine how to confront the decision of granting the prerogatives of judicial officers to the armed forces members. We will be challenging this decision before the Constitutional Court,” he said. “The Egyptian authorities are exploiting the coronavirus crisis to control the lives of Egyptians.”