The Egyptian government has relocated dozens of families from the Manshiyet Nasr area after a rockslide, on the pretext that their houses are too damaged, while in reality the government is on a quest to develop Cairo’s slum areas. 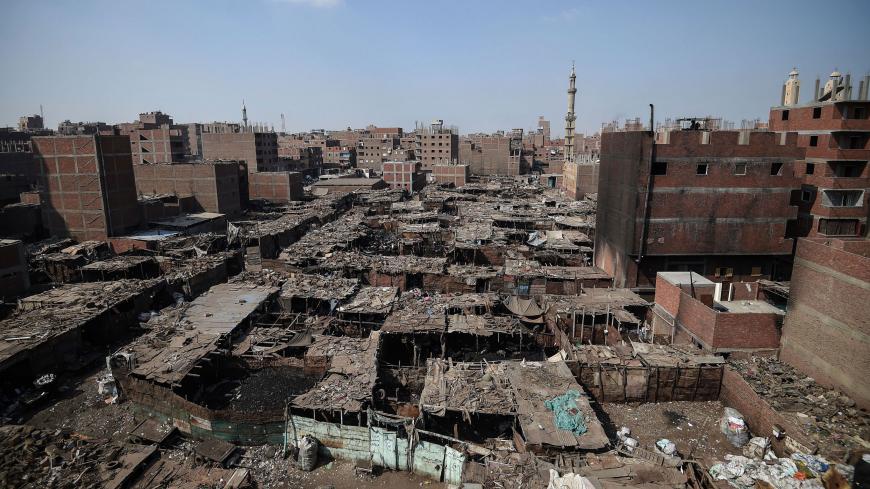 CAIRO — Eighteen months behind in rent and unable to pay utility bills, Amr is waiting for the day he is evicted from his apartment — again.

Until four years ago, Amr, 71, was able to make a meager living from his pension of 310 Egyptian pounds ($17.50) and selling clothing materials from his shop in the Razzaz area of the Manshiyet Nasr suburb in southeast Cairo, where he had lived for 40 years.

But the government relocated him to Al-Asmarat compound in the Mokattam neighborhood of Cairo, over 10 kilometers (6 miles) from his home, because the apartment block he lived in was deemed unsafe and demolished in 2015. Initially, neighbors housed him in Manshiyet Nasr before public housing was provided in 2016.

Most days, he commutes back to Manshiyet Nasr from the compound to work in his shop, but the round trip costs him 20 Egyptian pounds ($1.15), a significant amount for the pension he receives and made even more difficult because he relies on crutches to walk.

While he said his apartment in Al-Asmarat is clean and new, it is far from what was his daily life; there are no markets or jobs and his family and friends do not live in the area. “It’s soulless and lonely,” he told Al-Monitor.

Al-Asmarat was established in 2016, specifically for people who are evicted from informal areas of Cairo.

Amr has applied for multiple loans to pay the rent and bills that amount to 300 pounds ($17) a month, but he has been rejected every time. “If they reject my loan applications, whose do they actually accept?” Amr pleaded.

Some living situations in informal areas in Cairo, where up to 60% of the city’s population lives, are genuinely untenable and parts of Manshiyet Nasr are no exception. In 2008, a rockslide in the neighboring area of Duweiqa killed at least 119 people. Many of the apartments in the area are cramped and poorly built and there is little formal public transportation and infrastructure; in some cases there is no running water or connection to the electricity grid.

Following another rockslide on Jan. 29 in the Razzaz area, 82 families were relocated to Al-Asmarat. No casualties were reported.

While various Egyptian media outlets have claimed that some of the houses were destroyed, a recent visit by Al-Monitor showed this was not the case. Residents told Al-Monitor that although there was a rockslide, it did not destroy any houses. They claim, instead, that the government has wanted to demolish many houses in the area for a long time, because, among other reasons, they see the area as unsafe to live in, and use this as a pretext.

One resident told Al-Monitor on condition of anonymity that her apartment block was demolished by the government. But because her husband was at work while residents were relocated, by the time he went to register his name at the local government agency to move to Al-Asmarat, others had been put on the list already and her family missed out. She believes they have little legal recourse to find other housing. For now, she is staying with family in the area.

Al-Ahram reported Seddiq as saying that 14 billion pounds ($798 million) has been spent already to develop slum areas and to make improvements to existing houses in informal areas.

The ISDF has listed approximately 1,100 "slum" areas in Egypt and around 350 in Greater Cairo.

Al-Monitor contacted Seddiq for this story and while initially agreeing to an interview, he later said that he was unavailable.

Researchers of informal housing in Cairo told Al-Monitor that there has been a much greater emphasis on demolishing houses and often evicting people against their will in recent years.

Ahmed Zazaa, a researcher and urban planner, argues that although the reasons vary for both demolitions and evictions, the outcome remains the same. “The whole idea is pretty clear: For the state, there is this tendency to remove lots of informal areas and relocate residents to these gated cities like Al-Asmarat,” he told Al-Monitor. “They don’t care what will happen. No, there is no logic — orders are just executed.”

By August 2018, the historic Boulaq neighborhood in the Maspero area was all but completely flattened. Residents were forced to leave their homes and most were relocated to Al-Asmarat compound and received an amount that was far below the value of their land, according to residents and researchers.

Due to the high land value of the Boulaq area, which sits next to downtown Cairo and the Nile, it has for over a decade been an area of interest to investors.

Just to the north of central Cairo lies Al-Warraq Island, home to approximately 100,000 people, which has also been attractive to investors. In 2017, one local protester was killed when security forces unsuccessfully tried to demolish houses so investors could redevelop the island.

At the time, photos circulated on Egyptian social media platforms showing how the island could be potentially developed into a Dubai-like district on the Nile.

Egypt’s President Abdel Fattah al-Sisi in May 2018 announced a campaign to recover all state-owned lands — approximately 800,000 hectares according to government estimates — that had been encroached upon “illegally.”

Al-Warraq Island is considered part of that land, but residents of the island claim that many of their families have been living in the area for over 100 years and that they have contracts to prove it.

“They want the whole island to create a Manhattan in Cairo,” one resident of Al-Warraq told Al-Monitor on condition of anonymity. “We have contracts but they will not accept them. We are waiting to see what will happen. … There are lots of solutions such as paying us a fair amount for the land, but it could become violent.”

While residents of Al-Warraq continue to resist being evicted and may well succeed, for many it is too late and they must find a way to get by in places like Al-Asmarat, in spite of the difficulties.

“It’s surrounded by walls with very few gates that have watchtowers with security on it — and there are closed-circuit TV cameras inside Al-Asmarat,” Zazzaa told Al-Monitor. “It’s like a '1984' narrative.”

David Sims, an independent urban planner and author, described the phenomenon as “social engineering” in an interview with Al-Monitor. “The fact that they are moving there, they have lost their social capital,” he said. “[The government] doesn't think about that — they build and [residents] are uprooted.”