A recent series of fires in downtown Cairo has ignited public anger, with some accusing the state of seeking to clear the region of informal vendors. 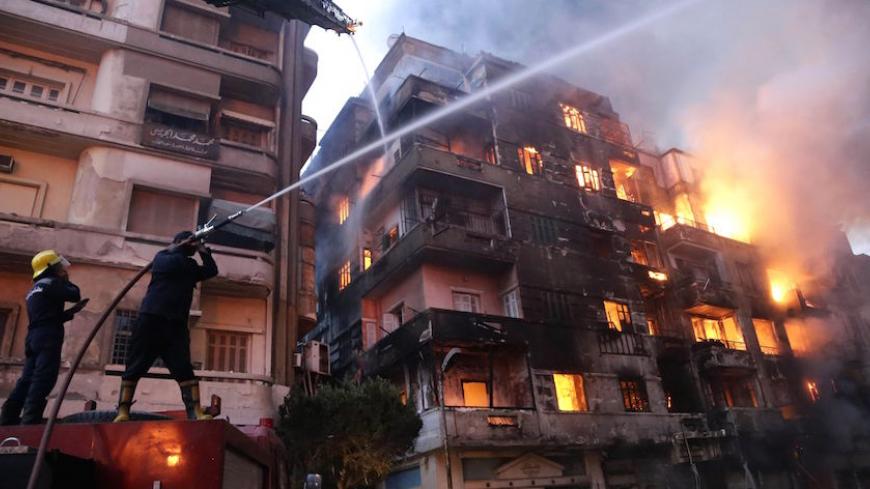 CAIRO — A number of massive fires have erupted since May 9 in various areas of Cairo and other provinces, destroying popular markets, residential properties, public facilities, government buildings and agricultural land. The state has yet to officially announce a clear reason for the fires, which have led to a state of public anger among citizens, particularly those affected by the blazes.

In the Ataba district of central Cairo, which is home to the largest popular market frequented by thousands of shoppers on a daily basis, a fire broke out May 9 and burned down more than 250 stores and commercial warehouses. This was followed by another fire in al-Ghoria, a commercial district of the capital considered to be the heart of Cairo. Other blazes shortly followed that affected a Cairo governorate building, the Ministry of Interior, the faculty of sciences at Cairo University, the Cinema Institute and a school in the Doqqi neighborhood. These fires brought back memories of the Cairo fire of January 1952, which was the initial spark for the July 1952 Revolution that ended the rule of King Farouk.

With fires breaking out on a near daily basis, the fires in Ataba and al-Ghoria, along with the destruction of the largest commercial center upon which a huge segment of Egypt's lower classes rely, resulted in an increased state of anger against the government and the presidency. It reached the point that some accused the state of being behind the fires in order to empty the downtown area of vendors and commercial activity.

Mohammad Azab, the chairman of the Engineering Syndicate's technical committee that was tasked with investigating the cause of the Ataba fire, told Al-Monitor, "The committee's final report concluded that a number of factors contributed to the fires, most notably that these areas had a concentration of storehouses containing flammable liquids and the absence of fire brigade [stations] nearby."

The report did not mention any reason for the cause of the fires, merely providing general recommendations to the government to ensure that similar blazes do not erupt again in the markets. "Our role was not to determine who started these fires," Azab said.

Merchants affected by the fire in al-Ghoria chanted, "Arson" and "Leave, Sisi," in demonstrations the days following the blazes, indicating they thought that these fires were not accidental but rather orchestrated by those who would benefit from clearing out vendors from the area.

Mohammed Abada, the owner of a fabric shop in al-Ghoria, told Al-Monitor, "The fire started in a number of shops and only minutes later we were shocked to discover that dozens of other shops — which were not adjacent [to the initial blaze] — were also on fire."

He said, "We are certain that this is a case of arson. Even though we have no problem with the state, we will not give up our right to compensation and we want to know the culprit responsible for harming all these families that rely on these modest commercial activities."

Street vendors and unlicensed shop owners, particularly those located in the downtown area, have played an important role in the political events and demonstrations against the government since the overthrow of former President Hosni Mubarak in 2011. The security services used them to confront demonstrators and prevent the latter from reaching Tahrir Square or other nearby squares, leading them to be referred to by some in Egypt as "honorable citizens." At the same time, however, the vendors and shop owners were a constant cause of headache for the authorities because they opposed development plans in downtown Cairo.

The government's failure to quickly control the fires caused an outbreak of public anger, despite Prime Minister Sherif Ismail's visit to the affected area in Ataba and the state's promises to investigate the cause of the fires. The meager compensation offered — about 5,000 Egyptian pounds ($560) — and the issuance of decisions to move street vendors' carts increased resentment among those affected, who have claimed that the government has long sought to put an end to their businesses in these areas.

Nasser al-Sayyed, a vendor in his 50s who works in the downtown area, lost about 50,000 pounds worth of goods in one of the blazes. "The compensation offered by the government is very small and not commensurate with the size of the losses we incurred. Even so, we doubt they will pay out the compensation easily," he told Al-Monitor.

He added, "The government has blocked all means for us to make an honest living, despite the fact that we love and support the president."

Economically, the government seeks to integrate informal business activities into the formal economy within the scope of its economic and social development plan, especially since the government has lost its ability to regulate these markets and is not receiving any financial returns from informal vendors in the form of taxes or licensing fees. Some claim that the destruction of the largest centers of the informal economy could benefit the state, as it would allow for restructuring these areas.

It remains to be seen to what extent the fires will affect confidence in the state and its ability to manage crises. The failure to provide a clear cause for the successive fires increases tension on the domestic front, as the citizens are left to bear the economic costs alone. It seems Sisi has taken note of this, making televised remarks May 17 in which he called on the government to quickly provide compensation to those affected to relieve their suffering.