Rawabi, the new Palestinian city under construction in the West Bank, has faced criticism from Palestinians, ranging from the involvement of Israeli companies to its design, which largely mimics an Israeli settlement. 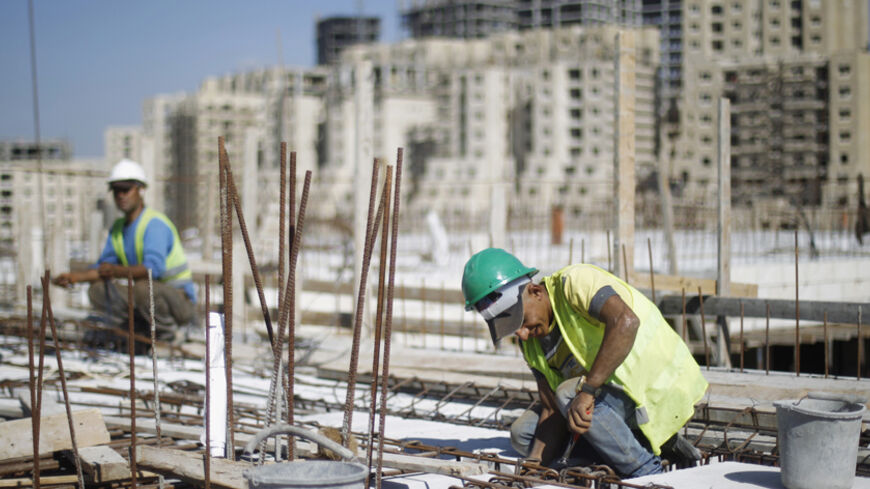 Palestinian laborers work at a construction site in the new Palestinian town called Rawabi, or The Hills, near the West Bank city of Ramallah, Oct. 27, 2013. - REUTERS/Mohamad Torokman

RAMALLAH, West Bank — On the road linking Jerusalem and Nablus, construction continues on the city of Rawabi, 9 kilometers (5.6 miles) to the north of Ramallah in the central West Bank. The project has been controversial since the laying of the first stone, eliciting criticism over its design and the role of Israeli companies in its construction.

Following the 2008 Palestine Investment Conference, at which the development of Rawabi was discussed, the Qatari Diar Real Estate Co. and Massar International Real Estate Co. signed a strategic partnership agreement to build the city. The Bayti Real Estate Investment Co., owned jointly by Diar and Massar, is the project's developer. The Palestinian businessman Bashar al-Masri is chairman of Massar and heads the Bayti administrative board.

The Palestinian Authority (PA) ratified the infrastructure plans for the city, and in 2008 committed to providing the support necessary for the off-site infrastructure required. This included the road network outside the city, electricity and water systems and wastewater treatment and sewage. The PA will also be responsible for basic services, such as education, health, security, public buildings and other public utilities, which will benefit not only the residents of Rawabi, but also neighboring towns and villages.

About 600 Palestinians are expected to be living in the city by the end of the year. Rawabi will include 23 residential neighborhoods, with more than 5,000 housing units, and will have the capacity to accommodate 25,000 people in the first phase. The city is designed for a total population of 40,000. It will be subject to the PA’s authority and administered initially by a local committee (established by the Palestinian Legislative Council in 2013) until elections are held.

Rawabi does not resemble any other Palestinian city in its architectural design or patterns and does not reflect Palestinians' cultural heritage or struggle. Instead, it features a Western-style architecture and looks like nearby Israeli settlements. The city is being built on 6,300 dunums, (1,557 acres) a large part of which was confiscated under a decree signed by Palestinian President Mahmoud Abbas in November 2009 after many Palestinian owners refused to sell it. Construction began on the city in January 2010.

Rawaba's inception elicted accusations of political and economic normalization with Israel. Organizations working on the boycott against Israel have issued statements criticizing the project's administrators, accusing them of undermining the Palestinian struggle through normalization. The campaign of criticism became vocal in 2009, when Rawaba's project administrators accepted a donation of 3,000 trees from the Jewish National Fund for planting there. It expanded when the administrators contracted with Israeli companies to supply construction materials and invited Israelis to buy apartments in the city. In addition, Dov Weisglass, who served as senior adviser to former Prime Minister Ariel Sharon, was hired as a legal and regulatory consultant for the project. The city administrators also came under fire for participating in economic meetings and technology conferences with Israelis.

Wasel Abu Yousef, a senior official of the Palestine Liberation Organization, told Al-Monitor, “All Palestinian factions and nongovernmental institutions, as well as all the Palestinian people, have made a decision to boycott the occupation forces, which is something that should apply to everyone, including Rawabi, as there has been talk that Israeli companies contributed to its construction.” He also stated, “If there were actually Israeli companies operating in Rawabi and bringing in raw materials, this would be totally unacceptable. The light should be shed on the parties dealing with the occupation forces, as it has been agreed to fully boycott everything that is related to Israel.”

Itiraf al-Rimawi, head of the Bisan Center for Research and Development, spoke to Al-Monitor about the city's origins, saying, “The inception of the city raises many questions, as it was the result of Israel’s political interference in light of stalled negotiations during Ehud Olmert’s government. At that time, the green light was given to start building [Rawabi] and provide all the facilities so that the city could be part of the ‘economic peace,’ whose most prominent features are joint industrial areas.”

Rimawi further stated, however, “The city of Rawabi does not add any new productive economic value in terms of economic development according to a national perspective, because there are no production facilities [factories] in the city. In addition, the salaries of the city’s residents will be spent in favor of a handful of big investors or maybe [end up] in the hands of one sole investor. This reflects the exploitative economy and the concentration of wealth in the hands of a few people. It also shows support for monopolizing businessmen, even in occupied or destroyed countries.”

Rawabi's developers chose a design along the architectural lines of Modi'in. The city’s architecture attracted criticism because the Israeli architect Moshe Safdie — who designed the Modi’in settlement, in Bil’in near Ramallah — was consulted on the project. He had also previously designed the Mamilla Mall and oversaw the redesign of the Jewish Quarter of Jerusalem's Old City. In Rimawi's eyes, the architecture of Rawabi represents the colonized imitating the colonizer. In fact, the Atarot settlement, built in Atara and facing Rawabi, is also similar in terms of its construction, including its rowhouses and reliance on brick.

In February, the Times of Israel published a story on the city, in which Masri responded to accusations of cooperating with Israeli companies to build Rawabi. He said that Israeli companies were not involved in the construction, but confirmed that Israelis provided some of the raw materials. Masri also said companies from Israeli settlements had been excluded from the project, and otherwise project administrators bought materials from the suppliers, Israelis and non-Israelis, who offered the best prices. Al-Monitor tried, but to no avail, to contact the city administrators to obtain information on the current state of construction and a response to the criticisms and accusations that continue to be leveled against them.

Omar Assaf, representative of the Palestinian Trade Union Coalition to BDS, told Al-Monitor, “The controversy surrounding Rawabi is due to the fact that the city is not founded on a proper basis. The project is filled with flaws that allowed the occupation to interfere, such as the Jewish National Fund donating trees to be planted in the city. Problems emerged as well concerning the land and the attempts to take over parcels of it in any way possible, despite the refusal of owners to sell. All this raises many questions about the project.”

Assaf also said, “We have been communicating with the administrators in Rawabi since the first day of the project's launch. As boycott activists, we expressed our opposition to the direction this project might take, but no one listened to us and we were accused of being jealous of the project’s success.” Assaf said, “We support construction and the rights of our people to benefit from such projects, provided that they support the struggle of the people and do not work with the occupation’s projects.”

The controversy over Rawabi city will likely continue after its inauguration.