Europe Holds No Promise For the Middle East

The EU foreign policy for the Middle East is paralyzed, concludes Akiva Eldar, after spending three days in the organization’s Brussels headquarters. 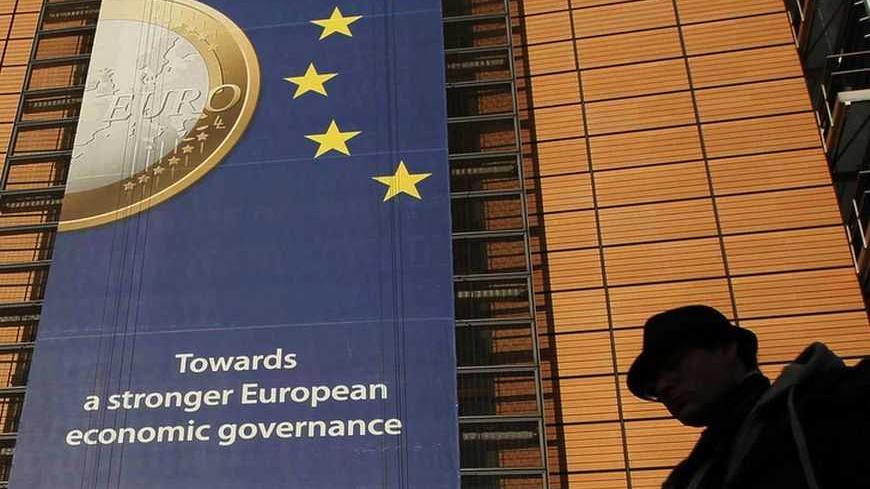 A banner depicting a Euro coin is seen on the European Commission headquarters building in Brussels, Dec. 19, 2011. - REUTERS/Yves Herman

BRUSSELS — I’ve been following Israel’s foreign relations closely for 30 years. I have often heard German statesmen and politicians say that Israel owes Germany’s support to the victims of the Holocaust. The words were always whispered behind closed doors, off the record.

Last week, they were uttered publicly by a senior German politician, Hans-Gert Pöttering, one of those closest to Chancellor Angela Merkel. Pöttering, who served for many years as president of the European Parliament, spoke at a packed auditorium in the center of Brussels. “Were it not for the Holocaust, Germany would not have abstained at the UN vote on the recognition of Palestine as a non-member state,” said the man who was appointed last year to chair the Konrad Adenauer Foundation, named after the first post-World War II German chancellor who was responsible for the reparations agreement between Israel and Germany. “It would have voted in favor.” Pöttering did not attempt to conceal his hope that Avigdor Liberman — whose name (meaning “a beloved man” in German) does not suit him, he said — would not be coming back to Brussels as Israel’s foreign minister.

He finished by saying that the Israeli-Palestinian conflict makes it hard for Europe to conduct a dialogue with the Muslim world. “Previously, the Israelis did not want European involvement, now you are also opposed to American involvement,” he lashed out.

On the stage, to the left of the German speaker, sat Adm. (Res.) Ami Ayalon, who has served as a cabinet minister, head of the Shin Bet security service and commander of the navy, and Gilad Sher, a lawyer who was Prime Minister Ehud Barak’s chief of staff and policy coordinator. In the front row were philanthropist and peace activist Orni Petruschka, Ayalon and Sher’s partner in the leadership of Blue White Future, [a pro-peace movement] and the organization’s CEO, Dar Nadler. They came to the capital of the European Union at the instigation of the Hanns Seidel Foundation to persuade the Europeans to exert their influence on the Americans. Ayalon and Sher sought to equip the Europeans with their diplomatic blueprint, the gist of which is Israeli recognition of a Palestinian state and the launch of negotiations on a permanent agreement, based on the Arab Peace Initiative (peace and normalization of relations with members of the Arab League in return for Israeli withdrawal to the 1967 borders) and a declaration that Israel has no territorial claims on the eastern side of the security/separation fence.

The leaders of Blue White Future warned that European inactivity until the end of negotiations on land exchanges, the division of Jerusalem and a solution to the Palestinian refugee problem would bring about the demise of a Jewish and democratic Israel. They presented senior EU officials with a plan for the immediate evacuation of all settlements east of the fence, including a precise mapping of vacant lands within the Green Line [the de facto 1967 border] on which the Israeli evacuees could be resettled. They recommended that everyone learn the lessons of the unilateral Israeli withdrawal from the Gaza Strip, which dropped the Strip like a ripe fruit into the hands of Hamas (Europe supported the disengagement from Gaza) and replace that totally unilateral action with coordinated unilateral steps.

The Seidel Foundation invited me to join the fascinating three-day journey of the “Blue White Future” leadership through the endless corridors of the European Union. I participated in meetings with leading officials of the European Commission, with a senior official in the office of EU foreign secretary Catherine Ashton and with members of the European Parliament. I was exposed to the frustrations of the umbrella organization of 27 states, whose population is greater than that of the United States. Parliament member Ivo Vajgl, Slovenia’s former foreign minister, recounted how Israeli government ministers refused to meet the European Parliament delegation, which he headed, and Israeli members of Knesset [parliament] left them waiting a long time outside their meeting room. “Israel is humiliating us,” said Vajgl.

I was struck by the helplessness of the European Union, which was honored last year with the Nobel Peace Prize, regarding peacemaking between Israel and the Palestinians, an end to settlements and to the occupation.

All the senior officials we met in Brussels, without exception, listened attentively to the guests’ plan, made remarks and at the end sent them to Berlin, Paris, London and Prague, too, which had voted at the UN against upgrading status of the Palestinian Authority. One journalist even asked angrily, “Why did you come here, anyway?” When Ayalon, Sher and Petruschka explained why economic sanctions would not jump-start the diplomatic process, the hosts said they were in complete agreement that there’s no chance the 27 countries represented in Brussels could reach agreement regarding punitive steps of any kind against Israel for its construction in the settlements.

Past experience teaches us that the recommendations of the European consuls to take steps against Israel, such as imposing economic sanctions on the settlements — as published this week in the Haaretz newspaper — are gathering dust in the desk drawers of the European Union.

On the other hand, they stressed that as long as Israel continues to expend settlements in the West Bank and East Jerusalem, there’s not even a slim chance that members of the Union will arrive at a consensus regarding the upgrading of Israel’s position. In addition, a senior European official pointed with no small amount of embarrassment to the fact that the EU is incapable of agreeing to include Hezbollah in the list of terror organizations, even after the official Bulgarian government investigation concluded with certainty that the organization was responsible for the attack in which five Israeli tourists were murdered last year in a Bulgarian resort town.

Europe is mostly busy with its own problems, the financial crises and the integration of new members (next in line is Croatia. For the information of reader Prime Minister Benjamin Netanyahu — this was made possible after the Croatians met the EU’s demand to erase from their constitution the article stating that Croatia is the national home of the Croatian people). The Quartet, the mechanism established with the aim of advancing the diplomatic process, has turned into a joke. In answer to my question about former Prime Minister Tony Blair’s activity as the special envoy of the Quartet (the US, Russia, the European Union and the UN), the two officials sitting across from us exchanged meaningful looks and burst out laughing. They said the EU has decided to stop funding Blair, who has disappeared somewhere in East Jerusalem.

Thus, the Europeans are directing their eyes westward, to the 2009 Nobel Peace Prize laureate, US President Barack Obama. So far, the Union’s special envoy to the Middle East, Andreas Reinicke, is the only bearer of good news. He says EU's foreign policy chief, Lady Catherine Ashton, and Obama have set themselves a one-year deadline to bring about a permanent settlement, not an interim arrangement, not a Palestinian state within temporary borders, but rather the establishment of a sovereign Palestinian state side-by-side with the state of Israel. The impression in Ashton’s office, on the other hand, is that Obama will focus his meeting with  Netanyahu on the Iranian nuclear issue. We heard there that at his last meeting with Ashton, each time the European minister wished to raise the Israeli-Palestinian conflict, Netanyahu said this was a marginal issue which deflects attention from the big Iranian threat. “If this is a marginal issue”, Ashton is said to have answered, “let’s get it out of our way so we can be free to deal with the main issue.” The prime minister, we were told, did not respond.

Brussels hopes the next Israeli government will have a response. They are not holding their breath.