US Secretary of State John Kerry's statements of "progress" in the peace process are keeping the European Union from taking a more proactive role. 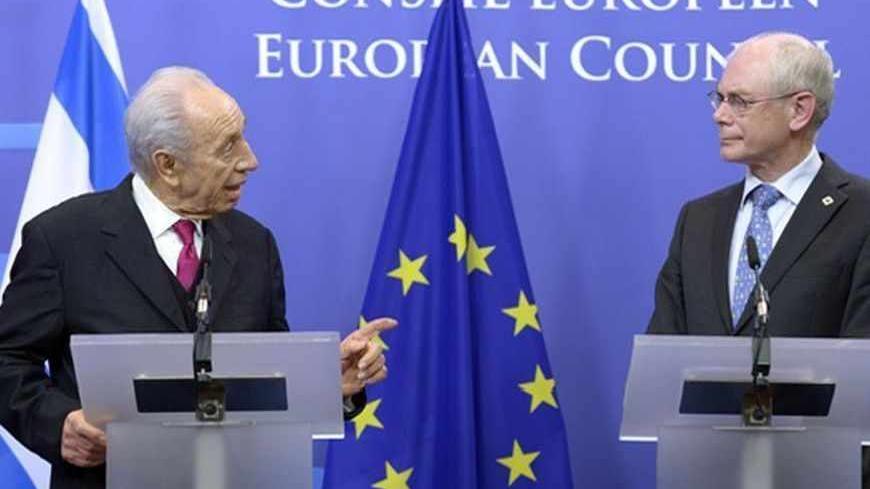 Several days before US Secretary of State John Kerry started his fifth round of shuttle diplomacy in the region, Baroness Catherine Ashton, the European Union’s high representative of the Union for Foreign Affairs and Security Policy, wound up a working visit to Jordan, Egypt, Iraq, Israel and the West Bank. In Jerusalem, Ashton met a confused and even frightened Israeli prime minister. Prime Minister Benjamin Netanyahu’s fear of the shock waves going through Egypt and Syria and the instability in Jordan are competing with his anxiety over Iran’s nuclear program, and recently also with concern about Israel becoming a binational state. On the face of it, Netanyahu understands that freezing the diplomatic process will perpetuate the binational reality that already exists between the Mediterranean and the Jordan River. Actually, he refuses to pay the list price for changing this reality, especially given the regional turbulence.

Ashton, like other important European diplomats, believes that the volatile situation in Israel’s immediate surroundings actually makes the need to prevent an additional upheaval in the region especially urgent. They question the assumption — which appears in Shlomi Eldar’s article, too — that the continued stalemate in negotiations will not affect the situation in the occupied territories. In Brussels, the prevailing assumption is that the repercussions of the failed diplomacy for the status of the Palestinian Authority (PA) should be taken into account in the coming months. They warn that the cumulative rage against the occupation and the settlements, the lack of hope for a diplomatic arrangement and the fear of an economic collapse will bring the Arab Spring to the Palestinian arena and result in the toppling of the PA and cause governmental and security chaos.

This fear explains the growing desire on the part of central EU states, led by Britain and France, to increase pressure on Israel to move toward an arrangement with the PA. At the end of an EU foreign ministers’ meeting on June 24, both countries wanted to issue a tough statement condemning construction in the settlements and place the blame on Israel for torpedoing diplomatic negotiations.

Netanyahu told Ashton that such an announcement on the eve of Kerry’s visit to the region would undermine his efforts to breathe life into the diplomatic process. Ashton acceded to his request, thereby adopting the approach of her predecessor, former EU High Representative for Foreign Affairs and Security Policy Javier Solana, and German Chancellor Angela Merkel, according to which the United States conducts the Middle East orchestra and Europe plays second fiddle. Even when the United States loses the diplomatic battle, Europe lets it conduct the unfinished Israeli-Palestinian symphony. The meeting of the EU foreign ministers ended, thus, in a whimper, with another anemic statement. Once again, the European politicians did not stand in the way of the United States as it trod in place.

Barely three days went by and Israel paid back Ashton and Merkel by issuing 40 injunctions to stop work on the erection of tents, hothouses and a water hole for residents of the Palestinian village of Susya in the south Hebron mountain (Area C). Several of those tents were erected with EU funding to provide basic humanitarian services like a clinic, a kindergarten and a makeshift school. Inspectors of Israel’s civil administration in the West Bank accorded similar treatment to a solar energy facility, paid for by German taxpayers. A committee of the civil administration is to decide in the coming days whether to upgrade the work stoppage injunctions and turn them into dismantlement orders. A committee decision to go ahead with destruction of the project would be a slap in the face for Ashton, who announced that she had already called on Israel a year ago to comply with its commitments to stop forced relocations of Palestinians living in Area C as well as the destruction of homes there, to simplify the planning process and ensure access to water and humanitarian needs.

As reflected in remarks made this week by Justice Minister Tzipi Livni on July 1 at the annual conference of accountants in Eilat, the European public is losing patience with Israel. The former foreign minister, who meets often with European politicians and diplomats, warned that the boycott imposed by Europeans against products made in the settlements will be followed by a boycott on all Israeli products. “Their problem is with Israel, which is perceived as a colonialist state,” explained the minister in charge of negotiations with the Palestinians.

In a memorandum published at the end of June by the Institute of National Security Studies (INSS), Shimon Stein, Israel’s former ambassador to Germany, wrote things that a minister in Netanyahu’s government cannot say. According to Stein, his talks with European officials reveal striking mistrust and skepticism of Netanyahu’s willingness to advance the two-state solution. The retired senior diplomat warns that a freeze in talks will encourage countries like France, Britain and others to once again express their views openly on various central issues on the agenda. “There are voices calling on the Union — in the event that talks do not result in progress after a time — to toughen its stance toward Israel to the extent of recognizing the Palestinian state.” Stein got the impression that Europe expects real progress in negotiations and will not be satisfied just with a renewal of negotiations between Israel and the Palestinians.

As long as Kerry announces that there’s progress in his talks and promises to return to the region soon, Israel is protected against such European moves. As long as the US wheels keep spinning — even if the motor is idling — Europe will be careful not to be portrayed as a spoke in those wheels. Netanyahu should hope that Kerry keeps running from Jerusalem to Ramallah, enabling the prime minister to float “tents” in the air. On the day US President Barack Obama decides to stop wasting fuel on a “peace process” leading nowhere, the EU will have to decide whether to take the wheel or stay behind all the way as we journey toward an abyss.