The European Union has taken a step closer to boycotting products made in the settlements, writes Akiva Eldar. 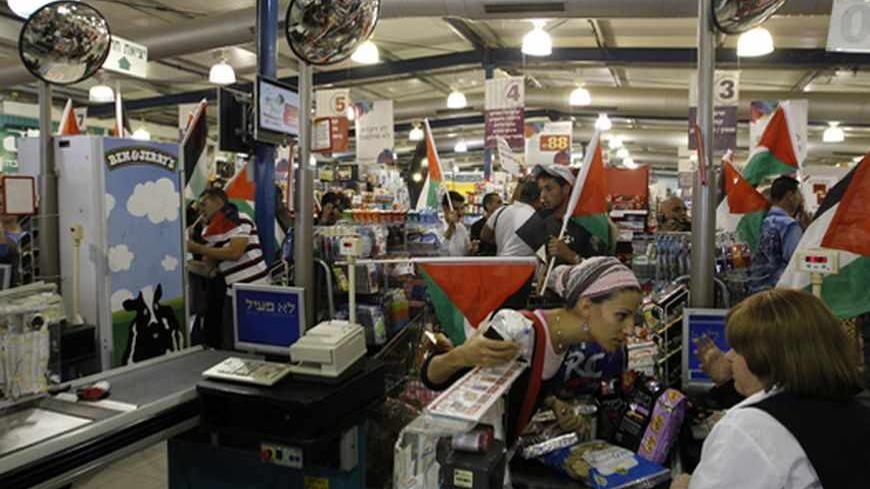 An Israeli customer speaks with a cashier as foreign and Palestinian activists holding Palestinian flags march through a supermarket in the West Bank Jewish settlement of Modiin Illit, Oct. 24, 2012. Some 50 activists were calling for a boycott of settlement products. - REUTERS/Ammar Awad

As the United States attempts to renew the diplomatic process between Israel and the Palestinians, the European Union is adopting tougher measures toward Israeli settlements in the West Bank. Al-Monitor has learned that 13 member states, including Britain, France, Spain and the Netherlands, have decided to label the products imported from the settlements.

On April 12, in a letter sent to the EU High Representative for Foreign Affairs Catherine Ashton, a copy of which was obtained by Al-Monitor, the foreign ministers welcomed the call by Lady Ashton on Feb. 22 to the 27 EU foreign ministers for full enforcement of EU legislation regarding the label ing of products from Israeli settlements.

“This step is in fulfillment of our previous commitments and is fully consistent with longstanding EU policy in relation to Israeli settlements in the occupied Palestinian territories,” they wrote.

“As you set out, our consumers have the right to an informed choice; this initiative will help support our retailers to provide this. The correct labeling of products is necessary to ensure our consumers are not being misled by false information.”

The decision by the EU states comes despite efforts by the Israeli Foreign Ministry and Israeli ambassadors to EU states to prevent implementation of Ashton’s guidelines.

The other countries that have announced the adoption of the directive are Austria, Belgium, Denmark, Finland, Ireland, Luxembourg, Malta, Portugal and Slovenia. Germany, Italy, Sweden and Greece are prominently absent from the list of the letter’s signatory states.

A senior Palestinian official told Al-Monitor that Palestinian President Mahmoud Abbas had recently appealed to European leaders urging them to help Secretary of State John Kerry thaw the freeze in negotiations with Israel. The Palestinians view the decision by the 13 foreign ministers as complementing US diplomatic moves. Senior Israeli officials, meanwhile, have told Al-Monitor that Prime Minister Benjamin Netanyahu informed Kerry that he rejects the Palestinian demand to start negotiations based on the 1967 borders, so long as they reject his demand that negotiations be based on a two-state solution — a state for the Jewish people alongside a state for the Palestinian people.

The Dutch government, considered by Israel as one of its closest friends in Europe, had already called on the country’s retail chains last month to label Israeli products made in the West Bank, the Golan Heights and East Jerusalem. It was preceded by Britain and South Africa. In response to those decisions, the umbrella organization of the settlements, the Yesha Council, announced that product labeling would “hurt the economic coexistence” in the industrial zones of Judea and Samaria and result in layoffs for many Palestinians.

An agreement reached nine years ago requires Israeli exporters marketing their products to EU states to provide the names of the settlements where the products are made, but does not require that they indicate whether the settlement is located on sovereign Israeli lands or in territories considered by the EU as occupied. But many European consumers who boycott settlement products cannot determine, just by the name, on which side of the Green Line dividing Israel from the territories the settlement is located. Customs authorities in EU countries also have a hard time sorting the merchandise based only on the name of the settlements in order to determine which exporters are entitled to the benefits of Israel’s customs agreements with the EU.

According to the agreement with the EU, products made in the occupied territories do not benefit from lower tariffs, but the Israeli Finance Ministry compensates the exporters for the extra cost.