The return of Avigdor Liberman as foreign minister spells trouble for the peace talks. 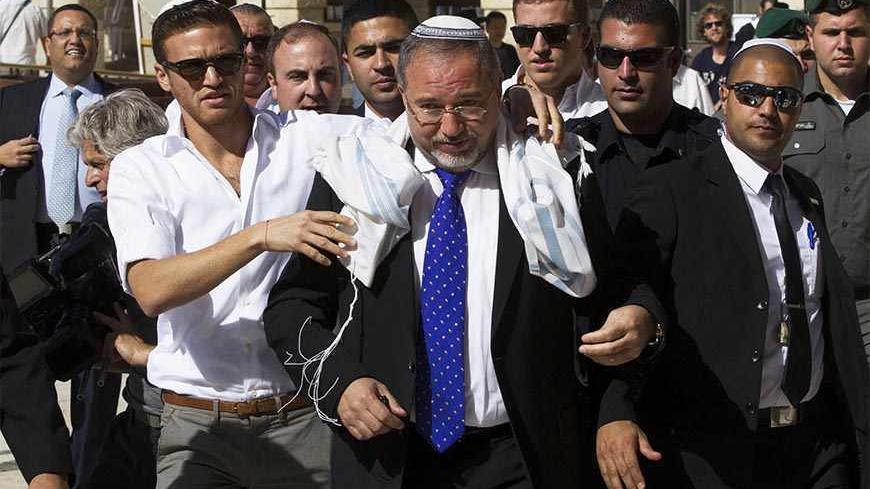 My acquaintances in the Palestinian Authority’s public relations department in Ramallah shed no tears yesterday, Nov. 6, when they heard about the court’s decision to acquit former Foreign Minister Avigdor Liberman. They have felt the absence of their neighbor’s No. 1 anti-diplomat and have longed for the days in which Liberman, with his special knack, would scratch the flesh-toned powder that covered the prime minister’s face whenever Benjamin Netanyahu mentioned the term “permanent arrangement.” As a senior official in the Mukataa once told me, “We can cut the cost of our own foreign minister. Liberman does the job for us much better than Riyad al-Maliki.”

With his acquittal, Israel once again has a salesman for whom the state’s customers around the world refuse to even open their doors. Liberman is officially a persona non grata in the neighboring Arab states of Egypt and Jordan. Though his deputy Zeev Elkin filled the position impressively as the far right’s messenger in the Foreign Service, within political circles there is no substitute for Liberman’s uninhibited tongue, which lashes out fearlessly at the gentiles.

If the transportation minister’s success is measured by the decline in traffic accidents, the foreign minister’s career depends on his ability to smooth corners and prevent diplomatic incidents. That is not the case with Liberman. Unlike his predecessors from the right — Moshe Arens, David Levy, Silvan Shalom and even Yitzhak Shamir — whose service as foreign minister tempered their public statements and sometimes even their positions, Liberman actually sharpens corners. The leader of the Yisrael Beiteinu movement, whose motto is “I keep my word,” hasn’t changed a single item in his lexicon, which happens to be that of a settler from Nokdim, where Liberman lives.

“I’m glad I managed to disappoint everyone,” he said at a press briefing in August 2009, two days before Netanyahu met with American envoy to the Middle East George Mitchell. “Everyone thought that I would say, ‘The view from here is different from the view from there,’ that I would break left and raise the banner of absolute peace. I can see better from here than I saw from there, and it reinforces all those opinions and attitudes with which I ran in the elections.”

Liberman’s opinions and attitudes had no deleterious effect on his political and party status. The alliance with the Likud party resulted in his promotion in the last elections to the second spot on the Likud list. Netanyahu was forced to keep the foreign ministry in trust for Liberman until the court ruled in his trial. But the rest of the world responded differently. There, opinions from Liberman’s school of thought and attitudes like those that he presents in every forum caused Israel’s international status to stoop to one of the lowest points in the country’s history.

Nov. 29 marks the one-year anniversary of Israel’s defeat at the United Nations General Assembly, after 138 member states voted to accept Palestine as a nonmember observer. Only nine countries voted against the decision, and 41 more abstained. Among the countries that rejected pleas by Liberman and Israeli ambassadors to vote against the Palestinians were most of the countries in Latin America and Africa, which Liberman prided himself on actually bothering to visit. Before flying there in July 2009, his ministry spokesperson explained, “This visit is part of the approach that Liberman instilled in the ministry since assuming his position: that Israel should develop new directions in its international policy in order to expand its influence and bolster the advancement of Israeli interests by building broad international coalitions.” Two of the states that Liberman visited, Brazil and Argentina, were among the five South American nations that recognized a Palestinian state within the 1967 borders.

I reported here last February that in a talk he gave in Brussels, Hans-Gert Pöttering, a confidante of German Chancellor Angela Merkel, who spent years as president of the European Parliament and currently serves as chair of the Konrad Adenauer Foundation, stated that were it not for the Holocaust, Germany would have joined the vast majority of EU states that voted to upgrade the Palestinians’ status. Pöttering expressed hope that Liberman, “who is nothing like his name” — Liberman/Liebermann is German for "beloved man" — would not be coming to Brussels anymore as Israel’s foreign minister.

Brussels still remembers Liberman’s undiplomatic — to put it mildly — response to criticism that Europeans dared raise against Israel’s settlement policy. The returning foreign minister said that as far as many foreign ministers in the European Union are concerned, “The destruction of Israel is self-evident.”

The news of Liberman’s return to the Foreign Ministry came in the midst of American efforts to breathe life into negotiations over the permanent arrangement being conducted by Israeli chief negotiator Tzipi Livni and Palestinian chief negotiator Saeb Erekat. Liberman has never hidden his opinion about the process, which began in Oslo 20 years ago. A few weeks after the Bar Ilan speech, in which Netanyahu raised the banner of a two-state solution, at the same August 2009 press briefing that was mentioned above, the fresh new foreign minister told reporters, “Anyone who says that the two-state solution will put an end to conflict doesn’t know what he is talking about or is being intentionally derisive.”

This message, which made a mockery of Netanyahu’s public statements and his promise to US President Barack Obama and the leaders of Europe that he is planning to partition the country, was repeated in a speech that Liberman delivered a year later on Sept. 28, 2010, to the United Nations General Assembly in New York. He embarrassed Netanyahu before the rest of the world by declaring that there is no chance of reaching a comprehensive peace agreement over the next few years. Liberman then suggested that Netanyahu and Obama’s “unrealistic” goal be replaced with a “long-term interim agreement,” an idea that has become outdated. And if that were not enough, Liberman went on to present his party’s plan to the international community: When the time comes, Israel would transfer villages in which Palestinian citizens of Israel now live to Palestine, with all of their residents.

Whenever Liberman contradicts one of Netanyahu’s statements about peace, the prime minister’s office is quick to release a statement to the effect that “The content of the foreign minister’s speech was not coordinated with the prime minister,” and to remind everyone that “It is the prime minister who conducts diplomatic negotiations on behalf of the state of Israel.” This ritual allows Netanyahu to portray himself as a moderate leader, who, unfortunately — woe is he — is tied down by a right-wing coalition. This way, it is much easier to cope with external pressures to end the Israeli occupation and establish a Palestinian state based on the 1967 borders, including East Jerusalem. Unfortunately for Netanyahu, this transparent and overworked “good cop, bad cop” routine is starting to grate on the international community. Liberman’s return to the foreign ministry will not extricate Netanyahu from the need to choose between personal and political isolation at home and deepening Israeli isolation abroad.