Liberman: Arab MK 'must be thrown out of Knesset'

Despite heading a small opposition party, former Foreign Minister Avigdor Liberman continues to attack the government and shows no intention of joining the coalition. 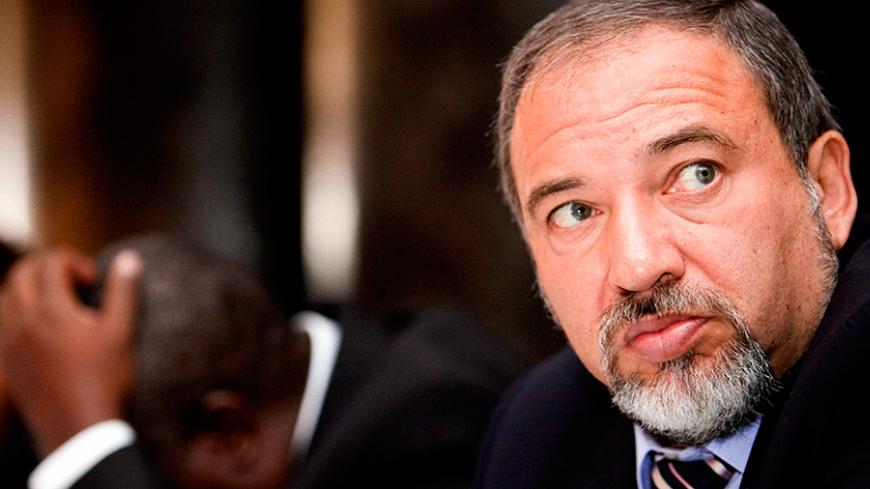 With the Israeli flag behind him, Yisrael Beitenu Chair Avigdor Liberman holds up a red-lettered banner screeching, “Throw Haneen Zoabi out of the Knesset — now!” in the opening of the video clip launching Liberman' new public campaign. The tacky-looking clip, filmed in the party chairman’s office in the Knesset, is designed to bring about the removal from Israel's parliament of both Arab Knesset member Zoabi and her Balad Party, one of the Arab parties that makes up the Joint List.

With no special effects or sophisticated graphics, in front of a shaky camera, Liberman addresses the public while grasping the sign in both hands. He calls on listeners to pressure Knesset members and ministers — mainly from right-wing and ultra-Orthodox parties — to support a bill he proposed, nicknamed the "Zoabi law."

In his characteristic combative manner, Liberman briefly explains that the objective of the new bill is to strip the High Court of Justice of its authority to overturn decisions by the Central Elections Committee. The committee has the power to disqualify lists and candidates from running in the Knesset’s general elections. Under the current law, the decisions of the committee must be confirmed by the court. Prior to the two last election campaigns, the High Court overturned the committee’s decisions to disqualify Zoabi’s candidacy based on claims that she had supported terror.

Liberman ends the clip with, “If you support my position, like and share. Haneen Zoabi must be thrown out of the Knesset, once and for all.”

From a political point of view, there is something refreshing in the former foreign minister’s belligerent act. Liberman heads a party that almost disappeared in the last elections, and now he fights from the depths of the opposition against his former partner, Prime Minister Benjamin Netanyahu. Liberman begins this campaign from a position of weakness, as he has no official position in the Knesset and heads a shrunken party that was severely affected by corruption investigations. After years of being accustomed to sitting pretty in the foreign minister’s seat, Liberman has been trying to reinvent himself in recent months.

Despite postelection assessments that Liberman would hurry to join Netanyahu’s government, he surprised everyone by staying out. After the government had been cobbled together, Liberman was expected to prefer to leave political life rather than lead a small faction in the opposition wilderness. But he remained to fight, and since then has consistently tried to topple Netanyahu from the premiership.

On Dec. 19, Liberman participated in a “cultural Shabbat” event in the town of Ness Ziona. Yedioth Ahronoth reported in its print edition that he repeated his appraisal that elections would be held in 2016, expressly committed himself not to join the government or contribute to any of Netanyahu’s attempts to form a large right-wing party and concluded with sharp criticism of the government.

“This is not a right-wing or nationalist government but an opportunistic one, which is concerned solely with its own survival,” he said. Liberman exploited the event to mention his "Zoabi law" and emphasized that Netanyahu’s government opposes the bill.

Meanwhile, polls show that Liberman is recovering and gathering strength. Ever since the eruption of the current wave of violence in October, Liberman has been leading public-opinion polls as the person who would know better than anyone else how to cope with terror. He garners more support than even Netanyahu. Recent opinion polls show that Yisrael Beitenu is making a comeback, testifying to the former foreign minister succeeding in finding a new space within Israeli politics.

Liberman is very far from enjoying the public status he held in the period of the previous government, when he was mentioned more than once as a possible candidate for the premiership, under certain political scenarios. But that was before the corruption investigation into several Yisrael Beitenu higher-ups — an inquiry that toppled numerous politicians including former Deputy Interior Minister Faina Kirshenbaum, who had been Liberman’s strongwoman and operational arm in the party. This blow came three months before the last elections, terrible timing for Yisrael Beitenu. The investigation almost totally destroyed the party’s campaign, directed at the liberal right-center.

At the time, Liberman talked about diplomatic compromises and Ariel Sharon-type pragmatism, and there were quite a few buyers of this line in the political center. But the corruption affair forced Liberman to change his campaign a moment before the elections, as the party’s electorate was extremely put off. The Yisrael Beitenu chairman then returned to his element and waged a campaign against Arab-Israelis with racist overtones. Liberman fought for every vote, aggressive and brazen, and managed to survive. Under such circumstances, the six mandates he ultimately received were an achievement.

Since then, Liberman clings to this public line, which seems to enjoy a considerable following. He no longer talks about diplomatic compromises but cleaves to nationalistic messages, attacks against Arab Knesset members and stinging, combative slogans on the war against terror. Liberman also uses the secular-civil agenda in appealing to the Russian public that is still faithful to him. On Dec. 21, he announced at a Yisrael Beitenu faction meeting that next week he will submit a bill that would allow municipal rabbis to deal with conversion, thus easing the conversion process for those interested.

“How can it be that municipal rabbis are authorized to conduct weddings, issue Kashrut certificates to businesses, yet be deprived of [authority over] only one issue: conversion? Therefore we’ll bring up the law of municipal rabbis again regarding their powers in dealing with conversion. Then we’ll see again how this coalition will vote.” This bill was designed to embarrass Netanyahu’s government and show the Russian secular community that Liberman is still their man in the Knesset.

Liberman is a rather active oppositionist. He responds to almost anything connected to the war on terror, foreign policy, religion and state — all the new-old banners he waves. He castigated the emerging Israel-Turkey agreement from almost every platform, claiming that it will inflict diplomatic damage on Israel.

“Opportunism is not a substitute for prudent and wise diplomacy,” Liberman said. “Erdogan heads a radical Islamic regime. The Turks trade with the Islamic State.”

At this stage, it is unclear where Liberman’s current campaign will lead him and whether — despite his recurring denials — he will ultimately join Netanyahu’s coalition before the next elections. What is certain is that the chairman of Yisrael Beitenu has succeeded in halting the political collapse he and his party had faced. Instead, Liberman has created positive momentum and has reinvented himself as a political alternative in the nationalist right. ​