Prime Minister Benjamin Netanyahu is exploiting a fraudulent symmetry between Kahane’s racial doctrine and a minority’s struggle for equal rights to incite against Israel’s Arab citizens. 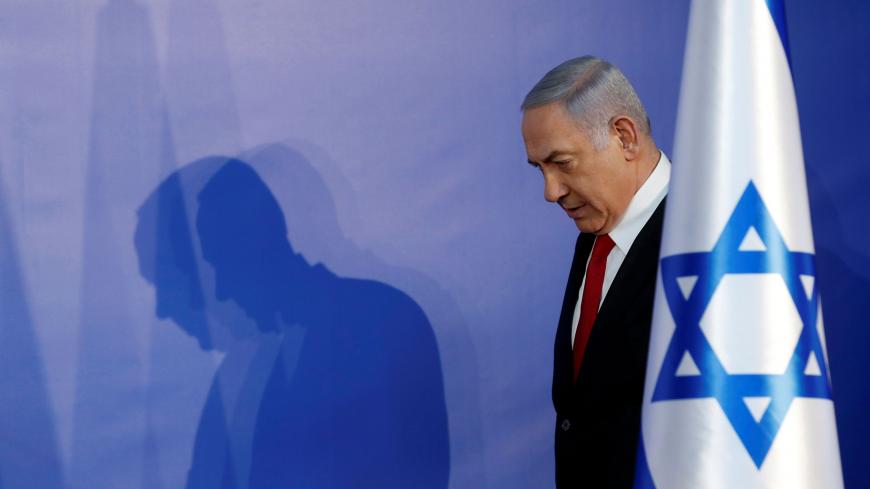 Israeli Prime Minister Benjamin Netanyahu arrives to deliver a statement to the media at his residency in Jerusalem, Feb. 28, 2019. - REUTERS/ Ronen Zvulun

It was only a matter of time before someone along Israel's political spectrum demanded that the Central Election Committee disqualify candidates from running in the April 9 elections for the 21st Knesset. Who would get there first? The left, seeking to disqualify right-wing candidates, or would representatives of the right beat them to the punch, demanding the disqualification of candidates representing the country’s 21% Arab minority? Either way, the outcome would stand to be a foregone conclusion. Barring a shocking decision, the Supreme Court will overrule any election committee disqualifications.

Lawmakers from the left-wing Meretz and the center-left Labor Party were the first to the committee’s door, demanding that it bar Michael Ben Ari and Itamar Ben Gvir of the radical-right Otzma Yehudit (Jewish Power) from running as part of the Union of Right-Wing Parties. Their petition, delivered Feb. 26, cites reports by human rights organizations that the two men have engaged in incitement to racism, one of three legal grounds for disqualification.

The following day, the Likud petitioned the committee to demand that the Arab Ra’am-Balad’s representatives be prohibited from running. At the same time, Ben Ari and Ben Gvir sought the disqualification of two other Arab parties, Hadash and Ta’al. Their petition cited the two other grounds for banning Knesset candidates: negation of Israel’s right to exist as a Jewish state and support for armed struggle against Israel.

In an opinion submitted to the election committee, Attorney General Avichai Mandelblit stated that he supported banning Ben Ari but opposed disqualifying Ben Gvir and the Arab slates. As expected, both the right and left expressed disappointment with Mandelblit’s position and turned him into the punching bag de jour in the volatile arenas of Israeli politics and the media.

On March 6, the election committee rejected Mandelblit’s recommendations and disqualified the only Jewish candidate from Hadash, Ofer Kasif, along with the Arab Ra’am-Balad slate. On the other hand, the committee authorized the candidacy of Ben Ari. The next round in these struggles will take place at the Supreme Court. Whatever the court rules, it will come under heavy fire from both sides.

In 2003, the Supreme Court, in a rare unanimous decision by an 11-justice panel, rejected the Central Election Committee’s decision to prevent Israeli Arab Knesset member Ahmad Tibi from running for the 16th Knesset. Six years later, in 2009, nine justices accepted an appeal by the Arab Ra’am-Ta’al list and overturned the committee decision to prevent its members from running for the 18th Knesset. A majority of eight justices also ruled against the committee’s decision to disqualify Balad. The justices wrote that the committee by its very nature was a political body, and its considerations were distinctly political, negatively affecting its members’ objectivity and the seriousness of their deliberations.

“No in‐depth discussion of the submitted evidence was held,” wrote Chief Justice Dorit Beinisch, outlining the court’s 2009 ruling, adding that committee members had also failed to address the attorney general's arguments. “The discussion was conducted in the format of slogans without establishing a sufficient evidentiary infrastructure as mandated by the seriousness of this issue.”

Beinisch further stated that disqualifying candidates, even if their party is not a democratic one, contradicts the basic democratic principle of a free marketplace of ideas and may even constitute abuse by a majority in oppressing a political minority. “On the other hand,” the justices asserted, “a democracy has a right to defend itself against those rising up against it.”

On the eve of the 2015 elections, the country’s top court overturned the Central Election Committee’s decision to bar the candidacy of Haneen Zoabi from Balad and Baruch Marzel, a disciple of the late extremist Rabbi Meir Kahane. Justice Hanan Melcer, who currently heads the election committee, wrote at the time that despite Zoabi and Marzel’s harsh pronouncements and actions, they “were insufficient to allow their disqualification.”

This brings to mind a question: Who is a greater threat to Israel’s democracy? Is it the Kahanist duo from Otzma Yehudit appended to a rather marginal right-wing alliance or the sitting prime minister, Benjamin Netanyahu, who has excoriated every pillar of that democracy — the judiciary (denouncing both the attorney general and the state prosecutor), law enforcement (denouncing impartial police investigators as well as the police commissioner) and the press (attacking independent journalists from the print media to television).

Who has spread hatred of the Arab minority among wide swathes of the Jewish public? Was it the attorney Ben Gvir or the prime minister who tried to scare voters by warning in 2015, “Arab voters are heading to the polling stations in droves,” and who plants seeds of hatred against anyone he labels a “leftist,” which means anyone who doesn’t suck up to him?

Netanyahu is currently exploiting a fraudulent symmetry between Kahane’s racial doctrine and a minority’s struggle for equal rights to justify his insistence on Otzma Yehudit’s Knesset run and to incite against Israel’s Arab citizens. He describes his controversial alliance with Otzma Yehudit, which advocates the expulsion of Israel’s Arab citizens, as forging a “Zionist bloc” to counter the “Arab bloc,” which is supposedly conspiring to wipe out Israel.

Netanyahu is not alone. In January 2013, Yair Lapid, chair of the centrist Yesh Atid, at the start of his political career, made the notorious and offensive pronouncement that he would not serve in any government that relied on the support of “the Zoabis,” a reference to Haneen Zoabi and her fellow Arab lawmakers. (He later retracted his use of the term.) These days, Lapid and his co-chair of the Blue and White alliance, Benny Gantz, spooked by Likud propaganda depicting them as collaborating with the Arabs, have been quick to shake off any hint of a potential partnership with Arab parties.

Rather than declaring all-out war against the de-legitimization campaign by right-wing and centrist parties against anyone who is not a member of their political Jewish camp, the left is essentially cooperating in the disqualification of Israel’s Arab citizens. Ben Gvir and Ben Ari are diverting attention from the main enemy of Israeli democracy, serving as camouflage for Netanyahu.